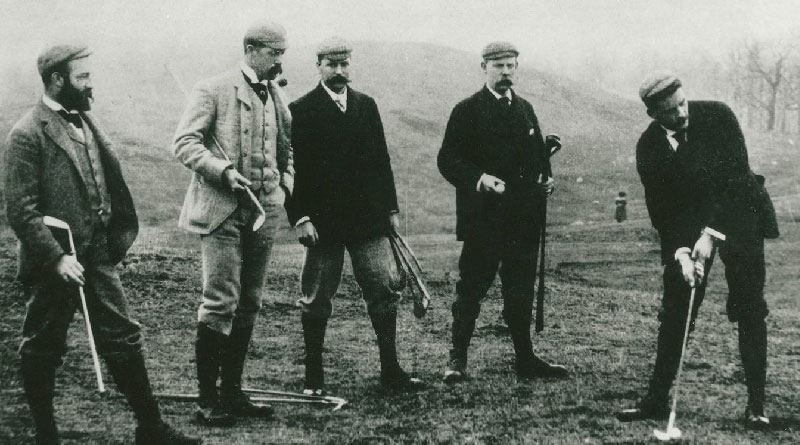 The news that the USGA would be holding the 2010 U.S. Amateur and 2015 U.S. Open at a course in the Pacific Northwest, Chambers Bay near Tacoma, was wonderful to hear.

I first visited the new layout, crafted by Robert Trent Jones Jr. and his design associates Bruce Charleton and Jay Blasi, about seven months before it opened in 2007 and was immediately smitten by the links planted wall to wall with fescue. Situated along the banks of Puget Sound just west of the Tacoma suburb of University Place, Chambers Bay embodies our naturally gifted region as well as the great game of golf. There are few places left in the world with such a grand location, so it was especially comforting that Pierce County Executive John Ladenburg had the foresight and success in building the golf course – and soon attracting two world-class championships – for the former blighted gravel quarry.

[Author’s Note: This story, written in 2008, has undergone slight modifications for currency. The U.S. Amateur (won by Peter Uihlein) was a success, though a couple of spectators broke their ankles while walking across the slippery fescue-covered dunes at Chambers Bay. As a result, the USGA altered the traffic patterns for the U.S. Open five years later, resulting in a poor spectator experience. Also, because of unseasonably hot and dry weather, the fescue greens had been invaded by poa annua for the Open (won by Jordan Spieth), causing bumpy putting surfaces that led to criticism from many players. In 2018, Chambers Bay was closed for several months to convert the greens from fine fescue to poa. Pierce County is hoping to draw another national championship. It has support from the USGA’s John Bodenhamer, a Tacoma native and the organization’s Senior Managing Director, who oversees the tournaments.]

Yet, without recognition by all of golf’s major publications, it’s possible Chambers Bay and its site overlooking Puget Sound and the Olympic Mountains might have become just another best-kept secret. As a Northwest native and someone who’s written several books devoted to golf in the region (including three editions of “Golf Courses of the Pacific Northwest” and as co-author of “Championships & Friendships: The First 100 Years of the Pacific Northwest Golf Association”), it’s my pleasure to indoctrinate those of you unfamiliar with the game in the upper-left-hand corner of the U.S.

So, here’s a primer from an unabashed supporter of the game and my neck of the woods.

Even though the region – including Washington, Oregon, Idaho, Western Montana and British Columbia in Canada – boasts some of the oldest golf clubs in North America, with several founded before the first-ever U.S. Open in 1895, it’s been well over a century for golf’s biggest championship to make it to Northwest.

It’s appropriate that a course in the City of Destiny will host a U.S. Open since it’s the home of Tacoma Country & Golf Club. Originated in 1894, Tacoma C&GC is the oldest private golf club west of the Mississippi River. Over the years the USGA has noted the club’s rich heritage, as the facility has hosted several national events, including the 1961 U.S. Women’s Amateur, 1984 U.S. Senior Women’s Amateur, 1994 U.S. Women’s Mid-Amateur and the 2007 USGA Junior Girl’s.

With an office now in Federal Way, south of Seattle, the Pacific Northwest Golf Association is the fifth oldest golf association in North America. Founded on February 4, 1899, the PNGA (headed by Bodenhamer before he went to work in Far Hills, N.J.) is preceded only in age by the USGA (1894), Royal Canadian Golf Association (1895), the Golf Association of Philadelphia (February 5, 1897) and the Metropolitan Golf Association (Greater New York City – April 14, 1897).

By 1898, six strong golf clubs existed in the Northwest that formed the foundation of the PNGA. In British Columbia, there was Victoria Golf Club (founded in 1892), while down south in the continental U.S. were Tacoma, Waverley Country Club ( 1896) in Portland, Seattle Golf Club (whose roots stretch back to the mid-1890s and its original site on Lake Union just north of downtown), Spokane Country Club (1898) and Butte Country Club (late 1890s). News accounts in Victoria’s Daily Colonist show that invitations to join the nascent organization were also extended to golf clubs in Vancouver, B.C., Walla Walla, Wash., and Eugene and Pendleton in Oregon.

Other historic clubs in Washington that have passed their centennials include the Country Club of Seattle (1896), Wing Point on Bainbridge Island (1903), Downriver in Spokane (1907), and Everett CC and Touchet Valley (both 1910) in Dayton on the eastern side of the state. Jefferson Park in Seattle – the playing grounds of a young Fred Couples – was one of the nation’s first municipal courses when it debuted in 1915. The course celebrated its 100th anniversary when the U.S. Open came to the Puget Sound region for the first time.

To the south, golfers were seen wielding mashies and spoons on the dune lands of Oregon’s northern coast in the late 1880s in Gearhart. Besides Waverley, Eugene Country Club originated in 1899 and Tualatin, south of Portland, was built in 1912.

The first course in Idaho, Hayden Lake Country Club just north of Coeur d’Alene, began greeting golfers in 1907. The course was designed by the imminent landscape architect J.C. Olmsted of Brookline, Mass. Olmsted also designed New York’s Central Park and Seattle’s park system. President William Taft rumbled around the resort-style course during a visit in 1909. After his round, the notorious trencherman had dinner at the resort’s Bozanta Tavern, later proclaiming that a mighty feast of fresh-caught bass, partridge, haunch of venison and bear cub – all accompanied by side dishes and washed down with Moet and Chandon champagnes – was one of the best meals of his life.

The Northwest has generated its fair share of great players. Besides “Long Jim” Barnes and “Boom-Boom” Couples (1992 Masters champion and winner of 64 pro tournaments worldwide), other great male golfers from the region include: H. Chandler Egan (who became a notable architect after moving to Medford, Ore., was the U.S. Amateur champion in 1904 and ’05); Dr. Oscar Willing (Walker Cupper in 1923, ’24 and ’30); Bud Ward (U.S. Amateur champion in 1939 and ’41; fourth in 1937 U.S. Open as an amateur); Jack Westland (1952 U.S. Amateur champion at age 46); Al Mengert (many titles both as an amateur and a pro); Portlanders Bruce Cudd and Dick Yost (Walker Cup teammates in 1955); Kermit Zarley (NCAA champion in 1962 and longtime PGA and Senior Tour regular); Jim McLean (the Seattleite became one of the nation’s top golf instructors after being a top amateur with wins in the PNGA Men’s in 1969, ’71 and ’72 as well as the Northwest Open in ’70).

Other notables include Peter Jacobsen (one of golf’s most popular players still resides in Portland and remains a life-long Waverley member; “Jake” was an NCAA All-American at the University of Oregon before turning pro and garnering seven PGA Tour wins, with two on the Champions Tour, including the 2004 U.S. Senior Open); Bill Sander (1976 U.S. Amateur winner and erstwhile PGA Tour regular); John Fought (1977 U.S. Amateur champ and two-time PGA Tour winner who’s now a successful golf architect); Rick Fehr (U.S. Open low amateur in 1984 and a two-time winner on PGA Tour); Kent Myers (four-time winner of the Oregon Amateur and an astounding 19-time member of Hudson Cup amateur teams); and Ryan Moore of Puyallup, Wash., who in 2004 had a year for the ages with victories in the U.S. Amateur, U.S. Public Links, NCAA Championship, Western Amateur and Sahalee Players Championship. Moore is now on the PGA Tour.

Women golfers from the Northwest have made a serious mark on the national scene. These include Grace (DeMoss) Zwahlen, Curtis Cup Team member in 1952 and ’54; Edean (Anderson) Ihlanfeldt, who won the 1953 Women’s Trans-Mississippi and the U.S. Senior Women’s Amateur in 1982; Pat (Lesser) Harbottle, U.S. Junior Girls champion in 1950, U.S. Women’s Amateur champion in 1955, Curtis Cupper in 1954 and ’55, and the first woman to receive the Seattle Post-Intelligencer’s “Man of the Year” award in ’55.

During a 13-year span, there were only two years – 1959 and 1967 – when a woman from the Northwest was NOT in the final of the U.S. Women’s Amateur. JoAnne (Gunderson) Carner won that championship in 1957, ‘60, ’62, ’66 and ’68 and was a four-time member of the Curtis Cup before turning pro. The Kirkland, Wash., native was dubbed “The Great Gundy” after storming the LPGA Tour during a career in which she won 43 times and earned a spot in the World Golf Hall of Fame.

Besides competitors, the Northwest has produced several important figures in golf. Perhaps foremost among these was Robert Hudson. The owner of a Portland grocery firm, Hudson was directly responsible for keeping the Ryder Cup alive by personally funding the post-war 1947 matches at Portland Golf Club and making sure the Great Britain team had the wherewithal to make it to the event. He was also instrumental in the Rose City’s hosting of three Portland Opens, a PGA Championship and the Western Open.

It was in an empty ice cream stand at Portland Golf Club during the 1946 PGA Championship – won by Ben Hogan – that the Golf Writers Association of America was founded by Chicago Tribune golf editor Charles Bartlett, Associated Press editor Russ Newland, and George Bertz, sports editor of the Oregon Journal. In 1947, the GWAA honored Hudson with its Man of the Year award. The Portland grocer also originated and funded the Hudson Cup Matches, an annual event that still pits the best Northwest professionals against the region’s top amateurs.

Another name worthy of mention is Jeff Ellis, a fine amateur in his day who was a three-time Hudson Cup player and a finalist in the 1984 U.S. Mid-Amateur, the same year he won the PNGA Men’s. During his playing days Ellis, a resident of Whidbey Island, began collecting antique golf clubs. In 1997, he published the first edition of “The Clubmaker’s Art,” a massive four-color tome that Golf World later named as among the top-10 golf books of the 20th century. Travel & Leisure went one step further, calling it one of the top-25 golf books ever written. In late September 2007, Sotheby’s sold most of Ellis’ club collection at auction for a record $2.166 million.

Finally, the region produced one of the most prolific golf course architects in the nation, Arthur Vernon Macan. Born in Ireland, Macan immigrated to Victoria, B.C., in 1912. A year later he won the PNGA Men’s Amateur. In 1914, Macan was routed by Jack Neville of Pebble Beach fame in that same tournament. After losing his left foot during the Battle for Vimy Ridge in World War I, Macan turned to design golf courses, primarily in the Northwest.

After a Northwest golf tour, the great Gene Sarazen said of Macan’s work: “Never before have I seen such beautiful golf courses. I’ve seen an architecture, something new, that has been in my mind for years and I am glad to see a man with A.V. Macan’s ability to bring it out. Every hole is different and each offers a real test if the player expects to get down to par figures.”

In 1987, the great Robert Trent Jones Sr. – the father of the man responsible for Chambers Bay, paid homage to Macan: “He was a generation ahead of his time. Players have become so proficient at playing short irons into greens. Macan’s philosophy is now being introduced to combat this skill.”