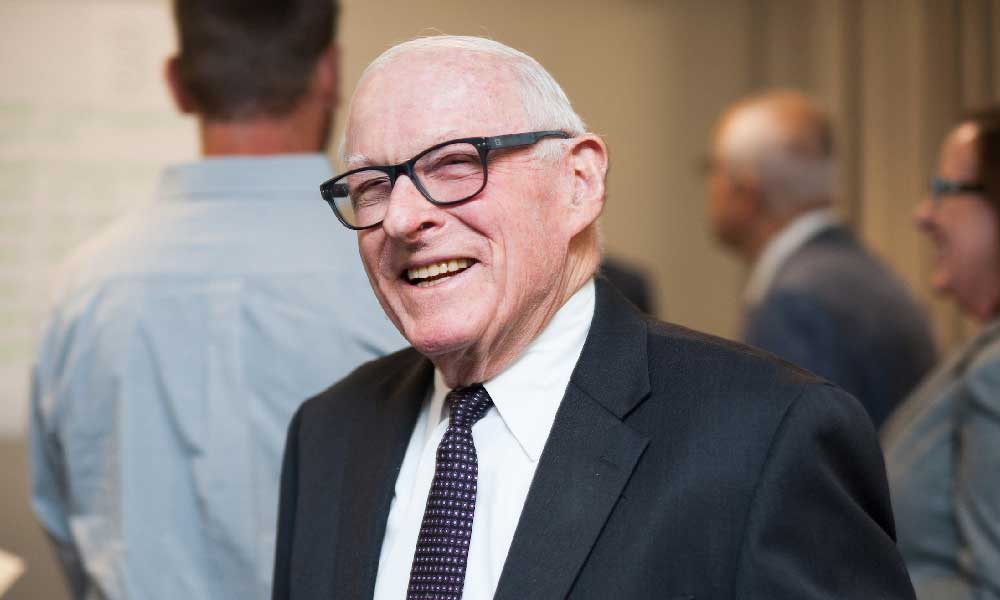 Anthony W. “Tony” LaFetra, president and CEO of Rain Bird Corporation, passed away on January 29, 2021. He will be remembered as a passionate business leader whose work has had a lasting impact on the irrigation industry, generations of Rain Bird employees and the community.

During Tony’s tenure, the small irrigation company in Glendora, California was built into the international market leader it is today – a company working hard to promote The Intelligent Use of Water™ around the globe.

Tony led the company’s transformation from a manufacturer of brass impact sprinklers, primarily used in agriculture, to a leading provider of irrigation products used worldwide in landscapes, golf courses, sports fields and farms. He stated that, “The irrigation industry brings moisture to crops and landscapes when the skies do not.”

Tony joined the business in 1964, first serving as a plant manager and later taking on the roles of vice president of sales and marketing, and then executive vice president. In 1978, he succeeded his mother, Rain Bird’s co-founder, Mary E. LaFetra, as president and CEO.

Tony’s tenure was highlighted by innovations that revolutionized the irrigation industry, from the world’s first computerized central control system for irrigation management in the 1970s to the launch of subsurface drip irrigation to save water and reduce the need for herbicides.

Tony stood for quality in everything he did. He set high expectations for himself, for Rain Bird, and for its employees. Those who knew Tony know that he believed that values are integral to achieving success. Tony was a model of integrity, humility, hard work and care for others.

Tony was an advocate for education. He earned bachelor’s and MBA degrees from Stanford University. He was a life-long learner and placed high value on the education of Rain Bird employees. Many employees at Rain Bird attribute their college educations, advanced degrees and less formal education to the support that Rain Bird has provided to them over the years.

Outside of Rain Bird, Tony sat on the boards of directors of several universities. He most recently sat on the Board of Trustees at the University of La Verne, and he donated generously to establish the LaFetra College of Education. Tony once shared, “I know that education transforms lives… so I dedicate my gift… knowing we can impact generations of future teachers and students.”

Tony was also passionate about giving back to the community. He instilled these values at Rain Bird, encouraging employees to donate their time to local communities. Tony supported many organizations, including but not limited to, the Theodore Payne Foundation, Citrus College Foundation, California Native Plants Society and the United Way.

In his free time, Tony enjoyed fishing and hiking and the botany of the Southern California deserts and mountains. On weekends he would escape to his cabin in the nearby mountains, where he was known to enjoy improving his property using his bulldozer.

Tony encouraged Rain Bird employees to enjoy time outside of work and to take care of their health. He promoted exercise, positivity and gratitude.

Tony will be sorely missed. He performed his job with distinction. May he rest in peace.

Based in Azusa, Calif., Rain Bird Corporation is the world’s leading manufacturer and provider of irrigation products and services. Since its beginnings in 1933, Rain Bird has offered the industry’s broadest range of irrigation products for farms, golf courses, sports arenas, commercial developments and homes in more than 130 countries around the globe. Rain Bird has been awarded more than 450 patents worldwide, including the first in 1935 for the impact sprinkler. Rain Bird and The Intelligent Use of Water™ are about using water wisely. Its commitment extends beyond products to education, training and services for the industry and the community. Rain Bird maintains state-of-the-art manufacturing assembly facilities in the United States, China and Mexico.  www.rainbird.com.