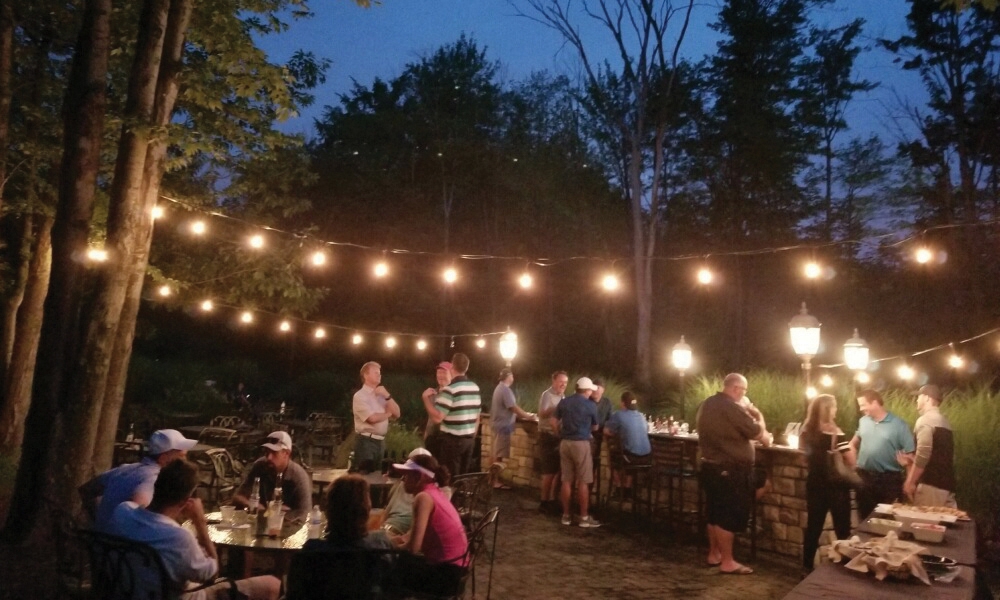 Most golfers would say they are purists when it comes to the game. They yearn to experience the ambiance of Augusta, the spirit of St. Andrews and those rare and fleeting breakthroughs when they humble their home course with a flawless drive or a perfect putt. But they also want a cold beer, good greens, golf carts with GPS, tasty food and a host of other creature comforts. For directors of golf, superintendents, member committees and other facility decision-makers, the struggle to balance the authentic golfing experience with modern-life amenities and indulgences is real.

The management at StoneWater Golf Club, however, seems to have struck upon the right recipe for supporting both the aesthetics of the game and the preferences of those who play it. The eighteen-hole, public-private course, situated twenty minutes east of downtown Cleveland, Ohio, has a growing membership, a busy schedule of private events, top-notch playing conditions and a restaurant that’s garnering awards while growing a loyal base of local patrons.

Key ingredients in this recipe for success are three sisters who grew up in the Gates Mills community, just minutes away from the course. In 2015, Whitney, Lindsey and Kathryn Neidus, along with their father Stuart Neidus, became partners in the ownership of the golf course and the clubhouse restaurant, the Rustic Grill. Each sister brought a skillset to the collaboration about which Lindsey says, “It wasn’t as much a plan as it was an opportunity.”

In Life, the Shortest Distance Between Two Points is Rarely a Straight Line

Lindsey’s professional background started at Kent State University and included a year of study in Italy and then ten years in New York City where she worked first as a stager for photoshoots and later as an event and marketing manager for Dow Jones. Whitney, a graduate of Bowling Green State University, was a teacher before becoming a party and event planner.

Youngest sister Kathryn is a trained chef, who started out in life studying advertising at Kent State University before shifting her direction. After receiving her degree in hospitality management from Kent State, Kathryn entered the New England Culinary Institute in Montpelier, Vermont. There, she received two years of training, followed by a host of impressive internships and employment that spanned from biodynamic farming to a Michelin 3-star restaurant, a restaurant that served traditional French cuisine and a pub-style eatery renowned for its upscale tavern food.

With Stuart as managing partner, Lindsey handles marketing, public relations and business development, Whitney is the event director and manager, and Kathryn is the restaurant’s head chef.

Launching their joint venture under the name “Le Tre Sorelle,” which is Italian for “The Three Sisters,” Whitney, Lindsey, and Kathryn’s first step was to close the restaurant at the golf club. In June of 2016, six months after closing the restaurant’s doors, renovations were completed, and the restaurant opened for business again.

Club members and locals were initially skeptical about the new ownership. Lindsey describes the attitude as one of distrust, from a patron base that had seen a lot of turns over and limited success. “This has been more work than anything I have ever done,” she observed, “but so worth it. We just had to earn people’s trust.”

With Whitney’s event planning experience, supported by the talents of her sisters, StoneWater Golf Club now has a busy schedule of private events from weddings and receptions to reunions and retirement and special event parties, even clambakes, bar mitzvahs, and corporate outings.

And the clubhouse restaurant is buzzing. Listening to the sisters describe activities that are now a regular part of life at StoneWater Golf Club, it’s easy to tell how focused the sisters are on making the golf course a cornerstone of the community. How else would you account for the restaurant regularly serving up 200 or more burgers in four to five hours on Burger Night? Or on movie night attracting 70 to 80 kids who arrive wearing their pajamas and ready for a pizza and popcorn menu while their parents enjoy a quiet dinner in the adjoining dining room?

During the winter, the Rustic Grill now features $7 Burger Nights, Pasta Thursdays and Live Music Saturdays. From June through September, there’s monthly Rib Nights with “two bucks a bone” dining and a custom smoker built specifically for the restaurant, plus Taco Tuesdays, Sunday Brunch, and a very popular Wine Down Wednesday where parents do the wining while their kids work on their golfing skills.

“We’re a modern club,” said Lindsey, “not a traditional country club. We’re located in a residential community that includes young families, empty nesters, couples and retirees. Our servers know people by name, and we’re filling a role that is mutually beneficial to the community.

“Our approach is holistic. And what we’re doing has not only grown the restaurant and event business, it has increased rounds of golf. Each area is a springboard for other aspects of the business.

It’s All In the Family

Of course, when the three sisters spend so many long hours, pouring their time and talents into this labor of love, we had to ask the obvious question, “Is it difficult to work with your family members day after day?”

Lindsey acknowledges they have their moments, like any sisters, but conflicts are usually forgotten in twenty minutes. “We’re super close,” she told us, “and we have similar senses of humor. We all bring our own area of expertise, and if there’s a problem, we will figure it out, us three. If not, our parents are involved in the business, and we can always turn to them.”

Dad says, “They’re the ones who run the place. And they’re doing a terrific job.”

A Recipe for Success

When asked what insights she would share with other women seeking to get involved in the golf business, Whitney told us, “I would tell them to go for it. A golf course can sometimes be a male-dominated environment, but a woman puts a special touch on a golf course.

Sounds like great advice from the talented trio behind a restaurant and event site that has doubled its business, become a popular community hub and inspired Cleveland golfers to go to the course more often and stay longer when they go.