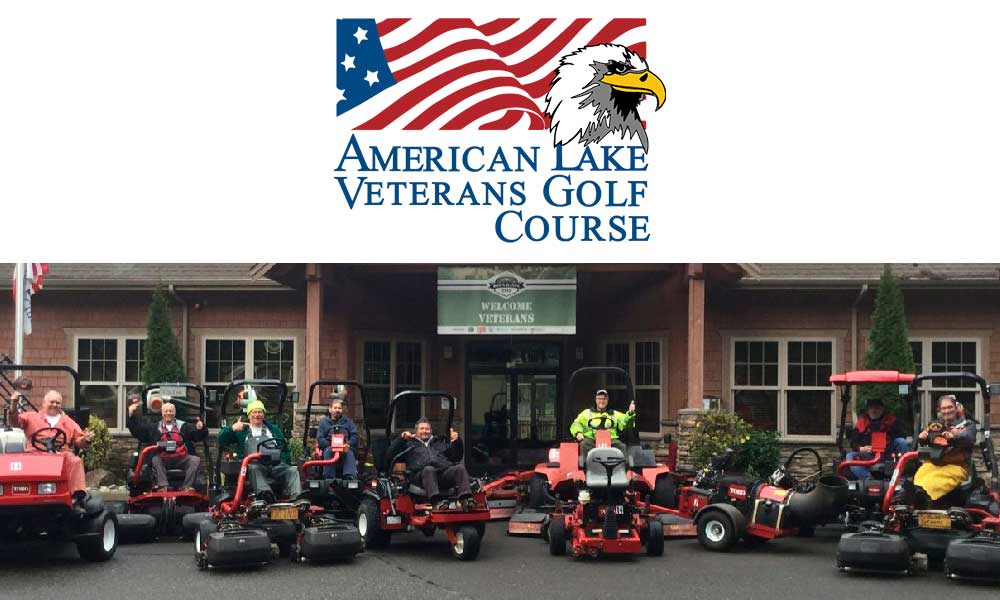 The game of golf means different things to different people. For some, it’s a chance to enjoy the outdoors and share some laughs with friends. For others, it’s an opportunity to flex their competitive muscles and challenge themselves to beat their own personal records. And for a very special group of people, at a very special golf course, the game can be downright therapeutic in every sense of the word.

For real-life American heroes — veterans and active duty service members — there’s a place where they can go to play a round of golf and receive the rehabilitation, therapy, socialization and support that many veterans need to live a productive life post-combat. Located on the grounds of the VA hospital in Lakewood, Washington, American Lake Veterans Golf Course is the only golf course in the nation that provides low-cost rehabilitative and recreational golf opportunities for veterans, both wounded/disabled and active military personnel. Blind golfers, amputees and veterans recovering from emotional trauma and other injuries can join in camaraderie and support by doing something many take for granted — playing a simple game of golf.

Golf course superintendent, Randy Moen, is no stranger to the substantial amount of time, money and patience it takes to maintain a fully-functioning first-class golf course, especially one that accommodates players with all different kinds of abilities. Some golfers have lost limbs in combat, others are paralyzed, and in many cases, the wounds aren’t necessarily visible. Moen’s course can accommodate them all.

Because of the wide range of needs for this specific clientele to have an amazing golfing experience, Moen admits that implementing the proper accommodations on the golf course has been a learning process every step of the way. That said, the management team has been completely committed to providing solutions for players of all abilities and skill levels.

For example, the integration of Power Tees on their course provides an automatically teed ball — especially useful for players with limited mobility. Paragolfer golf cars are also commonplace on the American Lake Veterans Golf Course, allowing those unable to walk the course unlimited access to all areas of the facility, including but not limited to the ability to drive in and out of bunkers. Additionally, the course provides swing trainers to help golfers improve their game, and it goes without saying that the course facilities and restrooms are compliant with the Americans with Disabilities Act (ADA).

The American Lake Veterans Golf Course was a venue familiar with American heroes in the area, including former General of the U.S. Army, and chairman of the Joint Chiefs of Staff from 1993-1997, General John Shalikashvili. General Shalikashvili passed away in 2011, but spoke fondly of his time on the American Lake Veterans Golf Course. “I am only one of the thousands of veterans benefiting from golf at American Lake. Unlike many veterans, I was lucky not to lose legs or arms in combat. But when a stroke left me partially paralyzed, the golf program at American Lake helped my recovery.” At the time of General Shalikashvili’s comment, the ALVGC was in the process of building nine more holes. The hope according to Shalikashvili was that the expansion would “give every disabled veteran the chance they deserve.”

This therapeutic experience for veterans is a universal feeling among patrons and staff alike. Harold “Pepper” Roberts, a retired teacher, golf pro, and veteran of the Korean War, echoed General Shalikashvili’s sentiment. “Golf is mostly understood to be a ‘gentleman’s’ sport, and the whole feeling around it is just the opposite of a war setting.” Roberts, a well-known name at ALVGC, is credited with setting up a non-profit organization for the golf course that allowed the course to raise funds, effectively setting the course up for a sustainable future.

American Lake Veterans Golf Course is more than just a golf course, and attracted some major names in professional golf like Ken Still. Before his passing in 2017, Still commented on how ALVGC created a place where people could come together and make a real difference in their own lives and the lives of others. “These guys defended the great country of the United States of America, and it’s a pleasure to be part of their lives. I can’t give enough for these people. These are guys, of all races and backgrounds, who defended our great country. When I look around here, I see those who’ve served, during their military careers, and those who continue to serve in the capacity of a golf course volunteer. It makes for meaningful lives.”

Anecdotes from the players and volunteers at American Lake Veterans Golf Course, such as General Shalikashvili, Roberts and Still, are both inspirational and commonplace all at the same time. For the staff at American Lake Veterans Golf Course, these stories are the drivers behind why they do what they do — providing an outlet for veterans to enjoy a round of golf, while accommodating their specific needs.

For this veteran-owned, volunteer-operated golf course, the challenge of sustaining a pristine golf course, customized to meet the needs of their disabled clientele with limited funding is no easy task. Since 1995, the operation of the course was maintained entirely by private donations, and for a long time, much of the turfgrass maintenance equipment in their fleet — that is so vital to a golf course — was second-hand or donated. As they grew, and after setting up a non-profit organization in 2003, they became more comfortable investing in their own operation and were able to gradually make necessary equipment and irrigation upgrades.

According to Moen, they’ve tried out a lot of different equipment over the years and forged a fantastic relationship with a local Toro distributor, Turf Star Western. “We were dealing with old equipment, and once we got to a point where we felt good about making some capital investments, we’ve had a great relationship with Turf Star Western for years, and so we knew we wanted to build our fleet with them.”

“Plus, Toros are bulletproof. Our course quickly went from a pasture to a really high-quality golf course because we had the right equipment.” In addition to his confidence in the turf maintenance equipment, Moen also touts the benefits of the new Toro Lynx Central Control System, which allows his team to manage the water resources on the golf course all in one place, conveniently combined into a single, intuitive interface.

Over the years, American Lake Veterans Golf Course has continued to provide a relaxing, therapeutic and accepting environment by creating a place where veterans can support each other through golf. And now they can invest in quality equipment, they can provide these veterans with a world-class golfing experience.

Along with updating their fleet of equipment, American Lake Veteran’s Golf Course also added nine more new holes — the “Nicklaus Nine.” Their goal now is to complete more improvements to the original nine holes to provide greater accessibility to the veterans. Moen expects to be able to continue adding services, creating an amazing experience for veteran golfers well into the future. For more information on ALVGC, please visit veterangolf.org.

How Superintendents Prevent Cup Damage and Speed up Play?
Greetings from the Road, Thanks for All You Do
To Top