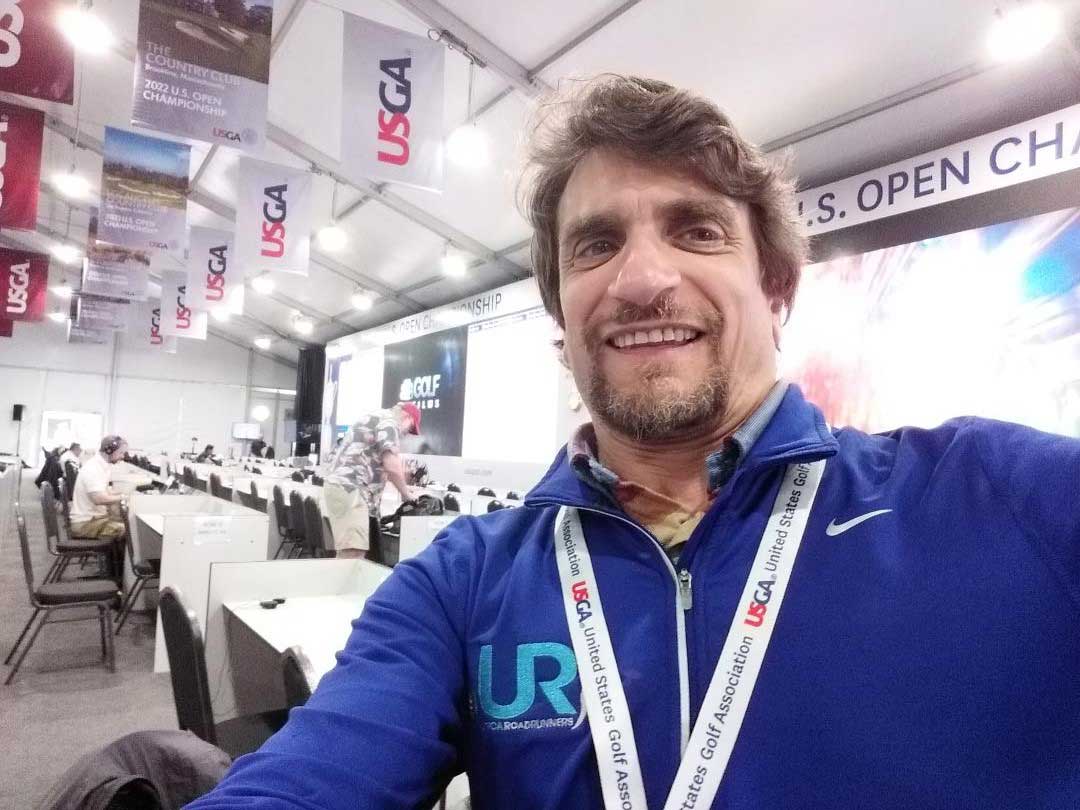 Something a little different from me this month: With the PGA Championship and U.S. Open being moved to the fall, I’ve been hustling to cover the tournaments with a virtual pass instead of my usual spot in the press tent. The upside is that I also get to see how courses around my region are riding out the Coronavirus. It’s great to see the way the whole golf industry came together and to see golf lead the nation’s sporting recovery with its baked-in Covid protections. We are nothing if not ingenious and resourceful.

Also, the wonderful news of Golf Course Trades’ 30th anniversary got me feeling both nostalgic and grateful. I can personally assure you that the staff and admin here at GCT are the kindest people you’d ever want to meet; the ethos and virtues of our glorious game are in good hands with people like the Wilsons and GCT at the vanguard of the golf media. I also celebrate an anniversary this fall, my 16th as a sports writer, and as we go to press, I’ll have covered my 16th consecutive Open and 30th major championship overall, along with a wide array of professional and amateur tournaments. So I thought I’d just share a few laughs and memories with you. After all: you supers are the engine that keeps golf running. Watching the dedication you put forth under ordinary circumstances is inspiring enough, but the way the industry not only pulled together but thrived during this pandemic is a testament worthy of the foundational values of the game. So thank you for all you do. Here’s a look at some of my favorite memories from the last 16 years of tournaments.

I hope you all got a close look at Winged Foot, because that is the archetype of Golden Age golf course restoration. Phenomenal green contours, vertical movement in the earth, five-inch rough, and an oppressive history make playing a round of tournament golf at Winged Foot akin to driving on black ice…and I had a birds-eye view of the worst crash ever on that green when not just Phil Mickelson, but Padraig Harrington, Colin Montgomerie, and Jim Furyk all dropped the U.S. Open trophy on the ground for Geoff Ogilvy to pick up and take back to Australia.

I was looking out the second story window of the men’s locker room with the NBC camera next to me and the New York Post’s Mike Vaccaro on the other side when Phil hit the tree at the 18th with his second shot, dooming him to double bogey. I turned to Mike and said, “My God, we’re watching a snuff film…”

There is only one course more blood-thirsty than Winged Foot, and that’s Oakmont. Sharpened to U.S. Open difficulty 365 days a year, Oakmont delights in its imprimatur as the hardest course in America. Ludicrous rough, reedonkyulous green speeds, and among the most devilish green contours on Earth, Oakmont also was the club responsible for bringing Golden Age golf restoration into the 21st century.

“You can grow trees, or you can grow grass, but you can’t grow both,” that’s essentially what the USGA told Oakmont when they expressed interest in continuing to host the U.S. Open. A tree clearing campaign in the middle of the night started, and the end result was healthier turf and two more wildly successful U.S. Opens. A great grassy ski slope – that’s how I described it in 2007 when I saw it the first time. That tournament also gave me one of my best headlines for an article. When Angel Cabrera (called El Pato – “the Duck,” because of how he walks) held on to defeat Tiger Woods by one shot my article trumpeted “DUCK BITES TIGER!”

Pebble Beach is always a majestic setting for a golf tournament. Forest-fragrant, wine-scented NoCal air is good for the soul. Plus the literary history of John Steinbeck comes alive in Monterey. Oakland Hills in Michigan was the most pleasant surprise by far, with its cunning serpentine routing and intricate Donald Ross greens. And keep a careful eye on Chambers Bay, the Robert Trent Jones, Jr. public course that hosted the 2015 U.S. Open. It got a bad rep unfairly that year when – through no fault of anyone – some greens got bumpier than they should have been for a U.S. Open. But that’s been rectified, and Chambers has grown into one of the greatest seaside courses in America. Despite the pros’ bellyaching, look for it to host another Open within the next 15 years.

Sports writers have a ringside seat for history and drama. Sadly, Phil’s Icarus-like fall is a time capsule moment in sports history for all the wrong reasons. Nevertheless, it was the most riveting, mesmerizing finish I’ve seen in person.

Tiger’s final six holes on Saturday where he went 6-under for that stretch and holed out shots from Los Angeles, Reno, and Scottsdale was the single most incredible run I’ve witnessed and was the catalyst for his comeback win while battling a hairline fracture in his leg. It was just as strong as the record-tying (at the time) 63 he posted in 99 degree heat during the second round of the 2007 PGA at Southern Hills.

I love Oklahoma, by the way, and can’t wait to return for the 2030 PGA Championship…so much so that I’ve started hydrating already.

We love historic finishes, so why does Padraig Harrington’s 66-66 on Sunday (he played 33 holes on the final day after rain washed out Saturday play) often get overlooked when we discuss the greatest finishes in golf history? Oakland Hills is still, to this day, ever bit the Monster that Ben Hogan dubbed it in 1951 when he closed with 67 wins the U.S. Open that year. So 66-66, even over a rain-softened golf course, is a downright epic finish over one of America’s quintessential golf courses.

Phil’s loved wherever he goes. Even at the Ryder Cup, European fns will always give him respectful reception and even a begrudging, but well-deserved ovation after another birdie eye-popping birdie.

Phil earned our respect. You know the old adage about how you can tell the true mettle of a person by how they act at their worst moments? After Phil gave away that 2006 Open at Winged Foot, he came out for forty minutes to meet with the press, answer every question openly, honestly and directly, and to apologize to his fans for letting them down.
Phil lost the trophy that day, but he won every golf fans’ hearts.

It’s not every day you get to drink Irish Whiskey out of the U.S. Open trophy, but thanks to my sharp-eyed friends Brian Keogh, Dermot Gilleece, and Karl MacGinty – the incomparable trio of quintessential Irish golf writers – I got to be in the right place at the right time for Graeme McDowell’s victory celebration at Pebble Beach in 2010. The place was so dark though, we couldn’t get a good picture – the Old Hubble Telescope took better pictures than my crappy Droid. That’s us in the picture, but I feel badly for Graeme. How can any of his friends see that he really truly was kickin’ it with Jay Flemma?!

How does the rap song go?

Seattle makes the list twice actually. During the 2015 Open at Chambers Bay, a pal arranged for me to stay on a friend’s boat for a few days. I thought, “okay, sounds cool and it’s something different…

I was not prepared for what awaited.

It was the biggest yacht on the water, by far and away dwarfing everything around it. I hate the word “gynormous,” but for once it actually fit. I took perverse delight in stepping onto the bow and shouting to the four winds, “HEY SMELLS! MY DINGHY’S BIGGER THAN YOUR WHOLE BOAT! SAVE ME A PARKIN’ SPACE. I’M COMIN’ IN!”

The joke was on me that night, though. I was the only one small enough to sleep in the forecastle – the very front of the boat – so I drew that berth and had to spend the night diagonally with my feet above my head and no pillow.

Then I spent three days in the home of my editor in chief at Cybergolf, Jeff Shelley. Jeff is a direct descendent, father-to-son, of Mary Shelley and Percy Byssche Shelley. (Mary Shelley wrote Frankenstein, for those of you scoring at home.)

Now the most prominent feature of the Shelley family guest room is two towering portraits of his ancestors, Percy and Mary, scowling down at you as you lay in bed. It was unsettling enough in the day time to drag behind me the silent reproach of their haunted disdained eyes, (the only thing they didn’t do was follow me around the room), but that night a storm out of the pages of the Book of Revelations tore through Seattle, and every time the lightning flashed the eyes of their portraits flickered with an evil, reddish witch-light. I had to hold in nervous laughter when Jeff asked me, “So, did you sleep well last night?” The only way I could have slept worse was if Dracula locked me in an iron maiden on Monster Island.

It really is the City of Champions, and getting to cover the Pittsburgh Penguins Stanley Cup parade as part of covering the 2016 Oakmont U.S. Open was fortuitous and fun. 350,000 people came out to cheer on the Pens that day. The entire population of the city of Pittsburgh is only about 300,000.

Major championships are a bacchanalia, a downright over-the-top la dolce vida. At Shinnecock I watched trophy club members get so drunk they had to be wheel-barrowed out, whereupon they would spend the night on someone’s yacht, sail the next morning to Fisher’s Island, play 18, and then sail back to Shinnecock and start the whole thing over again, just substituting Piping Rock or Friar’s Head for the round of golf. Sadly I could never join them; I was on deadline.

Minnesota, Oklahoma, and North Carolina have the nicest people and the best fans. N.C. also has the bonus of phenomenal public golf.

When not reporting live from major sports championships or researching golf courses for design, value, and excitement, multiple award-winning sports writer Jay Flemma is an entertainment, Internet, trademark, and banking lawyer from New York. His clients have been nominated for Grammy and Emmy awards, won a Sundance Film Festival Best Director award, performed on stage and screen, and designed pop art for museums and collectors. Twitter @JayGolfUSA