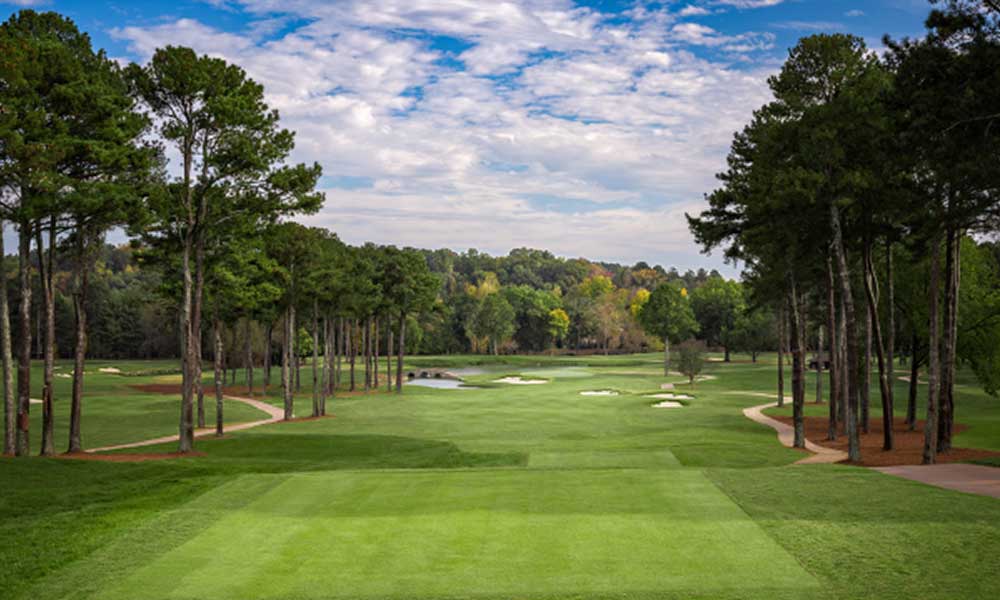 The Atlanta Athletic Club (AAC) has completed the renovation of its Riverside Course. Golf course architect Tripp Davis re-envisioned the routing, playing strategy, and visual quality of this storied course set alongside the Chattahoochee River.

The renovation of the course had three principal goals: completely update the course infrastructure from tee to green to allow for heightened playing conditions; accentuate the beautiful Riverside terrain in a more natural way; and enhance the playing interest and enjoyment for members and high-level players alike.

In updating the course infrastructure, tees, greens, and bunkers were rebuilt and repositioned; reshaping was done to develop sound surface and subsurface drainage; and a new state-of-the-art irrigation system was installed. Fairways were sand capped and replanted with Zorro Zoysia; roughs were replanted with Tiftuf Bermuda; far roughs were seeded with a fescue blend; and some tree removal was done, creating enhanced vistas across the beautiful property.

Davis focused on carefully moving dirt, so the course ties into the land in a natural way, allowing the overall site to shine. He carried this into the style of the bunkers, the way fairways are contoured, how greens sit on the land, and how tees tie off subtly to surrounding grades. Accomplishing this required the rerouting of holes 3, 4, 5, and 12, 13, and 14.

“I wanted the visual perspective the golfer has while playing to be more interesting, which on this site meant getting the ground to flow with and embrace the overall landscape. With the great trees, the rolling land, distinct ridge lines, and the river, it is such a majestic site, and we wanted the golf course to look and feel like it is just a part of that,” stated Davis. “Rerouting the holes was a vital part of this.”

To make the course more interesting and enjoyable to play, Davis employed a highly strategic approach to the placement and shape of tees, bunkers, fairways, and greens. Players can choose how aggressive or conservative they want to be, not being forced to play in a limited or prescribed manner. The design allows course setup to vary the level of challenge, from regular member play to national championships.

“Riverside can be setup to be a very enjoyable course for the membership on a daily basis, but we instilled design elements that will allow high-level events to test the best players in the game. We can grow the rough a little, speed up the greens, and use a variety of tougher hole locations to present a complete test,” said Davis.

Because match play is a prevalent part of regular member play and is often a part of the high-level events that come to AAC, Davis paid specific attention to how the course would flow strategically. The rerouting was in part done to have the course fit better on the land, but Davis also had in mind the ability to make match play more interesting. The first few holes now can set the tone for a match, while the new stretch of holes from 12 through 14 can flip a match, noting that most matches will not go past 15. Changes to 18 were also geared to make those matches that do go the distance more interesting by encouraging more aggressive play.

“Tripp has done an excellent job reimagining Riverside by making better use of the land, creating a unique style, and making the course both fun and interesting to play,” said John Stakel, board member and chairman of the Riverside Renovation Committee at Atlanta Athletic Club. “The infrastructure work will allow our Director of Agronomy, Lukus Harvey, to dial in playing conditions, notably allowing the course to play firmer and faster most of the year.”

“Riverside now has a more classic feel and playing quality, like a 1920s-era course that hasn’t been touched, which is exactly what we were trying for,” said Davis. “I am incredibly pleased with how the work turned out. In fact, it is better than I thought it could be. While we certainly tweaked small details, we did not change much from the original basic plan we developed. It all just fit.”

The Atlanta Athletic Club, which will celebrate its 125-year anniversary in 2023, has a mission to deliver an exceptional family-focused experience that consistently exceeds the expectations of all those served, while preserving the heritage, traditions, and reputation for championship golf. Consistently ranked among the top family athletic clubs in the country, Atlanta Athletic Club is renowned for personalized service and for serving as a social and recreational hub for members.