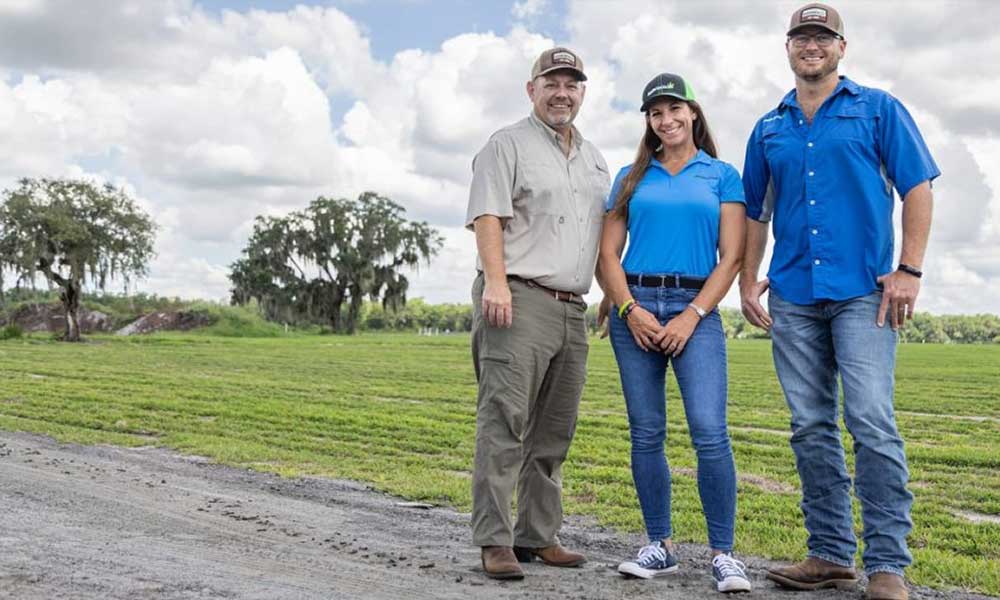 For the past 35 years, Bayside Sod has been supplying turfgrass along the west coast of Florida. It all started back in 1987 when Jack Bispham’s family left the dairy business and he decided to venture into the turfgrass industry. He started the business with a 20-acre field of St. Augustine grass in Sarasota, FL.

Unfortunately, his first field of St. Augustine did not survive and he had to start all over again. But that didn’t stop him. Bispham expanded from 20 acres to about 270 acres in the early 1990s and then in 2006 he added a second location, expanding the company to 350 acres.

She said that growing up on the farm, she didn’t have much of an appreciation for the farm like she does today. “I really didn’t develop a passion for it until I went to college and started exploring the options of what I liked and thinking about what I wanted to do. I ultimately decided to get a degree in horticulture and come back.While attending the University of Florida, Bailey realized her four siblings didn’t have any interest in joining the family business, so she started to think of coming back to work on the farm as an opportunity to help her dad and create a legacy. She came on board in 2006 and then her brother Paul Bispham ended up joining Bayside Sod as the Production Manager in 2016. Two of their sisters’ husbands also work for the business. Mark Royce is the VP of Sales and co-owns Bayside Sod with Bailey. The other brother-in-law, Evan Stobbs leads their logistics and service operations.

Bailey has been impressed by technological advancements for mowing, irrigating and fertilizing grass over the years. She said there has been more technology on soil and tissue samples and they’re able to grow a crop faster because of innovations that have come along in the industry.

“I’ll tell you what hasn’t changed is the people. I remember being young and my dad would take us to trade shows and field days and I always loved the people and they’re still that way. I think it’s a very collaborative industry. I love that and that hasn’t changed.”

Bayside Sod has grown to 900 acres consisting of six different turfgrass varieties. Bailey said the demand for EMPIRE® Zoysia is the highest it’s ever been and they’re harvesting all 80 acres they have as quickly as they can. She said in the past, when they first started selling EMPIRE it would take them a while to sell the 15 acres they grew.

Bayside Sod also grows CitraBlue® St. Augustine, the newest St. Augustine release out of the University of Florida. Bailey said the color of CitraBlue really stands out next to the other varieties it’s growing beside, especially when they take drone shots of fields. “Our customers really like that as well, so that’s definitely its standout attribute,” she added.

Bailey stresses the importance of research and development in the industry. Bayside works alongside the University of Florida and Sod Solutions which has allowed them to know and grow newer varieties that perform better in the field and landscape. “I think the collaboration in the industry is good all around.”

In 2019, Bayside Sod implemented the software platform Turf Logistics to help streamline business operations throughout the entire sod harvesting process. “It has helped us grow. We have six different locations and the company was getting beyond me taking orders from my cell phone while I was on the mower. We expanded to where I couldn’t be doing those types of things, so we hired another layer of employees and someone to run our office. Right when we did that is when we got Turf Logistics, so it just helped us get a running start. It was perfect timing,” Bailey said.

Two years ago, Bayside Sod started delivering orders and they incorporated the Turf Logistics truck routing. “It has been super helpful. Overall, it’s helped me as a business owner with some structure as I was growing the company.” Bailey also said she likes being able to see what is going on at each of their multiple farm locations from one software. “I love how it keeps communication between the harvesting crews and the office smooth,” she said.

When Bailey took over from her dad when he retired in 2019, Bayside Sod added its third and fourth farm. “I’d always wanted to grow the business because I love people. My favorite thing about my company is its employees. We have an absolute standout culture at Bayside Sod that has completely fueled our growth,” she said.

Bayside Sod has grown to 28 employees and since they have been expanding so much over the past few years, Bailey hired Jeff Murphy as the company’s COO about six months ago. She said this was to create some structure and help execute things better throughout the company with solid management in place. Murphy has a corporate background so she looks forward to how he will help facilitate operations.

She also owns Honeyside Farms, a 15-acre organic farm that sells vegetables to local restaurants and inside a weekly Community Supported Agriculture (CSA) subscription box. “It’s a fun small part of the business that I’m pretty passionate about. It gives us a way to give back because we end up donating a good bit of food and I help out with my kid’s school garden at their elementary school.” Bailey and her husband Tyson have three children, TJ (9), Tilly (7) and Tula (5).