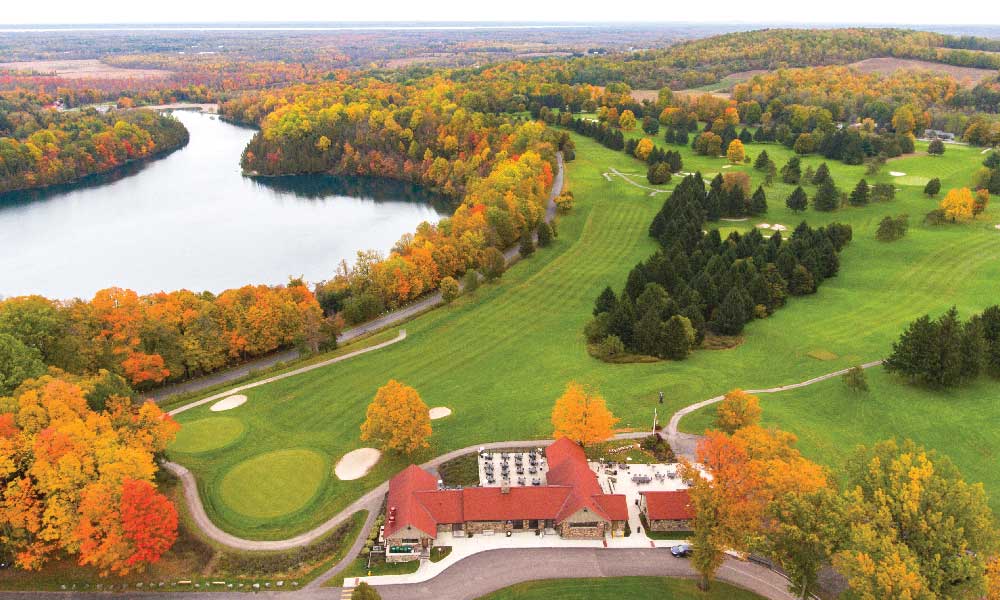 If by chance you had peeked your head into the maintenance shed of Green Lakes State Park Golf Course last fall, a strange sight may have befallen your eyes. Dozens upon dozens of boxes of Cracker Jack – that iconic, delicious, peanuty-popcorn snack – were strewn around the shop haphazardly.

“Why” you ask? Your Author, in a previous article, described Kevin Carroll, the newly arrived head of golf course maintenance, as “a crackerjack young rising star of a golf course superintendent.”

As we say in our industry, “the press left a label.”

Carroll smiles about it, and he has good reason to: They tease you because they love you, and it’s not just the State Parks crew, but the entire golfing region that’s singing Carroll and his team’s praises. Recently arrived from legendary Bethpage Black, Carroll, with the help of his crew, has Green Lakes firing on all cylinders, even in the teeth of the Coronavirus outbreak. Locals proudly boast that conditions haven’t been this impeccable in decades, and the tee sheet is filled to the brim.

Moreover, if you can’t laugh at yourself, you can’t laugh at anyone else, and it’s that wonderful unbuttoned feel, that earthy friendliness and casual ease that has defined Green Lakes for the almost ninety years it’s been open. It’s an everyman kind of place: the unquenchable spirit of the American golfer on full display every gorgeous summery afternoon. Sure, there are fancier “daily fee” and casino courses in the area, but high on its hilltop, with captivating views all across the iridescent emerald hue of the lake’s majestic stretch, and with conditions equaling those of private clubs and resorts, Green Lakes punches far above its weight at a fraction of the cost.

Carroll, who began his career as an intern on the Bethpage Black grounds crew, was a critical addition to the team, bringing a wealth of major championship and PGA Tour experience to what Syracuse-area golfers revere as their own Baby Bethpage. He also brings a first-class, blue-collar work ethic to the way he and the crew maintain the golf course.

“Kevin Carroll was on the crew that prepared Bethpage Black for the 2009 U.S. Open and the 2012 and 2016 Barclays FedEx Cup Playoff events,” recalled golf course architect Rees Jones, whose restoration of the Black catapulted it to major championship glory and gave public golfers everywhere a U.S. Open/PGA Championship venue they could play. “His going to Green Lakes is especially nice because it’s yet another connection between the two golf courses. Both golf courses are public access, both are run by the state of New York, and both were built as part of workers progress programs during the Great Depression.”

In Green Lakes’ case it was called the C.C.C., the Civilian Conservation Corps, upstate New York’s version of the Works Progress Administration program that constructed Bethpage Black, but the similarities don’t stop there. Both facilities survived the tumult of the Great Depression and the intervening decades with their golf holes more-or-less intact, notable because both golf courses are seminal mile markers in the respective careers of their designers. The Black was a magnum opus of architect A.W. Tillinghast, a crown jewel in his diadem and an important golf course to study to learn Tilly’s design concepts.

Likewise, Green Lakes is one of the oldest designs of Robert Trent Jones, another giant of golf course architecture. Jones’s design strategies changed dramatically as his career progressed: As televised golf and tournament golf advanced hand-in-hand during the late 1940s and early ‘50s, Jones’s courses became much more penal. Green Lakes, one of Jones’s first designs, is a kinder, gentler Jones, one not so much concerned with challenging professional players, but delighting ordinary golfers. Green Lakes may never host a major, but Syracusans are just as fiercely loyal to their hometown favorite as New Yorkers are to Bethpage, and they protect and preserve the heritage of Green Lakes just as loyally as New Yorkers do the Black. Also like Bethpage, people still camp out in their cars overnight for a tee time.

Now Carroll stewards Syracuse’s Baby Bethpage just as meticulously and successfully as he did the Black, just on a smaller scale. The hiring of Carroll makes perfect sense: he worked in the state park system before, and he worked at a municipal facility before: Hand, meet glove. Better still, working tour events and majors taught Carroll how to maximize a golf course’s playability even under the most hostile conditions and a crucible of worldwide media scrutiny. The hardest change in coming north might be a smaller budget, but Carroll believes a great golf course superintendent maximizes what he has, not pines for what he thinks he’d like to have.

“At the Black, you had all the manpower and resources you could wish for. But we have all the money and people here that we need, and that’s a credit to our sustainability,” Carroll stated gratefully. “Our focus is primarily on the greens; we cut and roll every day. We did that at Bethpage, and we do it here. For fertilization, we try to have a minimalist outlook, but still give the turf what it needs: good topdressing, grooming, and aeration. And with our new Toro Triflex mowers, their latest and greatest, the quality of the cut is equivalent to that of hand mowers on the greens with just a quarter of the labor.”

The result is silky-smooth greens that bring all Jones’s fascinating undulations to life. It also means happy golfers who beam about how conditions are top-notch in the region. The fairways, equally curvaceous and heaving, are kept just as fast and firm, an astounding accomplishment given the challenges of Coronavirus. But Green Lakes didn’t just survive, it thrived.

“We nailed it from out of the gate. Compliance was easy. We got great direction from our regional director of the state park system. He kept us informed and gave us instructions as to how and when to proceed,” Carroll explained. “We staggered out start times as well as employee times to maintain distancing, we disinfected, and – most importantly – everybody was on board, the golfers included. And it’s golf…it’s easy to socially distance!”

Green Lakes stayed closed until May 15, horribly disappointing because Syracuse – known for some of the most brutal and long winters – saw so little snow that the golf course could have opened April 1. So ironic…still, spirits are so high at the course, you’d never known there was a crisis. With the right kind of eyes, a 2020 summer afternoon looks much the same as it back in the mid-20th century, with one exception: the bunkers.

“The bunkers aren’t what they used to be. They once were detailed and intricate, with a lot of fingers. We’re doing our own in house renovation project, but now that’s temporarily halted due to a spending freeze,” Carroll confided. As we go to press, work has been completed on nine holes.

The project was necessary. If Green Lakes had a shortcoming, many of the bunkers had become so filled with sand or their faces so eroded, you could play out of them with a putter, an untenable situation for any serious golf course. The situation came to a head recently when Your Author holed out a 100-foot shot out of the back right bunker of the par-3 fourth hole with a putter. It also broke 40 feet if it broke an inch.

That green is set in one of Jones’s trademark crossovers, where three tees and three greens all meet. Close to ten groups witnessed the shot or at least the after-celebration, so loud and reverberating Your Author took two bows, a curtain call, and will be dining out that story for a long time to come. “Jay’s Sandbox” has now become the working title for the back right bunker. The press left another label.

This has created quite the conundrum for the maintenance team: the staff wasn’t sure whether they were going to restore that bunker or remove it altogether. Your Author’s nifty bit of prestidigitation may have forced their hand, however. When you’ve cowed the greatest golfing professionals in the world into submission at a national championship, you can’t let a scrawny, hobbit-sized, 16-handicap go scoreboard on you, especially not by making a mockery out of your bunker with a putter: no sir! And no less personages than both of Robert Trent Jones’s sons agree.

“Green Lakes is a historic golf course, and one of my father’s favorites,” said Rees Jones. “And that shot is now part of the course’s history.”

[Author’s interjection: Yeah! There you go!]

“They should rehab that bunker,” Rees continued. “Besides, we should praise shots like that for their creativity. I think it’s fabulous; it’s a smart play. I saw Vinny Giles break the course record at the Breakers, and he did it by getting up and down out of a bunker with a putter. The more options you have around the greens, the better.”

“Get in there with a backhoe and dig it so deep, it could be renamed ‘Jay’s Grave,’ he snarled menacingly, and that is the best idea. Deepen the bunker: Your chances of revenge just went from zero to even money.

I think Rees might actually have understated the case. Green Lakes is the past, present, and future of the golf industry. Yes, golf has Covid-19 protections built in. And yes, the reasonable price point has allowed Green Lakes to earn generations of loyal golfers. (It opened at a price point of $1 greens fees on weekdays and $2 on weekends.) But Rees and Bobby’s dad loved Green Lakes most of all for its homespun feel, Golf Americana, and that’s what’s been the secret of its nine decades of success. That’s what Carroll and team have tapped into, and that’s why Green Lakes, right now, is the best it’s ever been.