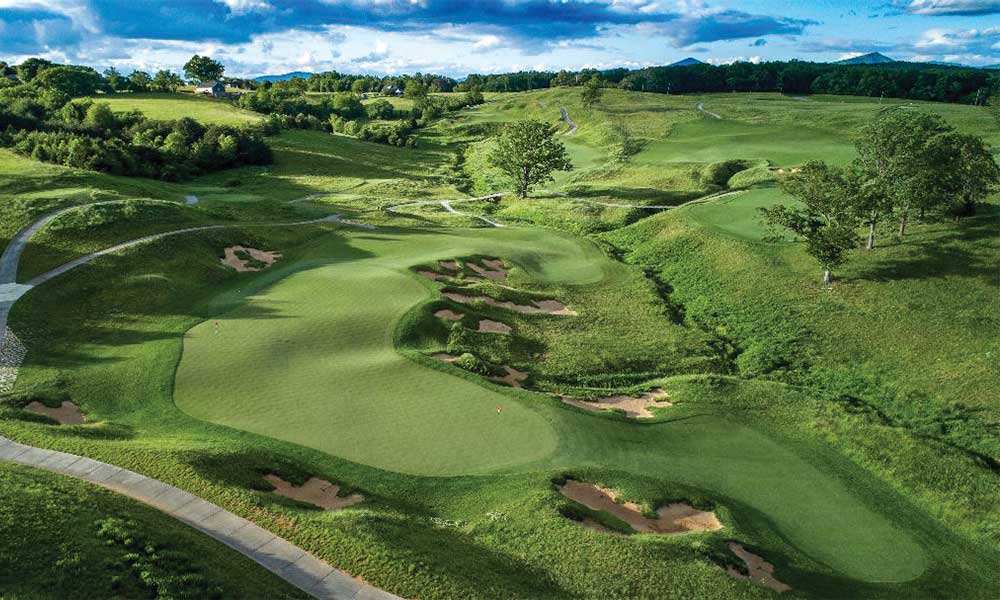 Here we go again, I thought. Wrong-Way Jay (my alter ego with no sense of direction, on or off the golf course) had zagged when he should have zigged and instead of arriving at the gates of Ballyhack Golf Club, I was trundling alongside oil tankers on a dry, dark, dusty road, under an ink-black sky.

Then again, any number of world-class golf courses have understated, even ironic entries. Unless one takes the ferry from Manhattan, the drive to Bayonne Golf Club in New Jersey takes you through oil tanks and Chinese takeaways. More than one fine Donald Ross country club is adjacent to a tacky mall. And of course, Pine Valley’s entryway is at the back of a parking lot of an abandoned amusement park.

But suddenly the urban outskirts had vanished, giving way to a rugged hillscape. And the low clouds that hung so oppressively began to shred, while the sky started to show a twinkling of stars.

I could, at last, see the outline of a lonely ridge, and turning into a lonely, gated road, I arrived at what could be described as a golf course meets dude ranch. Everything was on a massive scale, from the fire pit to the casitas to the hills and swales.

Ballyhack: a grand name for a mighty and majestic sweep of a golf course.

Lester George is the golf architect who brought Ballyhack to life, and if you’re wondering, “Is he the guy with two first names or two last names?” I’m afraid it’s both.

George (or is it Lester?) has had several man-sized hits in his golf design career, but he’s best known for his two Virginia masterpieces. The first was Kinloch, a cunning parkland-style layout with several split fairways, enormous greens, and ubiquitous water hazards. The brainchild of Vinny Giles – one of golf’s most distinguished and celebrated amateurs – Kinloch laid the groundwork for some of George’s ideas at Ballyhack.

“They are two of Lester’s crown jewels, and while superficially they look dissimilar, both courses feature many different playing options and ways to attack the holes,” explained Ballyhack PGA Head Professional Matt Bevan. “Mr. Giles had a great influence on Lester at Kinloch and may have asked Lester to soften some of his ideas somewhat. But here at Ballyhack Lester was able to push the envelope even further. The green complexes especially appear vast but are smaller than they undulating and more undulating, and with the conditions as good as Steven gets them here they are fast and firm.”

“Steven,” by the way is Steven Ball, Ballyhack’s Director of Agronomy and head superintendent. Steven’s been here for five years and was at Kinloch for three more before that, where he was described as a “rock star” for his scintillating playing conditions. He was a perfect fit to make the move to Ballyhack having stewarded Kinloch so admirably. And when Ballyhack plays as fast and firm as it’s intended, Steven may also be a smiling executioner sending you out to Lester’s great grassy guillotine.

“Ballyhack sits on a wild, heaving 375-acre plot of orchard grass and fescue, and right away I saw a highland links layout – a massive scale with wide fairways,” stated George. “Clearing a mere 40 acres and moving less than 250,000 yards of earth, we made it look like we moved millions when really, we didn’t top load one single truckload of earth. Much in the spirit of Sand Hills Golf Club, one of my influences along with Sutton Bay, we just went out and found the best holes.”

While fairways are wide off the tee, greens are treacherously guarded and fiendishly contoured. Better still (for links authenticity) the treeless landscape is ruthlessly swept by the fickle winds.

“Ballyhack is as difficult as it looks if not more for the average golfer. The secret to playing it well is to learn where you can and can’t miss and keep it below the holes,” Ball confided. “The greens have sections and quadrants, and each hole can play as much as a half a shot harder depending on hole locations. And even though it’s wide open, the severity of the wind can also dramatically affect scores.”

Getting off to as good a start as possible is also key, but easier said than done. In truth, Ballyhack’s first four holes rank among the hardest opening stretches in American golf. Triples are in play, from the false front at the par-4 first which can send balls scurrying sixty yards back down the fairway to the pot bunkers in the middle of the long par-5 second fairway, to the flummoxing Hog’s Back dividing the par4 fourth fairway that can send balls caroming into a watery grave in Saul Run.

“That’s such a difficult hole,” agreed Ball. “Even if you hit a really good drive, you have a downhill-sidehill lie to as difficult green as you’ll find out here. And you need it to be on the right section of the green just to have a relatively easy two-putt.”

The back nine is equally breathtaking, both in grand scale and Golden Age architecture. The centerpiece is the immense double green comprising both the par-3 13th and Par-5 15th. Unable to obtain a permit to change a wetlands area, Lester (or is it George?) surmised that it worked well as a hazard on its own, and the idea for the double green was born. He then looped holes 12-17 in a figure-8 with the double green as the crossroads.

“By crisscrossing those holes in a figure 8, the player faces many different wind directions in that span of holes. It makes the back nine really interesting, especially coming down the stretch in match play,” George explained in an earlier interview with Your Author. A thumbprint in the middle of the double green divides it into two smaller sections.

“That’s one of George’s design traits,” stated Bevan. “The greens appear large, but you have a much smaller target to get the ball close to the hole. And if you’re distance control or accuracy are even slightly off and you miss to the wrong side, the penalty can be severe.”

Bevan actually highlights not just one but two of the indisputable truths about Ballyhack. First, if you get out of position on this golf course, you are in deep trouble. Moreover, there are plenty of optical illusions and greenside contours that require approach shots to be properly planned and executed. You can’t just take dead aim at a flag because if you miss by even a few feet the wrong way, you could end up 70 yards away.

Yet this also underlines the other great indisputable truth about Ballyhack: it combines fun golf shots with things you’ll see at no other golf course in the country. Ballyhack has sweeping horizontal movement to the fairways, tumultuous vertical movement in the land with its wild undulations, and outstandingly contoured greens; those are the cornerstones of truly great golf design. George boldly and wisely routed the course to play right into the teeth of the most severe natural features, ensuring that the course would have a rugged, wild character. But that’s the beauty of playing a course designed in the links tradition. And Ballyhack is so authentic, you won’t even mind if Wrong Way Jay gets you lost again and you must stick around and play another round.

Why Skin Cancer Prevention Should be in a Crew’s Routine
The North Texas Golf Course Superintendents Association, Growing, and Serving
To Top