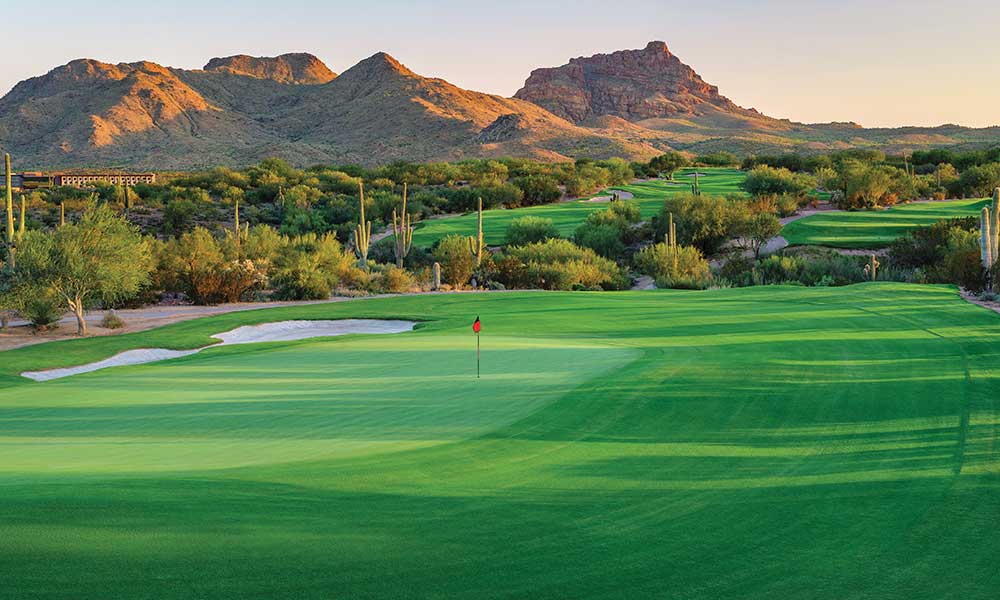 Last month we took a sojourn through some of Florida’s best public and private courses as a metaphoric break from a northeast winter’s chill. This month we’ll finish the two-part series with a look at another classic winter golf getaway: Arizona.

“Full many a flower is born to blush unseen And waste its sweetness on the desert air.” -An Elegy Written in a Country Churchyard, Thomas Gray

It’s beautiful, if sad sentiment, but golf proves it untrue, or at least provides an exception to Thomas Gray’s assessment. Few places on Planet Earth are so strikingly singular as either the stoic Saguaro cacti of the Sonoran Desert or the majestic, striated red rock canyons of the Sedona region. Indeed, many of Arizona’s courses play and feel like you’re in a fantasy golf calendar brought to life, and Arizona golf provides countless opportunities to experience all the variegated flora and diverse fauna of the American southwest.

Generally speaking, Arizona golf courses frequently are also at the vanguard of water conservation. As the Colorado River frequently runs lower than hoped for, many of the state’s best courses feature limited to turf, sometimes as little as 75 acres for 18 holes. Nevertheless, a treeless expanse also provides more airspace to play the game, though the desert can be unforgiving when it comes to unforgiving lies. Like everything in golf, there are interesting trade-offs. Best of all, each of the courses on our itinerary this month is public. So you can go out and play them right now.

THE LODGE AT VENTANA CANYON

Skyrocketing to the top of magazine rankings when they opened in the 1980s, the Lodge at Ventana Canyon’s twin courses – the Mountain and the Canyon – are still, perhaps, Tom Fazio’s best 36-hole facility anywhere. Set at a higher elevation, the Mountain Course winds around the edge of the Santa Catalina Mountains making use of both the striking elevation change and undulating greens. The best run on either course comes early – two, three, and four, a par-4-3-5 sequence that immerses the player amongst the cacti, the rocky foothills, and the myriad dry washes that pepper the terrain. Where the second green appears to float amid a sea of cacti, the third green is almost completely encircled by a chasm of stone. The effects of natural radiation are reduced by a cunning underground system of pipes beneath the green that keeps it at a constant temperature, warming it on cold nights and cooling it in the blast furnace heat of the day.

It can exceed 110 degrees in high summer in Arizona, for those of you scoring at home.

Generally wider and less penal, the Canyon course showcases views of the Esperro Canyon and a larger portion of the 600-acre preserve that encompasses the resort, and it’s not uncommon to see deer, coyote, quail, red-tailed hawks, bobcats, rabbits, and roadrunners on the course, especially as the shadows lengthen. There are some brobdingnagian golf cart rides between holes, but with 1,100-year-old cacti and fragrant mesquite lining the cart paths, it’s totally worth it.

Scottsdale is not just a golf Mecca – over 200 courses as of this writing, many of them the centerpiece of some of the finest luxury resorts in the world – it is also centrally located for quick trips to Tucson, Sedona, or both.

Golf design aficionados prefer We-ko-pa as its two courses – the Cholla by Scott Miller and the Saguaro by the tandem of Bill Coore and Ben Crenshaw – pose the most interesting strategic questions.

The Cholla course features diagonal hazards over the ubiquitous dry washes that meander across the property as well as panoramic vistas of the McDowell Mountains, Red Mountain, the Verde River, and the often snow-capped Four Peaks of the Mazatlan mountains.

“Best of all, the lack of surrounding land uses allow[s] this venue to be a perpetual native Sonoran Desert retreat,” wrote Miller.

True to their minimalist roots, Coore and Crenshaw not only moved a few thousand cubic yards of earth to build the Saguaro course but by designing greens and tees near each other, the course is eminently walkable. Again, the diagonal hazards and curvaceous greens provide the sterling defense with a premium on planning and executing the golf shot – utilizing either the aerial approach or the contours of the natural terrain to fed the ball to the hole location.

Just over the ridge as the crow flies, the pair of courses at Troon North Golf Club has been the gold standard in Scottsdale since opening in the 1990s. Tom Weiskopf returned in 2007 to reroute and renovate both the Monument Course and Pinnacle Course, including reseeding all the greens with A4, then the state of the art in the industry and still a dominant turfgrass strain to this day.

“Two of Tom Weiskopf’s hallmarks of golf design are the short drivable par-4 and the thrilling long downhill par-3,” stated PGA Head Professional Mike Friend. “We have great examples of both here.”

The 15th and 16th holes at the Monument course provide both back-to-backs. The 306-yard par-4 15th also features a picture window view behind the green to the broad expanse of the valley beyond. And the following 16th plays directly towards the valley floor below as a backdrop.

Finally, the Boulders Golf Resort in nearby Carefree offers the North and South Courses, both winding around the five million-year-old Monzonite boulder formations scattered across the landscape. It’s a splurge, but an unforgettable one; you’ll remember vacationing at the Boulders your entire life: sun-drenched days fade to the lazy haze of the Milky Way and an endless sea of stars in the evening.

Two hours north of Scottsdale, Sedona Golf Resort is set in one of the most captivating regions of the Southwest. The thrilling 6,646-yard, par – 71 course is widely considered among the world’s most unforgettable golf experiences, winding around the famed red rocks of the valley, including Snoopy Rock and Coffee pot rock.

In the sizzling summer heat of Phoenix and Tucson, Sedona‘s elevation – anywhere between 4,000-4,350 feet – can be up to 15 degrees cooler. Sedona is also at the perfect elevation to keep the snow away except for a few days a year, meaning almost year-round golf.