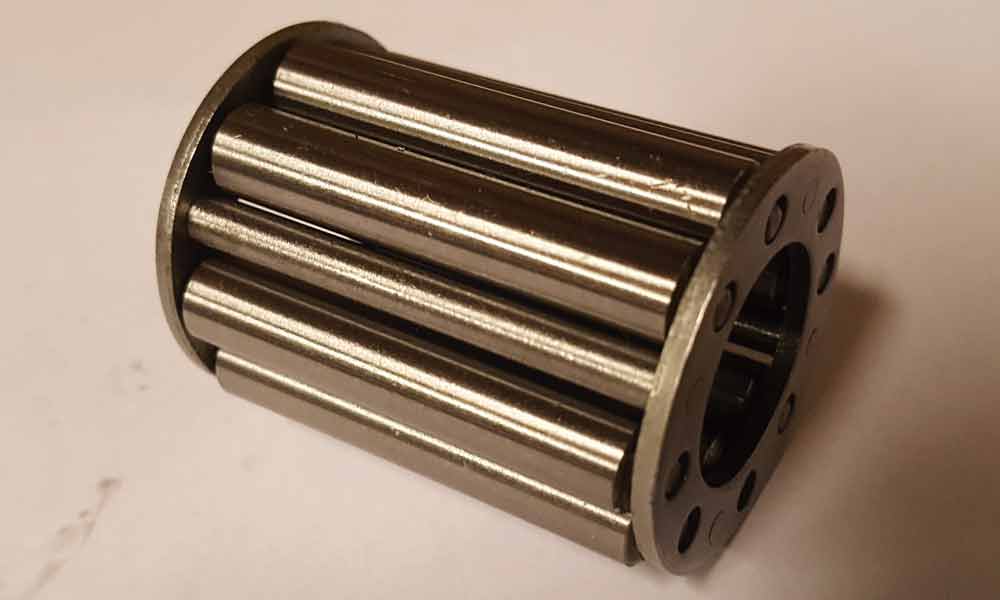 The Mechanical Aspect of Golf Column is always open to new ideas and input. The subject of bearings this month is from one our readers, Dave from Mahoning Country Club in Girard, Ohio. Bearings fit right in with the last two columns in which I touched on reel grinding and cutting units. In just one cutting unit there can be multiple types and styles of bearings used.

A simple definition of a bearing is a device that makes possible rotational and linear movement. There is a long history backing up this definition and the bearings in our equipment. One of the earliest known examples of a ball-shaped bearing made of wood came from the remains of a Roman ship dating back to 40 BC. As time passed the material used to make bearings changed. In 1794 a patent was awarded for the first modern ball-bearing design. Radial ball bearing came along around 1869 and was first used in bicycles. What we know now as a Timken tapered roller bearing was patented in 1898.

When bearings that are maintained and lubricated properly, they are the unseen workhorses of rotating and moving parts. A neglected bearing quickly gets our attention as it begins to produce unwanted squealing or grinding sounds. At this point, it’s too late and the bearing has begun to fail and will be in need of replacement. So you ask yourself, “What kind of bearing do I need?” 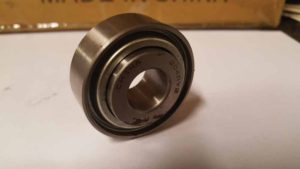 Described are three of the six basic bearing types used in all various types of mechanical equipment from a fine mechanical movement of a watch too large earth moving equipment and more.

Fluid Bearings are used in precision high rpm applications and support their load with fluid or gas under pressure. The bearings are made up of a Babbitt material. A Babbitt bearing consists of a steel shell coated with a layer of copper and a finished with a thin layer of Babbitt. The Babbitt is the bearing surface which is an alloy made from a mixture of tin and lead. One application of a fluid bearing is found in gasoline and diesel engines to support the crankshaft and camshaft. The bearings receive a constant supply of oil and pressure for lubrication and cooling while the engine is running. The operating clearance in a fluid bearing is few thousandths of an inch. This tight tolerance helps to maintain oil pressure. As the bearings wear and clearance increase so does the oil pressure in the engine.

Plain bearings are generally the simplest form and consist of a bearing surface with no moving parts. They can carry light to heavy loads from slow to high speeds. Plus they are relatively inexpensive. The bearing materials that are used range from a plastic called Polytetrafluoroethylene or PTFE. Other materials are soft metals or sintered steel. One application of the plain bearing is a rotating shaft through a hole. An example of this is a mower lift arm at p the point where it rotates on is mounting pin.

Rolling Element Bearings consist of either rollers or balls rotating between inner and outer rings most commonly known as a race. These parts are made of steel in which the surfaces are hardened to reduce friction and wear. Rolling Element bearings are the most common type used in turf equipment. Rolling Element Bearings are made in various configuration and styles. Two of the most common styles are ball bearings and tapered roller bearings. A ball bearing is designed to handle both side thrust and radial or rotational loads. The ball bearing is an assembly made up of a hardened inner and outer race with machined ball bearings rotating between the two parts. Depending on the application the ball bearings may be sealed with a metal shield or rubber seal. When no seals are present this is called an open bearing. The open bearing is protected with seals installed separately from their assembly. A ball bearing is limited on how heavy of a load it can carry. 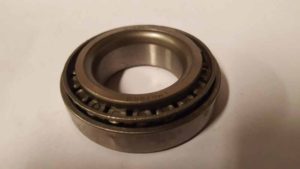 Tapered roller bearings bearing are a two piece assembly consisting of inner hardened race or cone wrapped in a cage holding tapered rollers and an outer hardened race. This assembles when used in pairs can handle heavier thrust and radial loads than a ball bearing. Tapered bearings in most applications do not have seals attached to it. Seals for this style of bearing are mounted separately from the bearing in the same housing that is packed with lubricating grease.

Another style you will encounter, are caged needle bearings. As the name implies these are a longer thin roller bearing installed in hardened outer shell or race. The needles roll on the hardened shaft that they support without an inner race. These precision bearings are widely used to support high-speed spinning shafts of hydraulic motors and pumps.
Heavy duty caged roller bearings are used in conjunction with plain thrust bearings in castor wheels. The two parts used together can handle the side and radial load of a castor wheel rolling on the turf.

From just one manufacturer alone I counted seventy-six variations of just rolling element bearings. Plus these seventy-six bearings come in wide range of sizes measured in both fractional and metric dimensions. As you become more familiar with these different types and styles you will be able to break the bearing language barrier.

Come back next month for part two. I will go into more detail of identification, measurement and the servicing of bearings.

Bactifeed: A Craft Brew For The Ages
Bio Huma Netics, Inc.
To Top