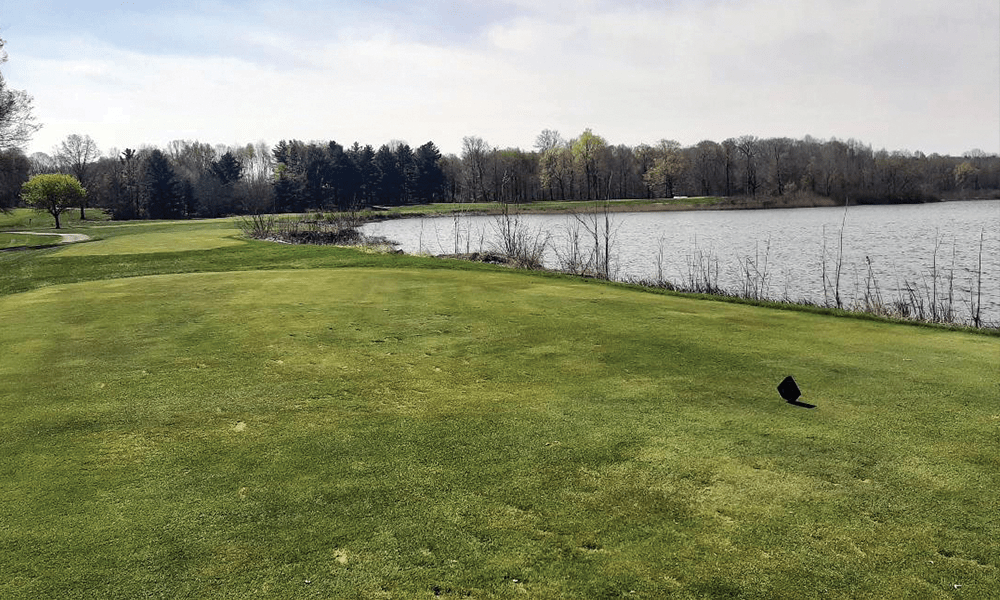 I call it the “I-90 Effect:” when a blizzard materializes out of nowhere, creating white-out conditions anywhere between Cleveland and Boston. Today – April 22, 2021 – it was Rochester. Out of nowhere, the sky to the west turned slate grey across the horizon, an anvil-shaped cloud formed, and a sudden wind lashed broad snowflakes across my windshield. Before you could say “double bogey” the yellow road stripes vanished in a blur of white, and the only color in the snow globe was the tail lights of the car in front of you.

Are you kidding me? It’s been 65 and sunny for the last five weeks! Where was this when we were trying to ski in mid-March?

And then it was gone, vanished like a Cheshire cat. The snow melts – yet again – in the instant, infuriating skiers, who have been cooling their heels indoors and yelling curse words at the sunshine.

Still, skiing’s loss is golf’s gain and is a once-in-a-generation occurrence, I-90 golfers have been playing since mid-March. Better still, conditions are stellar, especially for such an early start to the season. Again golf is leading the Covid comeback, even in the normally still-frozen northeast. Let’s take a spin across I-90 and visit some of the public facilities at the vanguard of the Coronavirus recovery. Happily, business is booming.

Ohio is best known for its opulent U.S. Open venues and PGA Tour sites, both past and present, all of which are particularly exclusive. Inverness, Moraine, Scioto, Muirfield Village, Firestone, Canterbury: Ohio has as rich and storied a collection of iconic American country clubs as nearly any state in the union.

Public courses, on the other hand, are not Ohio’s longest suit, with one notable exception – Fowler’s Mill, about 30 minutes east of Cleveland.

Fowler’s is most notable as one of golf architect Pete Dye’s earliest designs. Opened in 1970, Fowler’s is primordial Dye and showcases his decision to break away from the “Doctrine of Framing, Doctrine of Symmetry” designs and Penal Architecture schools that had come into vogue during that period.

“Robert Trent Jones, Sr. was the biggest name in golf design at the time, and I decided that if I was going to carve out a niche in the industry, I had to go in completely the opposite direction,” Dye confided to Your Author in an earlier interview.

Pete also admitted (somewhat sheepishly) that when he was younger he used to reward the long drive more than he did later in his career. Fowler’s is a perfect example – it’s a long golf course. The regulation tees are 6650 yards, and nearly every approach is uphill. Dye enthusiasts will especially like one of his earliest versions of a Cape Hole – one of his favorite Seth Raynor templates – at the par-4 fourth.

We found the course in brilliant condition for any season, let alone mid-April. The greens especially rolled perfectly true, and have subtle, but cunning internal; contours. The property is rugged and rolling carved out of a forest of hardwoods. The iconic ninth hole was always one of Dye’s early favorites; a creek bisects the hole longitudinally, prompting one puckish employee of the course to quip, “Some people just aim for the creek and hope to miss on either side.” Or you could play the hole as I did – avoid the creek with a goofy slice into the rough, hit a worm-burner up the middle of the fairway, wedge to 35 feet, and sink the putt for a zany four.

How they will ever hold a PGA Championship in Rochester, New York in mid-May without heated seats and zambonis is beyond me, but they’re trying it. If it happens that the winter of 2023 ends as early as this year (or last year) the PGA of America will be dancing a jig, because too often they have to dodge ice storms on Mother’s Day on I-90.

Ravenwood Golf Club in Victor made a big splash in the magazines when it opened in 2003, and rightfully so. It was the first American northeast design by Robin Nelson, who prior to Ravenwood had worked almost exclusively abroad or in Hawaii.

Nelson’s ideas are impressive: we see bunkers cutting into the line of play, fascinating angles off the tee, and myriad greenside defenses testing both accuracy and distance control. Head superintendent Peter George has done a stellar job of keeping trees from encroaching on the fairway, and conditioning is pristine, especially on the greens which started as L93, but are now a 50-50 blend of poa and bent. Best of all, Nelson only moved about 400,000 cubic yards of earth to build and shape the entire property.

“It also helps that we don’t have a lot of trees. We don’t have huge snowbanks, and the snowpack melts off quicker than on courses with more trees. Finally, we have cart paths 1-18, so we can utilize them as soon as we open the course, so that’s a draw as well.”

The early spring meant the course opened on March 20, previously unheard of along I-90. Sadly Nelson died in 2012 of ALS. Like Mike Strantz, we lost a great light too early. Even so, Nelson is definitely smiling in Heaven as Ravenwood is still as interesting, fun, and accessible as it was when he finished designing it in 2003

Similarly, there’s an electric buzz at the Roc and Pheasant, the Furfari family’s 27-hole facility in nearby Shortsville. The new nine, called the Roc, has grown in beautifully. It’s long and challenging with excellent green complexes. There’s a stud farm with horses and donkeys for rides, and not one but two different concert venues, including a new grassy amphitheater that seats 300 for movies or concerts. The course played fast and dry, miraculous for how early in the season it was.

Radisson Greens in Syracuse holds the distinction of being, perhaps, the last course in the Syracuse region last year to close, as well as, perhaps, the first course to open this year. We played it in late November and again in mid-March and conditions were still impressive, particularly on the greens.

“Mother Nature had a lot to do with it. We didn’t have a lot of snow, and so our great crew we went right out there and attacked it,” beamed an ebullient Deneen Zielger, head superintendent at Radisson. “We got right to rolling, mowing, and verticutting our Pencross greens, and the weather has cooperated so far too. This is a Robert Trent Jones, Sr. course, one of his most beloved in the area, and so we really want to go the extra mile to honor that.”

Unlike most of Jones, Sr.’s work in the area, Radisson Greens came much later in his career – 1976 – when many of his penal architecture ideas had become mainstream and were in vogue, (through television, but that’s an article for another day…). Radisson clearly features some of Jones’s most iconic features – bracket bunkering, runway tees, and elevated greens. There are also some long carries over water, most notable the par-5 third and the par-3 15th.

That being said, Jones was careful not to make Radisson too penal. Fairways are wide and welcoming. There are a few more strategic angles off the tee than at other, more penal Jones, Sr. designs, such as Firestone’s South Course or his renovation work at Oakland Hills. A pleasant nature walk in the woods with your clubs, Radisson (indeed all the courses in this article) – is particularly reasonably priced.

One of the two flagship public facilities in the Boston area, Granite Links, a Jack Nicklaus signature design spearheaded by golf architect and Nicklaus design associate John Sanford, has seen an early and successful start to the season as well.

“I visited there last season as I was finishing work at Duxbury Yacht Club, and they were just killing it. After the lockdown ended, they had full tee sheets all summer and fall,” Sanford said.

The A4 bent greens roll perfectly smoothly, and the fairways run fast and firm, almost Tour-like conditioning. Head super Brad McDonald is one of the best in the business. A former landfill, Sanford designed three nine-hole loops with different personalities: one quarry, one hilltop, one marshland.

“Overlooking Boston, it’s a stunning and gorgeous site. And Brad and his team do a great job of maintaining the mowing lines and the green sizes. Brad keeps all the strategies we designed by paying careful attention to those, and the results look and play perfectly.”

Granite Links also boasts one of the hottest bar scenes in golf. The clifftop bar overlooks both the course and downtown Boston. Range balls, Bloody Marys, and oysters all within easy reach, because it’s immediately adjacent to the practice areas, complete with spectacular 270-degree views from 300 feet above the skyline.