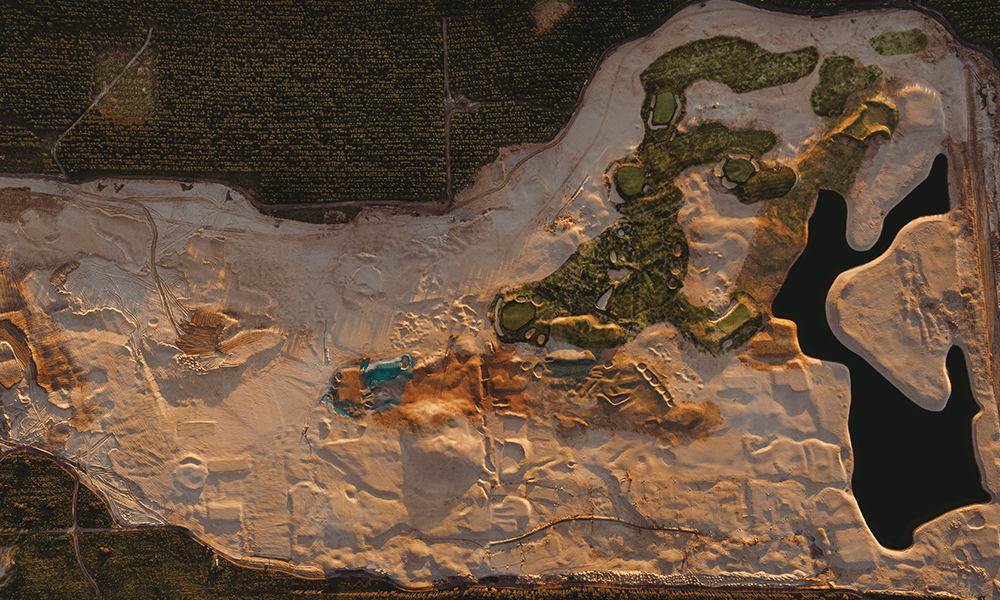 With a collective cheer that might have been heard in space, the golf world celebrated the promised return – indeed rebirth – of a long-lost classic. Charles Blair Macdonald’s Long Island masterpiece, The Lido Golf Club, for over seventy years nothing more than a legend from the mists of history, is being faithfully rebuilt in the sandy wastes of rural Wisconsin by the team of developer Mike Kaiser and golf architect Tom Doak.

You’ll recall Kaiser developed both the Bandon Dunes Resort (where Doak built two courses…three if you count the original Sheep Ranch…) and Cabot Links. Now he’s raising the stakes by recreating Lido as a private course attached to his Sand Valley Resort.

Some of you reading this may be saying to yourself, “What is he talking about? Lido is a Robert Trent Jones, Sr.-designed public course, and it’s open; you can go play it right now….” Close: That’s a different Lido, though not far away from where the original Macdonald design was located. The original, tucked between Reynolds Channel and the Atlantic Ocean, with its whimsically-shaped fairways, geometric bunkers, and oceanic greens with Brobdingnagian contours, was founded in 1914 but closed in 1940, the land sold to the Navy in support of the war effort.

At the time, Lido was called the “greatest golf course in the world,” by no less a personage than Bernard Darwin himself, one of the four golf writers whose faces grace our craft’s metaphoric Mt. Rushmore. (The others being Grantland Rice, Herbert Warren Wind, and Dan Jenkins.) It’s one of the most famous, fabled, and lamented golf courses on the No Longer Exists list. It also inspired any number of holes on countless golf courses throughout the intermittent decades, more so now in this second Golden Age of Golf Course Architecture, a movement that has brought Macdonald and his architectural scions, Seth Raynor and Charles “Steamshovel” Banks to the brightest illumination. Ingeniously routed over a 113-acre site in tidal marshland, it was played by giants of commerce with hickory-shafted clubs and ancient rubber-cored balls, the move from gutta-percha having occurred just a few years earlier. Now the Kaisers, perhaps the greatest golf developers of all time, are once again bringing back what is regarded by the intelligentsia as, perhaps, the greatest golf course lost to history.

They are literally firing up a golf design time machine.

“What the Kaisers have already done in the middle of nowhere in a depressed Wisconsin county is nothing short of remarkable: they’ve created so many jobs with their two Sand Valley resort courses and the par-3 course as well,” began Gary D’Amato, the iconic Wisconsin sportswriter. “But when it gets done, Lido will be the most talked-about course in America. They are faithfully recreating it. Not down to the inch – there’s no record of the green dimensions. But Peter Flory, the world’s leading authority on the Lido, did 3-D renderings based on the immeasurable historical information he’s gathered over many decades. And he gave everything to the Kaisers and Doak.”

That’s right: This project is not some pastiche with holes “inspired by” Macdonald’s work. The Kaisers – father and son and team – promised that every tee, every green, every fairway, every bunker, and every angle will be laid out exactly as they existed on Long Island at the original. And Doak himself promised the same in a press release.

“I’ve been adamant that no project should be called The Lido unless it’s a faithful re-creation of the original course,” Doak wrote.

He’ll get his wish, along with a chance to walk the walk in the biggest way. Macdonald’s Lido was such an extraordinary golf course that the pressure is on to faithfully deliver…but Kaiser and Doak have the team that can deliver. Back in the day, Seth Raynor built Macdonald’s design with 2,000,000 cubic yards of sand dredged from the channel in what was, for its time, an incredible feat of engineering. (Pete Dye accomplished something similar in 1980 when he built the Stadium course at TPC Sawgrass.)

By contrast, Doak and his team have an 850-acre parcel of virgin prehistoric sand in Central Wisconsin. Remember, the entire breadbasket of the United States was, 10,000 years ago, the bottom of an ocean. The mammoth sand dunes stretch all the way to Nebraska and Colorado. That’s a magnificent canvas on which to work.

Moreover, 21st-century technology is a space age’s quantum leap beyond the gaslight/early electricity era of a century and a quarter ago. With 6 holes grassed already (as we go to press) and 10-12 expected to be complete by the turn of the year, Lido looks to beat their expected opening date of 2023, with the entire course grassed by next August.

Not only are many of Macdonald’ trademark “template holes” featured over the course of the round – iconic holes such as “Alps,” “Punch Bowl,” “Cape,” and “Redan,” – Lido will also showcase two holes completely unique to the Macdonald lexicon: the Channel hole at the short par-5 fourth and the Alister Mackenzie-designed 18th.

“Those are the two legendary holes that people think of the most when talking about the Lido,” explained Mike Kaiser, Jr. “At the fourth, you had to play a shot over the channel twice. In fact, Macdonald called it the greatest 500-yard hole in the world. And the 18th was actually designed by Alister Mackenzie, with its three separate fairways.” Mackenzie actually drew the hole for a magazine contest and won. Macdonald liked it so much that he built it at the Lido. But Kaiser, Jr. had a different choice for the hole he’s most excited about.

“My favorite right now is the second hole, [called Plateau] because it reminds me so much of St. Andrews,” Kaiser, Jr. stated energetically. “It shares a fairway with two other holes – the 11th and 17th, it’s spotted with bunkers, and it has an enormous green that sits beside the equally enormous 11th, so it’s almost a double green. Over 30,000 square feet of putting surface at those two side by side greens.”

The new Lido will play to a par of 37-35 = 72, 6,582 yards from the back tees. The club will be semi-private – membership will be both local and national, but it will also be accessible to resort guests on certain days. And of course, minimalism in maintenance will be the highest priority.

Golf Course Trades will be in Wisconsin later this year for more on Lido and the Sand Valley Resort. Other venerable Golden Age courses lost to history include Flushing, New York’s Fresh Meadow, (site of the 1930 PGA Championship and the 1932 U.S. Open), Timber Point, a Harry Colt, and Charles Alison design formerly on the south shore of Long Island, and El Caballero formerly in Tarzana, California, a Billy Bell design set in the canyons of the Santa Monica Mountains.

Golf Course Superintendents: Embracing Change and Growing the Game
How to Buy the Best Golf Course Equipment
To Top