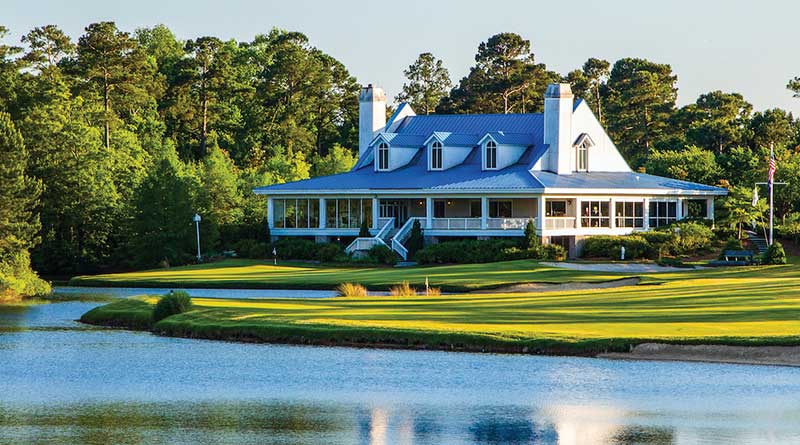 After tours through Florida and Arizona in our last two issues, we’ll make one last golf excursion to warmer climes before returning to the steeps and moguls of Whiteface, Cannon, and Sugarbush. (Or is it Waterville Valley, Jay Peak, and Sun Valley? I never can remember….) This month let’s explore, perhaps, the most popular expedition of all – the buddy or couples’ trip to Myrtle Beach.

Myrtle Beach is a kaleidoscopic whirligig of non-stop sensory bombardment: a surfeit of golf, all-you-can-eat buffets, and parties. There are over 100 golf courses in South Carolina’s Grand Strand alone.

Nevertheless, since their twin openings in 1994 and 1998 respectively, Caledonia Golf and Fish Club and True Blue Golf Club have continuously held the top spots in the Myrtle Beach golf scene, fending off all comers for close to 30 years. Designed by the late, great Mike Strantz – “the Maverick” as he came to be known both because of his bushy mustache and visually compelling design style – the two courses sit side-by-side on the southern tip of the Strand but look and play nothing like one another.

Caledonia was Strantz’s first design upon leaving Tom Fazio’s design company and setting out on his own. Shortly afterward, Strantz teamed up with design associate Forrest Fezler. Yes, that Forrest Fezler: another bushy mustache and puckish personality, a perfect match for Strantz! Many golf fans remember Fezler’s gallant run at the 1974 Massacre at Winged Foot before Hale Irwin finally triumphed. Even more, fans remember Fezler for putting his thumb in the USGA’s eye by changing into shorts for the 72nd hole of the 1983 U.S. Open at Oakmont, proving once and for all that polite society can tolerate the sight of tan, athletic calves.

Kindred spirits in so many ways, together Strantz and Fezler soared to majestic heights as a design team. Frequently, they would be hired to design in the shadow of a historically important American golf masterpiece and produce a design of equal or better strategic brilliance and natural beauty. Tobacco Road is Strantz’s first indisputable masterstroke, Monterey Peninsula Country Club’s Shore Course is his magnum opus, but it was Caledonia Golf and Fish Club that announced his presence with a thunderclap. Instantly it ascended to the top of the Myrtle Beach rankings as consensus number one with a bullet, a position it has never relinquished to this day. If Caledonia isn’t the first course listed on your Myrtle Beach wish list, you’re not planning the trip right.

Shortly after opening in 1998, True Blue joined Caledonia atop both the Myrtle Beach rankings and many golfers’ “Must Play” lists.

“Strantz used to say wider is better, so he tended to allow golfers more airspace to play the game: a little more room for error, and a little less penalizing on a shot that’s a bit offline,” explained True Blue PGA Head Professional Eltoria Renwick. “As his first design, it’s different than his later work: more traditional and tighter windows off the tee than at, say, True Blue. As his career progressed, Strantz became known for rewarding taking the aggressive line off the tee, but also for all the illusions and visuals he’d put in front of you. At True Blue, or anywhere else Mike designed, if you let him get in your head, you’re in for a long day.”

Strantz’s design features, though presented with a visually arresting artistic flair, are firmly rooted in the strategies of the great Golden age architects, particularly Alister Mackenzie and Charles Blair Macdonald.

“Strantz was big on Alister Mackenzie and you can see his influence on a number of holes, particularly in the scale of the green contours at True Blue. True Blue was a flat piece of property, but Mike’s earthmoving and angles make it seem an enormous scale,” noted True Blue head golf course superintendent Kevin Thompkins. “Caledonia is different in that he took a small, 100-acre piece of property, and with just 68 acres of total turf, he built one of the best courses in the region.”

Thompkins paused for a minute, chuckled, and then recalled another fond memory of his friend – for he and Strantz were close from the day they met until Mike’s passing in 2005 from oral cancer, they even played competitive golf together, qualifying for the John Deere World Championships at Pelican Hill.

“When he painted a line for something to be shaped, he could come back the next day and tell right away whether they had put it where he had painted it or not!” Thompkins recalled animatedly.

The look and feel of the two courses give golfers a perfect 1-2 punch: play a course that oozes classic parkland feel, then play a modern, “instant classic” with bold shaping and a majestic sweep.

“From the moment you drive in the entrance at Caledonia, you feel immersed in southern charm. Some folks say it’s like the entrance to Augusta National,” Thompkins noted, and he’s right. The conditioning especially is one of the highlights. Caledonia is one of the most perfectly conditioned golf courses Your Author has ever played, an astounding feat considering the amount of traffic the course sees – sometimes as much as 54,000-55,000 rounds a year.

“Their head superintendent, Jackson Clemens does a phenomenal job with conditioning and landscaping. He has a great program with water and fertilizer, and the results speak for themselves,” added Thompkins.

Every hole at Caledonia is both visually endearing and challenging strategically, but the closing six are a stylish, yet devilish finish. The short par-4, dog-leg 13th features a green and approach completely encircled by sand, a design template Strantz conceived straight out of Pine Valley, another favorite course of his. That theme recurs at the par-3 17th, with a Gobi-like waste bunker stretching from tee to green. And of course, the mighty 18th is a grand summation of all that came before. A broad expanse for the tee shot tapers to an all-carry approach over water the final green. Deck chairs line the clubhouse veranda, so you players sipping drinks can watch your all-or-nothing finish to the round.

“It’s beautiful but tough! You hit a big drive, then you hit it in the water,” quipped one laconic, snarky octogenarian golfer (my Dad), “but it may be the best course I’ve played in all the years I’ve taken a southern golf vacation.”

That’s high praise coming from a well-traveled man who played the game of golf for seven consecutive decades of his life, but it perfectly encapsulates the nearly universal appeal and acclaim of Caledonia.

“There was a time when Strantz first went out on his own that he became known as sort of a ‘love or hate’ architect because of how bold his designs were and how they didn’t look like people’s expectations of golf courses,” explained Thompkins. “But in the last 10 years or so, since the world has become more interested in understanding golf course design, Mike’s courses have taken on this warm glow, and people have really grown to love his work.”

That’s critical because Mike Strantz’s contributions to golf are monumental, though few. They need to be preserved, protected, and promoted as his indelible contributions to the Pantheon of great American golf course architecture.