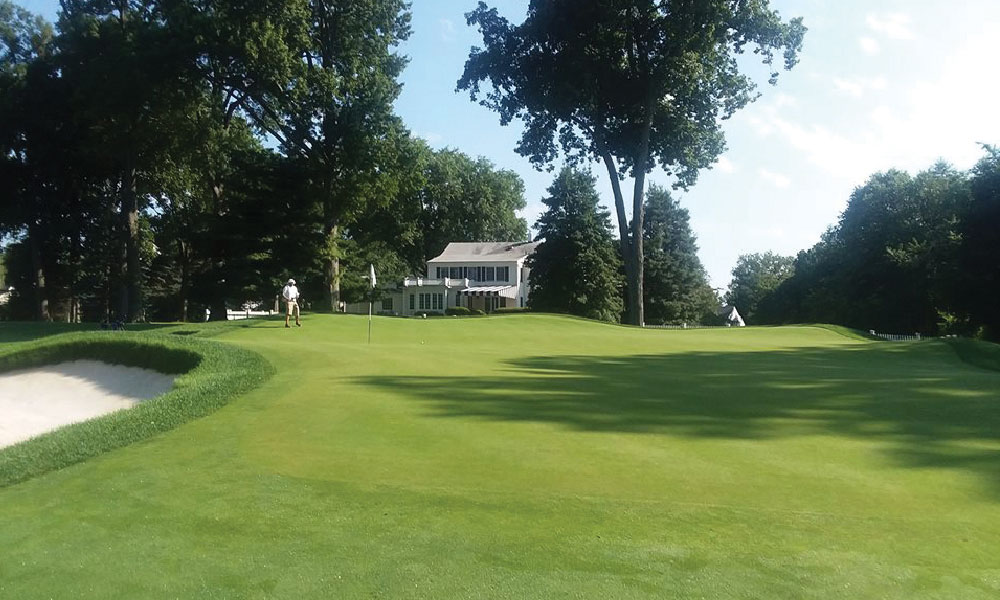 If you’ve ever wondered what it’s like to play a U.S. Open golf course under tournament conditions, I present my bruised ego for your consideration.

As a professional sports writer, I’ve covered just about 30 major golf championships and played over 500 American golf courses. One of those, quite happily, is Winged Foot, a club I visit not only when the U.S. Open comes around, but for the Anderson Memorial, the de facto national championship in fourball golf before the USGA premiered their USGA Fourball event. My yearly four-day trip to visit Tillinghast’s dual masterpieces, West course and East course, is like Christmas in June. Not just for the golf, but for the people – the friends you make there.

One of those friends called me up last summer…“Whaddya say you and I play the East Course tomorrow morning? Just us chillin’, a nice low impact round. 9:00 a.m. Sound good?” he asked.

So I went to bed peacefully. Tomorrow it’s just me and my buddy and the caddies. No scorecard, no spectators, no pressure. Just a laid-back, relaxing day on the beautifully restored East Course – ferocious still, as all of Winged Foot is – but just a little less relentless than the West Course, a smiling executioner instead of a scythe-wielding shadow of death.

What’s that saying about the best-laid plans of mice and Jay?

THROWN TO THE LIONS

Now Winged Foot is not Oakmont. Yet, when it comes to the members of the unofficial U.S. Open Rota, these two are the strongest pillars of America’s golf Pantheon. However, when major championships are over, they take on a much different path regarding member play. Oakmont stays U.S. Open ready. Mirror, mirror, on the wall…who’s the toughest course of all? Oakmont! And no one else, darn it! And that’s how they like it. It’s their imprimatur to be the hardest, at any time, for any reason.

At Winged Foot they are just as fervent about golf – it’s home to one of the strongest amateur contingents in the World, not just America – but they dial back member play set-up to “tough but fair.” As Director of Grounds Stephen Rabideau told Golf Course Trades in an earlier interview, “The difference between a U.S. Open and member play is simple. It’s the rough…rough and the length of the golf course,” he notes. “For a U.S. Open, the idea is to test the best 154 players in golf for a week, but you can’t play that every day.”

As result, everyday play at Winged Foot is quite enjoyable, in shoulder season even more so. The members like it that way – equal parts attack and parry. Good golf shots give you a fighting chance on the greens, and bad shots bleed a stroke or two. Heck, when I was younger, I once shot 86 on the West course, but that was in October when the rough was at its absolute shortest and the green speeds at their slowest.

Years later and still a bogey golfer, the East course tends to give me a good thumping (both pre and post-Gil Hanse restoration). But I was eager to play it once more and take a serene nature walk with my buddy, our clubs and the best caddies in the world.

So cut to 8:45 am the next morning, and I’m on a peaceful stroll to the first tee of the East Course, completely oblivious to exactly how upside-down my day is about to be turned. There’s my buddy on the tee, but he’s surrounded by what looks a little league tryout rather than a quiet twosome going off 1 East.

“Jay I goofed,” he says, motioning me to follow him back the way I came. “I forgot I have a match in the club championship this morning. You’re going to be my marker. Meet my opponent and his friend.”

He gestured to an amiable couple of fellows who smiled back broadly.

“Oh…and we’re on the West Course. I forgot the Father-Son is being played on the East. Here’s your scorecard. Meet you on 1 West in five minutes.” And off he sped for some last-minute preparations.

As I started the long walk back around the clubhouse to the first tee of the West, I passed the giant scoreboard. His match was listed – his name and his opponent’s in calligraphy – with my name right beneath, along with the other marker. Oh, look! There’s even room for my score as well, all 18 lashings I stood to bear in the public square, soon for all the golf glitterati to chuckle over.

NOTHING LESS THAN SINGULAR VISION ON EVERY STROKE…OR ELSE!

Winged Foot West for ordinary member play and Winged Foot West sharpened for the club championship are two completely different things. When it comes to playing the West in a tournament of any kind, Christmas can turn into Halloween with one swing. And if you lose concentration or even if you get a bad bounce into a shaggy hillside or roll 45 feet away down the wrong tier of the oceanic green, it brings double or triple squarely into play. Suddenly all the historical references cease to be abstract and start to become downright haunting because you could be next: ”This is where Jack Nicklaus putted off the green and 20 yards back down the fairway,” and “Here’s where Phil smacked the tree and blew the Open.”

Like a horror movie highlight reel, each shot – from the first tee to 18th green – each shot is a catastrophe in waiting, the entire golf course an unexploded mine of triple bogeys. It’s still “tough, but fair” but “tough-but-fair” set up for a much better golfer than me. The West Course will host its sixth U.S. Open in 2020; only Oakmont and Baltusrol have hosted the tournament more times.

“It’s too difficult to keep the speeds at 12-13 all the time,” Rabideau said firmly. “11.5-12 is just fine for member play, a little faster for club championships and the Anderson, and faster still for the Open.”

13 on a stimpmeter is deadly, and the juicy, 3-1/2 inch primary rough more formidable still. There would be no muscling a 5-wood out of the rough to the green today. More like a 7-iron, even a wedge for a really deep lie. And if that’s not enough, the West plays to a little over 6,700 yards. Five of the par-4s would be over 440 yards, almost all to elevated pedestal greens. We mere mortals play it as a par 72. The pros and the national event contestants play to a par-70: nine becomes a 525 yard par-4 (uphill!, and 16 becomes a 490 yard par-4 (uphill, with a ludicrously narrow green).

“That’s what is so compelling about Winged Foot,” stated Rabideau.

I’ve walked that cobblestone path countless times, but there is no walk the one you take thinking you are meat for the tigers. My first swing could be a disaster. Breathe, Jay breathe! In mortal terror as I stood over that first tee shot, the eyes of the contestants, the markers, and the spectators riveted on me, ready to analyze my swing in a heartbeat and offer silent approval or condemnation, I somehow hit the first fairway…quite well actually, left center, a good 220. Golf death postponed, at least for the moment.

Most bogey golfers would find Winged Foot long, longer still due to the constant uphill approaches to the pushed-up, pedestal greens that shed golf balls like car wax sheds raindrops. Most par-4s could be driver-3-wood-wedge. However, that’s a perilous game plan for a bogey golf at Winged Foot. Even if you hit the fairway – an absolute imperative, or else you are all but guaranteed of having to lay up – even if you hit the fairway, hitting the green with an exceptionally long approach club brings all the greenside hazards well into play. Winged Foot’s enormous greens have countless swales and tiers, all brought ferociously to life by a 13 stimpmeter. Even with a wedge in your hands for a pitch, sometimes the closest you can get the ball to the cup is 25-45 feet. Coming out of the rough or a greenside bunker could still leave you in three-putt city or worse.

Tacking your way around the golf course, limiting damage as much as possible, avoiding the rough and the bunkers as though they were live scorpions, is the way to survive Winged Foot West on tournament day, and that’s exactly what I did. The driver cooperated, and I hit 10 of 14 fairways. I laid up approaches to safe places to wedge onto the correct tier. I made a few short putts and my lag putts were solid enough to limit me to just one three-putt all day. Of course, there was a triple on a par-5 after hitting a tee shot just three feet off the fairway. There was a duff out of the rough. But there were no embarrassing walks of shame, no needlessly wasted shots or penalties, and no mental errors.

It was a war of attrition, but a satisfying one. The 93 I scraped out that day was a more solid round of golf than my 86 as a youngster ever was because I was challenged more severely. And I responded with the gutsiest round I’d played in years. It was a ton of fun anticipating the round, and the celebration afterward was as good as golf gets, but from the first tee to 18th green it’s all hands on deck and all times. It underlines one inescapable truth: The West course is indomitable, unconquerable. No matter the event, Winged Foot always wins every time, as it should be.