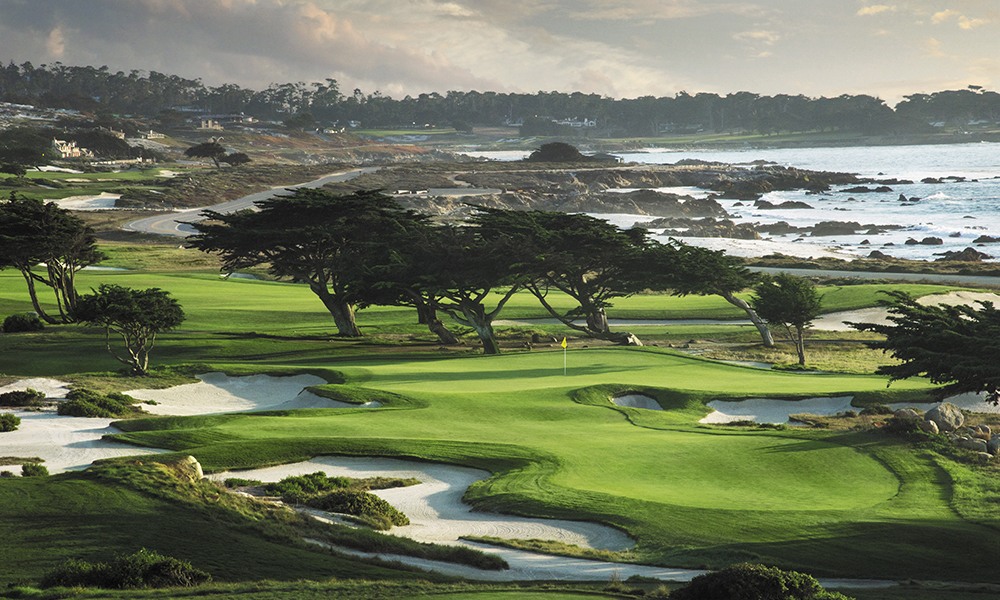 The first rays of sunrise caress the Monterey Peninsula Country Club and the California coastline gently. The long, low Neptunian roil of the waves crashing into the shore is broken only by the mournful howl of the sea lions gathered underneath the cliff side, two mothers protecting their four young.

It’s peaceful…pacific, if you will. The baying of the beasts is in perfect harmony with the wash of the surf. You could fall deeply asleep to its soothing metronome.

It’s tough to tear yourself away from this scene, but happily, both golf courses play out and around the coast, so it will be a constant, welcome backdrop all day.

MPCC is the west coast’s proper rejoinder to Winged Foot; it is the only 36-hole private club that has two courses so equally strong architecturally and so critically important historically. Winged Foot may hold men’s major championships, but MPCC has miles of gorgeous Pacific shoreline, an iconic hazard along which so many greens and tees can precipitously cling. Set perfectly between Pebble Beach and Cypress Point, the Shore Course and the Dunes Course are as natural and idyllic a setting for golf as any on the planet.

Every day you get to rise with the sea lions, and every night the sun sets the sea ablaze for your delight. That’s been the blessing the Golf Gods have bestowed upon Bob Zoeller, head super at MPCC for the better part of four decades.

“It was great,” he recalled fondly. “The first home I lived in was an old super’s house on the back of the driving range. Back in those days I caddied when I was eight, and then got to work on the course when I was 11 – mowing and hand watering tees. Literally, I grew up on the course.”

At age 12, Zoeller got a front-row seat as Eugene Country Club underwent a Robert Trent Jones, Sr. renovation; he watched the entire process first hand at a young age, and the seeds planted in those days would grow deep roots, springing into glorious bloom years later.
Also, a fine player during his junior and high school golf days, Zoeller made the U of Oregon golf team while majoring in the difficult field of life sciences.

“I took lots of chem and bio, not entirely sure what I wanted to do. I applied to dental school but didn’t get accepted.”

That’s when his Dad came through with the only job offer he’s ever needed.

“When I was a sophomore my Dad left Eugene and took a job at MPCC. So just a couple months before my graduation, Dad called and said he needed help there. I figured for a year or two, I’d give it a try.”

But shortly after Zoeller arrived at MPCC, his father was named Director of Golf for the Pebble Beach company, a position he held for six years before becoming Executive Director of Northern California Golf Association. Happily, he had an understudy handy.

“The board asked me if I wanted to be super at MPCC. I thought it was a stretch, but they figured Dad was still here and I’d get plenty of guidance,” Zoeller confided. “It worked out; I got a great opportunity at a young age, and I stayed here the whole time.”

“The whole time” includes up close and personal work on the two monumental renovations that have taken place under Zoeller’s watchful eye, changes that have vaulted the club onto everyone’s must play bucket lists.

First, Mike Strantz, “The Maverick” – completely redesigned the Shore Course from 2003-2004, turning what started as a rudimentary design by regional architect Bob Beldock – flat as a pancake, according to Zoeller and others – into a majestic, sweeping artistic and strategic masterpiece. Known for courses that were visually arresting and wildly fun, Strantz’s design stands out boldly from the plan for the site the Palmer Group submitted in the early 2000s, one that ultimately never came to fruition. Palmer’s proposed design had only one hole – one – hugging the coast, but mostly, tee shots played away from the shoreline. You couldn’t see hardly any of the beautiful vistas.

“We were with the Palmer group for 14 months, and they were terrific, but we kept running into permitting issues, and they wanted to move a lot of dirt, and in coastal California, that’s a sensitive issue,” added Zoeller. “We just weren’t going to be able to make that plan work, so we were fortunate to hire Strantz.”

Strantz knew he was designing between Pebble and Cypress, cheek and jowl with Mackenzie, his favorite designer of all. He was also painfully aware that his oral cancer had returned and, worse, had metastasized. What had already claimed 90% of his tongue was soon to claim his life. Strantz knew that this was his last golf design. In fact, he told his design associate Forrest Fezler, “I think I’ve designed my last golf hole,” when he completed his plans for the par-3 11th, a sketch and some spray-painted lines.

“Mike’s greatest genius here was his flow of horizontal movement to the fairways; you hit 16 shots at the Pacific Ocean. Mike reversed the routing of the ocean holes, and now you see Cypress and Spyglass as a backdrop,” Zoeller noted.

Strantz also laid out the course in an out and back routing with an asymmetric sequencing of holes. Fibe par-5s and five par-3s add greater variety and result in a par of 35-37=72. Such asymmetry adds indelible character and results in the golfer using an even wider variety of clubs during the round.

The club proudly embraces its Strantzian heritage. They’ve made exactly one change to his work this far – they moved the 18th green. Other than that, it’s still Strantz’s proper rejoinder to Cypress and Pabble, and stands proudly shoulder to shoulder with that venerable company.

The mists of time shroud some of the ancient history of the Dunes Course. The first name associated with the club is Seth Raynor’s, but we also know that he died in 1925, mid-way through construction.

Suddenly thrust into the spotlight, Raynor’s second in command, Charles “Steamshovel Banks, was forced to work several projects at once in all corners of the country. MPCC had no choice but to turn to Robert Hunter and Alister Mackenzie, the opposite direction artistically from Raynor and his geometric shapes and Old-World templates. They completed their design in 1926.

After Hunter and Mackenzie there was some bunkering work done by Bobby Jones, Jr., and then a major renovation with Rees Jones in 1998, but that was low budget – there wasn’t enough money to do sand capping or drainage. It was just cosmetic, greens and bunkering. But in 2015, the club hired Tom Fazio, and the redesign he completed the next year has been just as much a success as the Shore course.

“I missed a flight, I had such a good time talking to Tom for 2-1/2 hours,” chuckles Zoeller. “Talking to Tim was like talking to Strantz. They mark every bunker, every fairway line, and every tee box themselves. and they look at the same things: horizon lines and the flow of the course in three dimensions. Even their language was similar – they were so much alike. Is was great to have that feeling rekindled.”

That’s no surprise, Strantz was once one of Fazio’s design associates, much like Tim Jackson, Scott Hoffman, and David Kahn, the three associates he often uses for West Coast projects.

“They were close by and they did the everyday work,” said Zoeller. “From my standpoint, I considered them to be the younger bros of Strantz!”

Like the Shore course and Cypress Point, the Dunes course is a transitional routing. Starting in the forest, you play through several holes of dunescape – 9, 10, 11, and 12 – then reach the ocean for holes 13 through 15, before heading back inland and finishing in the forest.

Between the two restorations, the club added 32 miles of drainage under the fairways. Where in the past sometimes both courses could be closed by severe rains for days at a time, not both boast year-round playability. Most players can’t believe they aren’t playing on sandy soil.

“They look very good, and play even better,” affirmed Zoeller

And so as night’s velvet curtain descends, and the sun’s fire is extinguished by the boundless Pacific, once more we are left to the lapping of the waves, the reflection of the Harvest Moon on the rippling sea, and the noble cries of the sea eagles as they circle, then soar, riding the wind to their palatial aeries. Far below, the golfers walk on, as they have for close to 100 years, and with the right kind of eyes, you can still see the shadows of all those that came before. Above all, MPCC is timeless. You have no idea what year it is when you are playing – and that’s the greatest compliment that a superintendent can get.