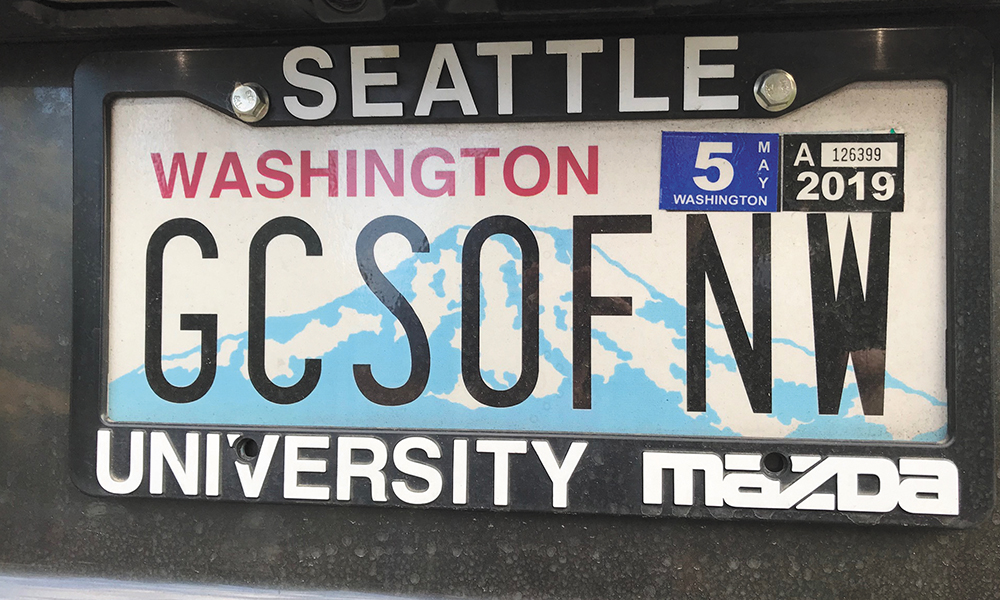 This column will feature the author’s recollections of his 31 years as a golf writer. The installments will stem from his many travels and experiences, which led to a gradual understanding that the game boasts many intriguing elements.

It’s funny how ideas, forged subconsciously by realities and dreams, evolve into full form, seemingly at the most random times.

This particular brainstorm turned out to be a life-changer. It started with sleepy scrawls on a Post-it at 3:00 a.m. It said: “Write definitive Northwest golf guide.” The idea seemed so compelling after I awoke the following morning it evolved into cursory research to see if anyone had done such a thing before; getting an okay to proceed by my wife; and making a trip to a legendary marine supply store in Seattle. It was also enabled by enough naivete to fill a Junior Miss beauty pageant.

I had no clue as to what I was getting into but was highly motivated to finally be my own boss and forge a new career writing about something I truly cared about.

This is the genesis of a quixotic quest – and ultimate success – in compiling my magnum opus, “Golf Courses of the Pacific Northwest,” the third edition of which contains first-hand descriptions of 550 golf courses over its 622 pages. Stretching 11 years – from 1987 to 1998 – while spanning over 200,000 miles and five different automobiles, the odyssey represented some of the most wonderful moments of my 68 years on this planet.

It also established a career that’s allowed me to play over 800 golf courses on four continents, be involved in many segments of the golf industry, and meet hundreds of smart, illuminating people. In other words, that original aha moment led to me becoming one lucky guy.

The wacky book idea took shape in spring 1987, but it had been festering for years. I’d worked for nine years as a technical and copywriter, a researcher, a scriptwriter, always for a company before deciding to go out on my own.

I’d always wanted to be paid as a writer, a seed planted in, of all places, Germany, during the Vietnam War. After being drafted into the U.S. Army in January 1971 and training at Fort Polk, La., then Fort Meade, Md. (as a riot-control military policeman), I filled out my two-year stint with the headquarters company of the 503rd MP Company in Frankfurt.

While enjoying police duty at First Army Headquarters at Fort Meade – where I ticketed cars of illegally parked four-star generals, played dog-catcher, directed traffic (with my white MP gloves magically slowing thousands of speeding cars filled with employees going to work at the National Security Agency in nearby Laurel, Md.), chased AWOLs and guarded prisoners – the tasks at my German assignment were boring. Guarding gates on the perimeter of Drake Kaserne, standing at attention during retirement ceremonies for brass leaving the 3rd Armored Division (aka, Gen. Patton’s famed “Third Herd”), and assisting local polizei at often-gory traffic accidents was simply dreadful.

When I heard that fellow Spec. 4 Daryl Bruischat was being discharged and heading home to Holland, Mich., to start what became an acclaimed career as an artist, I jumped at the chance to take his job. Daryl’s sole responsibility was writing police reports for the commanding general. Nothing more, nothing less. This role let him skip the surprise midnight wake-up calls for “alerts” to escort massive M-60 tanks out into the countryside where they blasted away at trees and other objects. And Daryl didn’t have to cope with the giant rats that often skittered between the legs of gate guards on the midnight shift.

Thankfully, I got his gig. So, every morning at 7:00 a.m. sharp – over a 13-month period – I delivered my daily report. Major General Kraft wanted to read about the illicit activities his 13,000 “boys” were up to the previous day while partaking in his morning coffee and donuts. Gathering up the reports at the Provost Marshal’s Office at around 3:00 a.m., and using an old and decidedly the unelectric Underwood typewriter, I typed up the original report and 16 carbon copies (copy machines apparently hadn’t been invented yet) for distribution to various Division commanders. To this day, my wife can hear my loud typing throughout the house.

Upon being discharged in January 1973, I went to Billings, Mont., and worked at the Post Office while studying English at Eastern Montana College on the GI Bill. Having taken all the available English classes there, four years later I returned to my home state to finish my Creative Writing degree at the University of Washington. With a new wife and baby daughter now in tow, after graduation I took whatever writing job I could to further my budding career. While working full time, I even went without pay to moonlight as the managing editor of a new boating publication, where I gained valuable insights into color separations, design and layout, print processes, advertising, circulation and other magazine matters. I also toiled for various electronic firms (passing up the chance to be one of a young Microsoft’s first tech writers as I didn’t like to write about software) and did research papers for big outfits like Weyerhaeuser and Daishowa Corporation.

Once my second and current wife approved the idea, I began my golf-book travels in spring 1987.

The original concept was to walk, photograph, and take notes while playing every golf course that qualified for the book’s title (by that I mean, not just public, resort, or private facilities, but every single golf course in the Pacific Northwest). I also sought to make the book “pure,” therefore paying for golf rounds, food, and accommodations to maintain editorial control. To cut costs, I outfitted our Volvo station wagon with boat curtains bought at Doc Freeman’s marine supply store so I could use the back end of the vehicle – a lemon that came to be known as the “Antichrist” – as my “hotel on wheels.”

Though I never asked for free golf, other original criteria quickly vanished. I realized that if I tried to play every golf course, I likely never would finish the book in my lifetime. I made this decision soon after the adventure started. My first day of research involved leaving my sister’s house in Vancouver, Wash., at 6:00 a.m. and driving to Elkhorn Valley in Lyons, Ore., roughly 70 miles away. I arrived at 8:00 a.m. at the golf course – rated then as among the top-five nine-holers in the U.S. by “Sports Illustrated” – before heading to my next stop at Tokatee east of Eugene. Unfortunately, I misread the map (Waze and Google Maps were not around then) and ventured east instead of back west to Interstate 5, a much shorter route. That miscalculation led to a very long drive and an arrival at Tokatee at 4:00 in the afternoon on the heels of a high-school tournament.

I played 18 holes – while schlepping my clubs, camera, and notepad – at the beautiful, Ted Robinson-designed Tokatee. Completely exhausted and somewhat dazed after 27 holes of golf and 350 road miles, at around 8:30 p.m. I bore east to Bend with no idea of where I’d be spending the night. Under blackening skies, I pulled over at the only commercial concern in this remote area along the McKenzie River, Belknap Hot Springs, and asked the receptionist if I could sleep in its parking lot. In my car. After looking at me rather querulously, she replied, “Never heard of that one, but I guess it’s okay. That’ll be $8.” Following a restless night with little to eat other than beef jerky and granola bars, I slogged on to Bend at daybreak.

From that point forward, I decided to take a golf cart as my Canon camera was heavy, and writing comments and observations in an unwieldy notebook while playing golf was, literally, pain and very time-consuming. I also made a habit of bedding down in cut-rate hotels.

Lo and behold, following an ill-advised attempt to include massive British Columbia in the book, three years later I had a million-character manuscript. But rejections soon came from 13 publishers; all replied that golfers didn’t comprise a big enough market to justify any-sized print run. Luckily, No. 14, Alaska Northwest Books, took a chance and signed me to my first book contract.

The publisher, then the region’s largest, hired famed Seattle graphic designer Art Chantry to do a painting for the book cover – a knock-off of Ben Hogan’s famed 1-iron finish at Merion with Mount Rainier juxtaposed in the background. Within six months, my book became the top seller among Alaska Northwest’s 150 titles.

My trips never extended beyond four days. Regardless of the direction I took from Seattle – whether to the far reaches of western Montana or the vast wilds of eastern Oregon – I’d depart early Monday morning and be home for my family by Thursday evening or Friday morning. Some of these voyages within the book’s 19 geographic regions/chapters extended over 2,200 miles and involved upwards of 30 golf facilities. I visited them all and played well over half of them (thanks to repeating visits). I also prepared all the book’s specialized maps, overlaying upwards of seven, large Mylar sheets while hand-drawing and using press type to carefully incorporate the elements – climate, turf type, community nature, golf seasons, roads, etc. – that best represented each area’s shared characteristics.

To make a long story short, I ended up with the rights to the book’s second and third editions, and started my own publishing company. The third edition of “Golf Courses of the Pacific Northwest” (designed by my wife Anni and featuring a cover painting by our artist-friend Frank Gaffney) covers all the layouts in Washington, Oregon, western Montana, northern Idaho, and Sun Valley. To this day, it remains the definitive golf guide for the region. It’s quite clear that no one is insane enough to duplicate the effort. By then, I’d visited all the golf courses and saw every hole, shooting well over 2,000 color photos on that bulky Canon.

The golf courses ranged from very remote six-holers with sand greens to big-time resorts, busy munis, exclusive clubs and ultra-private layouts played only by their owners and friends. In all, I traveled – all on my own dime (gas and hotels were cheaper in those days) – a couple hundred thousand miles by the time the third edition (which, sadly, is no longer in print) came out.

Ever since that original idea came up, I’ve delved deeper into golf, becoming the managing editor of “Back Nine” (where my “Making the Rounds” first appeared in 1988) and “Golfing the West” magazines. I started “Golf Report Northwest,” a golf-project tracking report that later morphed into the national and online golfconstructionnews.com when I took a 15-year break from books to work for Cybergolf.com. There, I oversaw a large freelance staff and wrote, edited and/or posted over 16,000 stories. I also co-founded the Northwest Golf Media Association; served as Media Director of the Fred Couples Invitational; co-authored (with British Columbia historian Mike Riste), edited and published “Championships & Friendships: The First 100 Years of the Pacific Northwest Golf Association.” In all, I’ve written and/or edited and published nine books, five about golf.

So, with this rambling preamble out of the way, my next installments of “Making the Rounds” will venture into some of the wild, woolly and indelibly memorable moments while on the road or on a golf course. I hope you’ll enjoy the ride as much as I did.

Jeff Shelley has written and published nine books as well as numerous articles for print and online media over the past 30 years. The Seattle resident is the co-founder of the Northwest Golf Media Association and board president of First Green, an international, nonprofit program that provides environmental and STEM education outreach using golf courses as environmental learning labs.
jeff@fairgreenspublishing.com