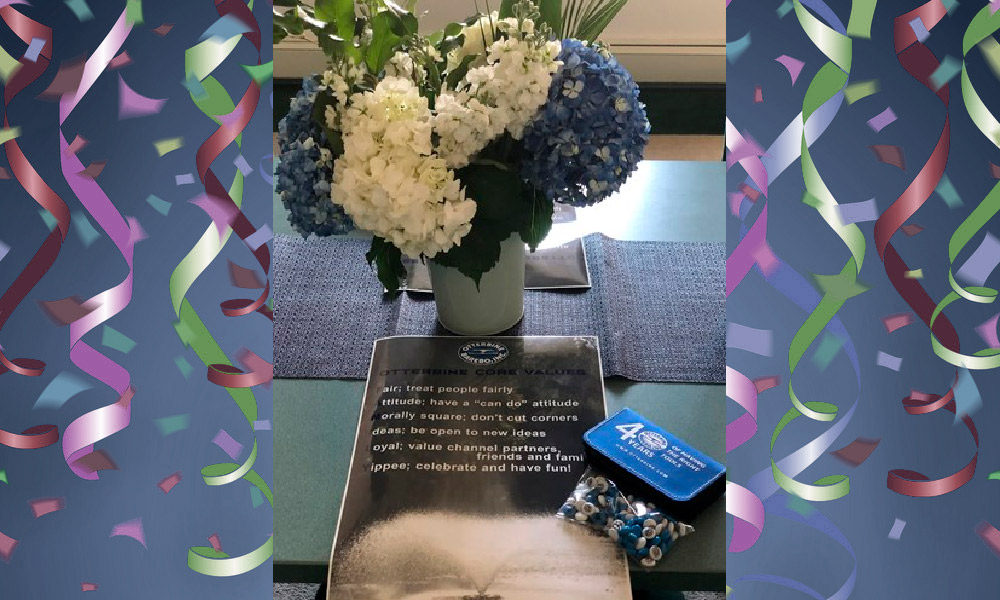 Otterbine Barebo, Inc. is celebrating its 40th anniversary as the leading manufacturer of pond and lake fountain and aeration systems. Over the past four decades, this family-owned, and operated business has continued to surpass expectations by honoring its core values.

“We pride ourselves on delivering the highest quality, efficient, and reliable products possible,” said Carla Barebo-Ott, Otterbine President and Co-Owner. “We achieve this through our core values, which are treating people fairly, having a positive attitude, being morally square, staying open to new ideas, remaining loyal to our partners, and celebrating our team’s successes.”

Back in 1952, Dick Ott invented the first Otterbine aerator. The product’s name pays homage to its inventor as well as the type of the machine used to move water in the first model. From its inception to the late ’70s, the product was used in wastewater treatment and aquaculture applications. During this time Bob Rodale of Rodale Resources acquired Otterbine. Rodale, a strong supporter of organic farming and agriculture, continued to focus on the utilization of the product in the aquaculture market.

Rodale went on to hire Charles A. Barebo first as an engineer and then as Otterbine’s President to design the company’s Concept 1 line and other specialized products.

In 1980 Charles A. Barebo and his wife Terry Barebo bought the company, officially incorporating it as Otterbine, Barebo, Inc. Over the next decade, they transitioned their children into the business. Seeing the potential in the product, they tasked the second generation with increasing Otterbine’s presence. The company’s product offering grew to include fountain lighting, diffused aeration, industrial aerators, giant fountains, and floating dewatering pumps.

The second-generation quickly seized new opportunities both domestically and internationally by expanding the company’s marketing efforts into the golf, commercial, and municipal markets. They also launched the product internationally by setting up distribution overseas.

Otterbine was thrilled to continue its tradition of a family working operationally in the business in 2017. The first third-generation family member joined the company’s team full time; followed shortly by another in 2019.

Otterbine Barebo, Inc. continues to innovate and make significant investments in research and development. They aim to improve the quality of the environment in a natural way, whether it be water quality or increasing water’s beauty in a natural way.

“We’ve been fortunate enough to have some amazing relationships with our channel partners over the years. It’s thanks to those relationships that we can provide our customers with the most innovative and effective water quality management solutions,” said Barebo-Ott.

Otterbine Barebo, Inc. has been setting industry standards in water quality management for over 40 years by combining both function and beauty with their extensive line of surface aerators, subsurface aerators, and giant fountains. Otterbine products are available through their worldwide distribution and service network.

Golf Advisor Ranks Naples Lakes #6 Among Top Florida Courses
Will You Test Positive For Your Actions During Covid-19?
To Top