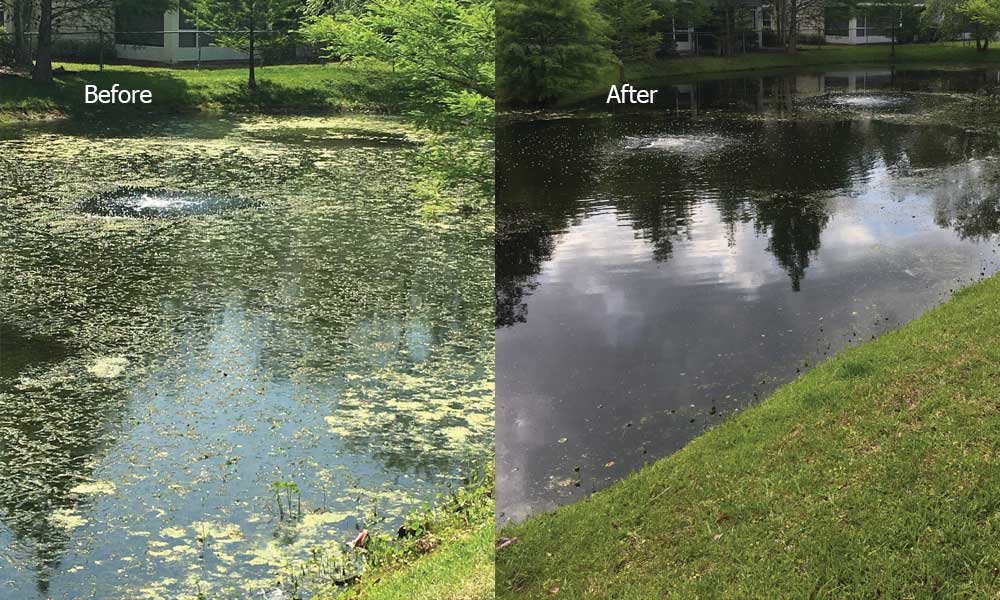 Copper is an incredibly diverse element, and depending on the selected chemical formulation, can be used in a variety of ways. Copper in its different forms is found in artwork, plumbing, wiring, and many other areas. However, just as copper is everywhere, so is water; and often the results of copper production and usage end up leaving residual copper in the water. But not all copper is the same, and not all copper is necessarily bad.

One of the major environmentally beneficial uses of copper nowadays is as a control for algae. Algae is found everywhere and plays an important role as a producer of oxygen; as well as a food source. Unfortunately, anyone who has spent enough time around ponds has seen what happens when algae goes crazy. Affected ponds can go from picturesque to green soup over the course of a day. In cases like this, immediate action is vital. While algae is beneficial most of the time, when algae blooms, it represents a real threat to aquatic life. Not only do blooms of algae take up large amounts of oxygen, but some species even produce toxins that are deadly to other organisms. So, if this is a problem a pond owner faces, how can copper be utilized?

Related: Body of Water, or Headache

As mentioned previously, copper exists in multiple chemical formulations, and for copper-based algaecides this is no different. These can be grouped into three general categories: copper crystals, liquid copper, and chelated copper.

Copper crystals are exactly what they sound like, crystallized copper. This is the cheapest and oldest method of applying copper as an algaecide. Product just needs to be thrown into the water where algae is present, and the crystals will dissolve, killing the algae it touches. While this sounds easy enough, this method is also the most damaging. Since this only kills what it touches, a large pond could need quite a bit of copper thrown in to get an effective result.

The second group, liquid copper, covers a very wide range of products that use different mixes of copper to varying effects. Liquid copper is more efficient than copper crystals because it can actually stay suspended in water for longer, compared to copper crystals which sink straight to the bottom. However, the same issue remains in that to achieve the greatest algae kills, more product needs to be used to get copper to all of the algae.

The third group, chelated copper, is a more complex version of liquid copper. While chelated copper algaecides are also a liquid, they are defined by that first word, chelated. This is the name given to a chemical process in which a form of protective covering is attached to the copper atoms. Chelation is analogous to the use of a shell around an M&M. The shell around the chocolate protects it from the outside and only starts to melt in response to heat or being chewed. The reasoning behind using chelators is exactly the same as why the shell is on an M&M; so the main ingredient of the product isn’t used up too early. In a real-world application, when chelated copper is applied to a bloom, the copper releases more gradually as the protective covering slowly dissolves in the water. This equates to two major benefits for applicators. The first is copper stays active in the water for a longer period as the copper is not all released at once. The second benefit is that less copper is needed to achieve results. With the copper active for longer, less product is required to hit the target algae.

When it comes to choosing algaecides it really is an open-ended question. Chemical effectiveness, algae presence, and cost, among other factors, all need to be considered. While a definitive answer for the best product cannot be provided, hopefully, this makes the selection process a little more stress-free for those who are looking to clear up their waters.

Patrick Simmsgeiger, Founder and President of DWI, is a licensed Aquatic Pesticide Applicator, Landscape Contractor and Certified Lake Manager. He is one of the few individuals in the industry who is an expert in all stages of aquatic treatment; from product development and manufacturing to application and treatment.

Makers of Soilfloc GC and Soilfloc Pond Sealant -Saving water since 1976
Mower Down!!
To Top