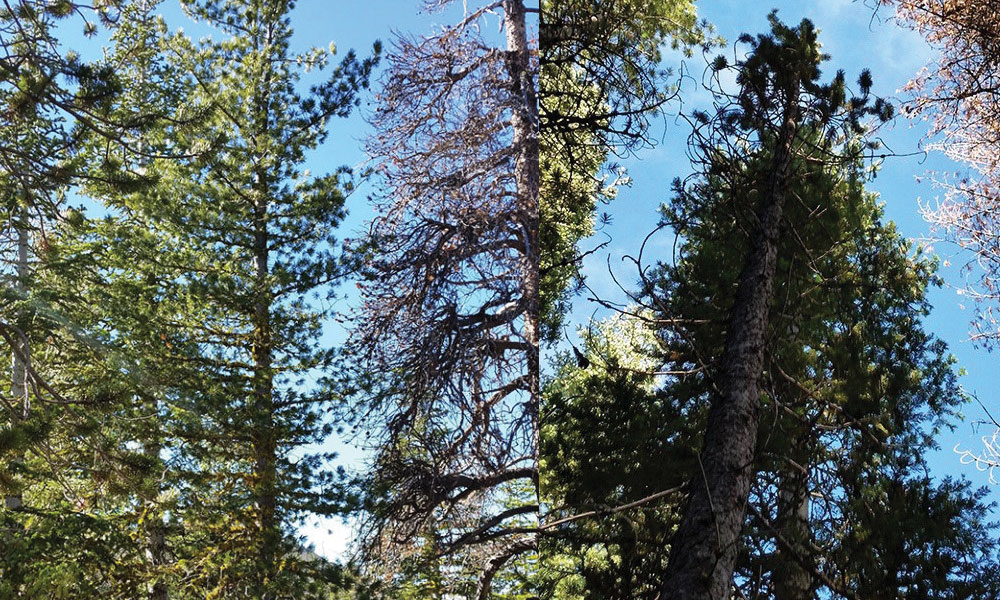 Conifer, literally “cone-bearing”, a reference to a family of gymnosperm tree that reproduce by means of “naked seeds” (the literal meaning of gymnosperm). You are no doubt familiar with a number of species, particularly common at this time of year, Balsam and Fraser firs are cut for Christmas trees. We may think of conifers as evergreens, but this is not always the case. Deciduous gymnosperms include Ginkgo biloba (Gingko or Maidenhair tree), Metasequoia glyptostroboides (Dawn Redwood), Larix decidua (larch) and Taxodium distichum (Bald Cypress). Conifers are interesting from their anatomy and physiology as well. For example, some are referred to as resinous or non-resinous conifers. Resinous conifers are trees that have groups of parenchyma cells (living cells) in the sapwood that form a resin duct. Examples are pines and spruces. When injured, resin is pitched from the tree, a natural wound response. Non-resinous conifers do not have pre-formed resin ducts in their sapwood, but may have them in their bark. An example of a non-resinous conifer is the Eastern hemlock (Tsuga canadensis).

Let’s have a closer look at conifer anatomy from the inside out. The very center of the tree (which may or may not be the middle of the tree) is pith, which supports the tree in the first year of its life. The surrounding sapwood or xylem is made up strictly of tracheids. In hardwood (i.e., angiosperms) trees, sapwood is made up of vessels and tracheids. Vessels form a straw-like tube, whose function is to move water and dissolved solutes from root to shoot. Vessels are larger and depending on tree species, they can be from 20 to 200 microns across (big). In contrast, tracheids are small, restrictive vascular tissue of only 3 to 10 microns across (small). The size of this internal vasculature has a consequence on the rate of the movement of sap in trees. In 1839 two researchers working independently, one in Germany (Hagen) the other in France (Poiseuille) developed an equation that expressed the rate of flow through a vessel with respect to its diameter. To settle the argument of who was the first, it became known as the Hagen-Poiseuille equation. The equation states in essence, that the rate of flow increases with increasing vessel radius, raised to the 4th power. Got it? Good…hold that thought!

As the sapwood ages in trees, it becomes non-conductive. The older sapwood functions to support the tree and is storage for waste (such as resinous terpenes and phenolic) materials. This changes the sapwood chemically and physically and older sapwood is termed heartwood. This heartwood may be red in color. The role of heartwood is structural: it keeps a large tree standing. The sapwood in mature conifers may be as wide as 2” (5 cm) thick, which is functional in conducting liquids.

How then does sap (that is, water and solutes) move in trees? In order to answer this question, we need to address the environment in which the tree is growing. For one thing, there needs to be adequate (available) soil moisture. Fine, non-woody roots absorb soil moisture and dissolved minerals. How does liquid then move from the root plate to the top of a tall tree, say a giant redwood (Sequoia sempervirens)? Four things need to work together. These are (1) Root absorption (and root pressure) plays a role, (2) the characteristic that water is polar (carries a charge) so it sticks together, and (3) that small pores on the underside of the foliage (needles) are open to air and (4) an ambient vapor deficit occurs so water moves out from the leaf. A vapor deficit requires that the air surrounding the small pores in the leaf (stomates) is drier than the internal leaf environment. The sap rises in the tracheid column sticking together by hydrogen bonding (the hydrogen has a “+” charge and the oxygen, a “-“charge). We all know that opposites attract!

So if moisture is lost through a vapor deficit when there is ample soil moisture but less moisture in the air, what happens in northern winters when the ground freezes and roots can’t take up water, but cold winds blow? And why then do most conifers hold onto their foliage through the winter months? It turns out that conifers have a strategy. The stomates (tiny pores) are surrounded by guard cells, which close the opening when there is an internal moisture deficit to protect trees from dessicating. Further, the foliage (needles) is thin (stealthy) and covered with a protective layer of wax, which prevents water loss when cold winds blow. But why hang on to foliage all year long? Well, there are a number of reasons. One is that conifers have living storage cells (called parenchyma) that are only a single thickness wide (hardwoods have multiple layers of parenchyma for storage, but that is another story). So carbohydrate storage is limited within the tree. The liability of retaining an organ (leaves) through the wintry months is also an opportunity. Soils are not always frozen in the winter. Sometimes they thaw, particularly in early spring, when hardwoods are dormant, conifers that retain their needles can photosynthesize that is, they are making their own food when other trees are still inactive.