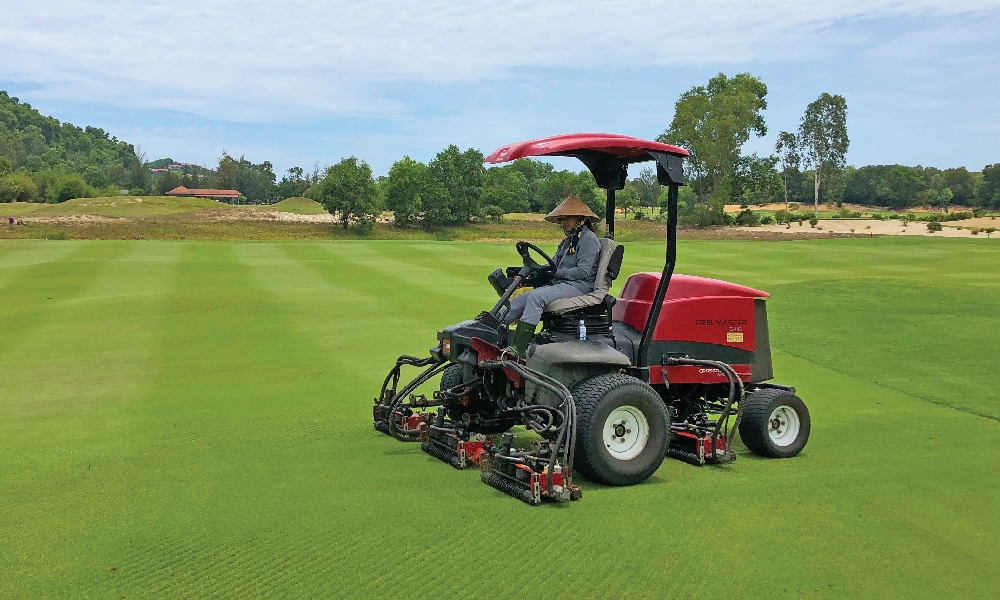 Robin Williams made that line famous in 1987 with the hit movie, but recently I had the opportunity to say that very line every morning for almost two weeks. For those who have not traveled to Vietnam recently, it may seem like a country that is still forever tied to the war that ravaged it over 50 years ago, but nothing could be further from the truth.

Today, Vietnam is still a hotbed, but this time it is Golf and the country is exploding not only with golf courses but GREAT golf courses. Some of the World’s top architects have already left their mark on Vietnam with their design prowess and the latest course to be built is in a central area of Vietnam that has become a financial powerhouse, Da Nang City. While the city bustles with high rises, commerce, and business… on the outskirts lies a small town called Hoi An which is treading new territory.

Hoi An is a charming tourist hotspot where people from all over the world come to enjoy the culture, great food, and endless activities. Prices are low, service is impeccable and personal services are a bargain. At night the town is spectacularly lit up with lanterns of all colors lining the streets and shops. Restaurants are full and the aroma of Pho, a local delicacy, fills the streets.

This area has had everything for years, but golf and all that is changing now with the new Hoiana Shores Golf Cub getting ready to open in September 2019. This was the reason for my visit. I came to map and survey the golf course for the owners to give them “proper measurements and 3D graphics of their holes”, but the remarkable beauty of Vietnam and its people ended up being a fringe benefit I hadn’t expected.

As temperatures mid-summer are often above 100 degrees with little wind and high humidity you would think growing in a golf course would prove quite challenging. Throw in the rainy season that can yield 25 inches in just a couple of days and you have quite the challenge as a superintendent in the tropics. I caught up with the superintendent at Hoiana Shores along with a few other gentlemen at other courses that are helping create, grow in, and maintain these great masterpieces that are now being built here.

Rob Weiks is the Director of Turfgrass Management at Hoiana Shores and Rob has the task of growing in the golf course that Robert Trent Jones, II has designed here on the shores of Hoi An. As a true links course, it takes a beating from the sun and the direct wind coming off the ocean. Rob is no beginner as you might imagine and has a pedigree to match the stature of this new design.

Rob decided early in life that he wanted to see the world. This has led him to work in different positions in Turfgrass Maintenance in UAE, China, Malaysia, India, and Azerbaijan as well as his home country of Australia. The variety of places he has worked along with each course’ varied needs has given him the ability to handle his task here in Vietnam with relative ease. But surely there have to be challenges that no experience can overcome?

Rob told me the number one challenge is staffing due to the fact that there has never been any formal Turf Grass education in Vietnam. What little people knew about turfgrass care had been handed down by other unqualified individuals leaving a void in this growing market. Rob was asked to write a syllabus for the local government and now they have created an accredited certification program to properly train people for a “trade” in golf course maintenance.

Clean water here comes from groundwater filled by the rainy season. The reservoir is fed from a large open groundwater lagoon which is filled by artesian streams coming from nearby mountains heading toward the ocean. Rob stated, “we are only allowed to use what is topped off by rainfall and this is closely monitored by local government authorities”. This can pose a big problem in the dry season as rain is very seasonal in this region. If they go too long without rainfall it means no water for the golf course.

Often, we think of the rest of the world not being so strict on environmental issues but then you would be wrong like I was. In fact, in many places, it is quite the opposite. GEO certification for Environmental Stewardship construction has been in progress for the entire period of construction at Hoiana Shores and the site has had to follow strict environmental guidelines and set up parameters throughout construction to adhere to these guidelines to achieve accreditation.

Linksshape, who are the contractors for the golf course construction, have been critical in achieving this goal. Our ongoing environmental management system for golf course maintenance will be Epar, an Australian / USA based company that covers in detail the specific requirements for Golf course EMS applications.

In the past, the equipment has been a problem, but in today’s economic climate, the builders of these great golf courses in Vietnam all seem to understand the need for great equipment and a budget that will allow the Superintendent to do his job properly. The only real challenge is the amount of time it may take to get an order shipped in from the USA or abroad. Hoiana Shores uses a lot of Toro Equipment and chemical products from Syngenta and Sustane. At times it may take months to get a new shipment so planning is critical.

While driving the golf course and exploring this new design I noticed there were quite a few women involved in all areas of golf course maintenance. It soon appeared there were more women than men so I decided to ask Rob about this when we sat down. Rob stated, “I found out early on that the women in Vietnam are both dependable and focused. They pay attention to details and as soon as we increased our staff in the number of women we found productivity went up as well.”

After Hoiana Shores I spent some time at Laguna Langco, a Nick Faldo Design on the north side of Da Nang City that sits on another piece of pristine shoreline. Laguna is a unique blend of links golf and parkland style that is littered with rice paddies throughout the middle of the course. Rice Paddies? On the golf course? Well…. there is a reason for that.

According to Adam Calver, who is both Director of Golf and the Director of Golf Course Maintenance, the course grows 80,000 kilos of rice to give away to the local communities. What a beautiful idea to maintain the rice paddies and be generous with the community versus the destroy and rebuild the motto of most developers today. It is visually stunning as scenery as well.

Adam carries the pedigree you may expect from someone in his position but I did not expect it from someone so young. He is not quite 40 years old but has already worked in his home country of Canada before he got the job growth in Jumeirah Golf Estates in Dubai and the course has gone on to world-class status hosting the European PGA Tour.
Adam was also hired for the head spot at Cabot Links, a world-class new design in Nova Scotia and finally, for Bukit Pandawa on Indonesia’s Tourist Island of Bali.

Adam seems to find success wherever he goes and some of his talents are more than his grass growing skills. Adam has taken the unusual approach of learning everything he could from the World Class Architects he had the privilege of working with on each design. To walk a golf course with Bill Ceour or to discuss design strategies with Tom Doak, or watch “The Shark” carve a top course out of desert sand are simply a once in a lifetime opportunity and Adam was determined not to waste one second of that time.

Upon his arrival at Laguna, his first mission was to see where the course was having its struggles and how could changes be made easily. The other trick was making sure nothing is done to the course would not be well received by Sir Nick Faldo who spends a week here each year. That proved not to be so difficult as working with Nick Faldo proved quite easy and he was very receptive to Adams suggestions.

First, they cleaned the edges of the bunkers to give it a much more manageable finish and a more appealing look for both golfers and photography. The original shaggy edge bunkers with tons of little fingers were consuming massive amounts of time in maintenance. Mission accomplished and after having seen the prior pictures I believe that this was an amazing transformation that even Mr. Faldo appreciates.

Next up was clearing hundreds of trees. Under the guise of being able to grow grass easier, Adam was able to get approval to remove these trees in various locations on the course. But, there was an ulterior motive that is brilliant. Yes, we all know too much shade makes growing grass a challenge but that was not the real problem. A lack of views of the ocean was a problem. With only two holes directly on the ocean and one of those holes having the majority of the ocean blocked by massive pine trees, Adam saw potential here and got to work.

Now you can see the ocean from a half dozen holes and it is crystal clear from the two oceanfront holes as there are only low sand dunes between the golf and the deep blue sea. Mission accomplished and now the views are beautiful from all the holes on the south end of the course as the Links Style section of this course comes alive.

Adam along with Rob have achieved their dreams of traveling the world while working in the field they love… GOLF. But these two gentlemen have far more ahead of them in their future than in their past. They will both leave their mark on the courses they represent today but in the near future, I am sure they will be on a plane to the next location in the world that holds another Golf Masterpiece just waiting to be discovered.