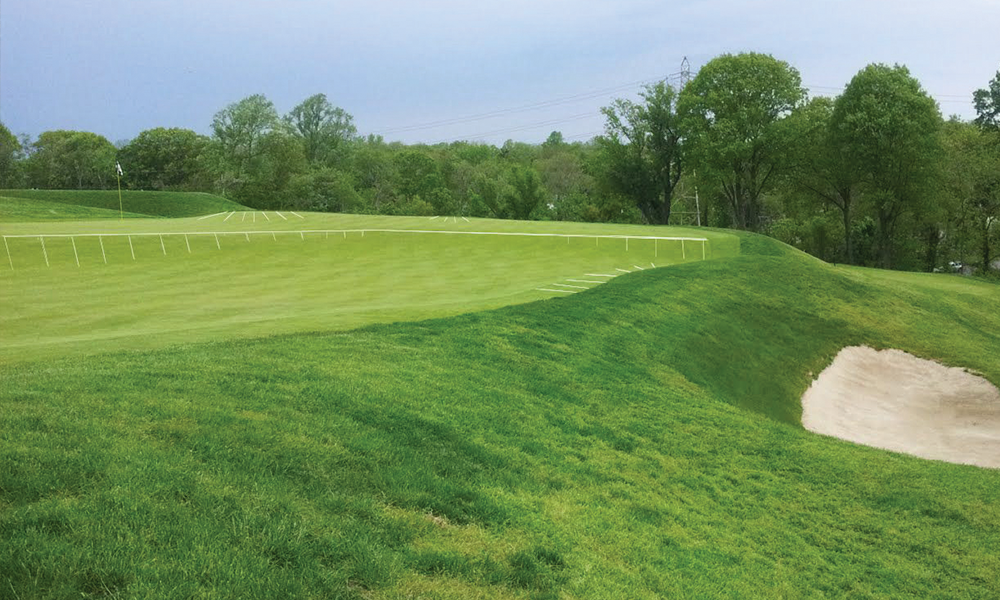 The goal of every golf course designer is to create interest, intrigue, and even test slopes within the contours of the putting greens for the enjoyment of the golfer. And while the golf hole always begins at the tee great design strategy begins from the green and works backward. Many consider the bunkers the face of a golf course, but the brains come from the green design. During a recent trip to Long Island, NY I had the opportunity to visit several fine courses with a variety of green design styles. They ranged from classic reproductions of Scottish designs, undulating free-formed designs, and segmented tournament styles.

When golf was transplanted from Scotland to America many of the first courses were created by sportsmen turned golf course designers like Devereux Emmet, Tom Bendelow, and C.B. Macdonald. They surveyed courses in Scotland and used those experiences to build greens with strategies that emulate the best holes from the kingdom. But C.B. Macdonald and his surveyor Seth Ranyor took the replication to a higher level. With the creation of National Golf Links in 1911, they created ideal links which they then repeated. Courses like The Creek Club, Piping Rock, Chicago Golf, and Mid Ocean Club all have different varied sites, but the greens contours are all based on similar designs philosophy. Greens like the Double Plateau, Biarritz, and Eden used large slopes to divide the greens into sections and require different lines of attack depending on pin position. Others like the Punch Bowl, Road Hole, and Redan allow players to use slopes on and off the green to divert or funnel shots around hazards. Once players arrive on the putting surface numerous smaller movements make the remaining putts challenging. Especially considering the greens were designed to putt at six on the stimpmeter, but are routinely maintained twice as fast. The greatest legacy of these designs is not that they are often imitative by modern golf architects, but after 80+ years the vast majority of the original reproductions remain unchanged.

Rather than reproduce single green strategies many of the earlier designs attempted to recreate the roles of Scottish links land within the greens complex. These large free-formed green designs can best be exemplified by artists like Alister Mackenzie, George Thomas, and a lesser-known Herbert Strong. These architects took enormous risks in their design work. Like the reproduction these “free” architects still used Scottish design concepts but blended them with more complexity. On Long Island, Strong designed Engineers Club. The club was recently recruited, to be the next Trump Golf Club, and while the course definitely has Donald’s over-the-top personality and green contours to match his flowing haircut, it remains one of the best examples of free-formed design. Strong pushed the surrounding hazards into greens edges to influence the interior contours. These bold maneuvers make the entire greens complex flow seamless from one feature to the next.

Fewer of these audacious designs have been preserved due to economic and agronomic pressures. After the Depression advancements in golf maintenance created increased demands for green speeds, uniform conditions, and 72-hole tournament setups. New member expectations made many of these designs unmanageable.

Tournament design dominated the second half of the 20th century and was championed by designers; Robert Trent Jones, Dick Wilson, Tom Fazio, Arthur Hills, and Pete Dye. While the look of their design styles greatly varies, they all create a product with the ability to host both professional tournaments and amateur play. Agronomic conditions were stressed, becoming as important as the design itself. Slopes and ridges were used to section off pinning areas which are maintained at more consistent levels to allow for maximum green speeds. Centers of the greens or pinning areas are used for everyday play, while edges are designated for tournament locations. Additionally when tournament speeds are reached subtle slopes within the pinning area of less than one percent are revealed, making putts break that would be straight under normal conditions. Without being constrained by existing site conditions, tournament designers were enabled to create courses that adapt to different daily setups.

Architects continue to search for the ideal design and strive for a balance between free-formed style and tournament design. The free-formed design has made a strong comeback in the last decade, with modern architects becoming more creative and allowing the existing site to dictate the design. While older courses are resorting to greens closer to their free-formed beginnings and tournament designers are increasingly adopting the free form style.

Joe is the principal at Jemsek Golf Design. Started in 2000 to design, renovate, and restore golf courses around the world. Joe has worked with many other golf course architects, on over 90 projects, in 29 countries. Jemsek Golf Design is dedicated to designing and constructing innovative, accessible, and eco-friendly golf courses worldwide. My goal is to deliver services on time, adhere to a proposed budget, and respect the surrounding natural environment.

The history of Gerber Manufacturing
Chris Tritabaugh, Man of the Hour!
To Top