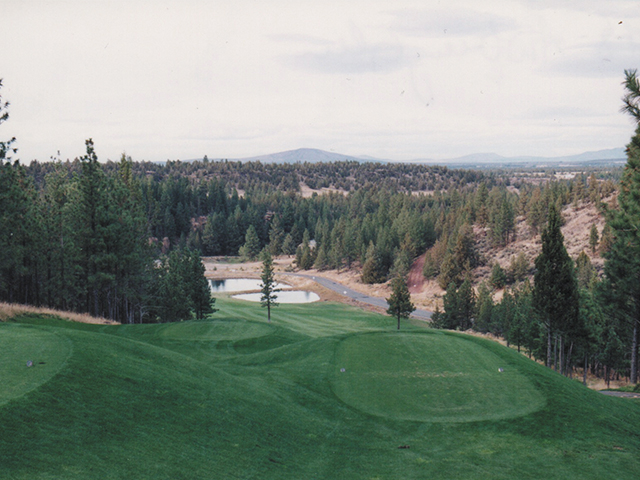 This column features the author’s recollections of his 31 years as a golf writer. These installments stem from his travels and experiences, which led to a gradual understanding that the game has many intriguing components, especially its people.

When you do something so long it’s odd how particular memories surface while others must be deliberately retrieved. Such is the case with this article, which recalls a few characters I encountered along the way. There are many other such folks, which may come to light in future installments. But, for some reason – a human version of random-access memory? – these are a few who recently came to the fore.

Don Cutler – A Man Ahead of his Time

The first course I visited while researching my book, “Golf Courses of the Pacific Northwest,” was the sublime Elkhorn Valley in Lyons, Ore. In retrospect, I couldn’t have picked a better place to start. There I met Don Cutler, who, unbeknownst to him, became one of my personal heroes.

Don set the tone – with a standard of excellence and certain Northwest outside-the-box mentality – for what might await me during my upcoming years of research. So, here’s Don’s story.

While on a fishing trip in the early 1960s, Salem natives Don, and his wife, Bonnie, discovered the 480 acres they ended up buying – in the Opal Creek Wilderness on the west side of the Cascades. After selling their large manufacturing company, the couple sought to convert the property into a resort with an 18-hole course and assorted guest amenities. Unfortunately, that attempt devolved into a costly 10-year battle with state agencies to receive approval. Sadly, or perhaps fortuitously, after expending millions of dollars while wading through regulatory red tape, the Cutlers got approval for nine holes. That’s all.

But, boy, are those holes special. They were recognized as such in the 1980s by Sports Illustrated, which ranked Elkhorn Valley as among America’s top-five nine-hole courses.

Don’s first and only course design stemmed from a desire (and decidedly not the government’s) to protect native plants and animals while preserving a personal tenet of “pure golf.” All told, it took him 11 years to finish this 3,169-yard gem, in 1976. But the labor of love fulfilled Cutler’s goals, as golfers still enjoy hawks soaring overhead as well as elk and deer foraging in nearby woodlands. Wildflowers, rhododendrons, native grasses, maples, and conifers border fairways, while creeks, ponds and a lovely waterfall are on display.

Believing golfers should be in charge of their games, Cutler installed no yardage markers when the course debuted. It wasn’t until his wife heard complaints that he acquiesced by adding birdhouses as 150-yard markers. Don was also way ahead of his time in other areas. In the mid-1970s, the standards were the use of tees designated for men and women. But Cutler created an alternative, which is quite common today. Before golfers reached the first tee, they encountered a large sign informing them to use tees that fit their handicaps, not their gender.

Don was given the go-ahead for a second nine holes 20 years after the first side opening. Unfortunately, he didn’t see that come to fruition as he succumbed to cancer in 1998, a few years before the addition was completed. Probably because he didn’t oversee the new holes, the second side doesn’t measure up to his original work.

Jack Beaudoin – Not a Boring Man

While on my travels around the Pacific Northwest, I met many folks, the vast majority of whom were welcoming and very few who were not. An example of the latter came at the old Top O’Scott Golf Course on Portland’s east side. When I walked into the pro shop and explained why I was there, the manager angrily pointed toward the door and told me to leave.

Miffed and a bit shocked as I’d been receiving overwhelming hospitality up to that point, I exited the pro shop, disregarded this blunt rebuff, went around the building and walked, took notes and photos of the rather ragged track – which now lies underneath a typical residential and commercial development. I later learned that the impolite cur had just been released from prison and suspected I might be a parole officer checking upon him.

More common were welcoming faces like Jack Beaudoin’s. Beaudoin, a former pro hockey player who switched to golf, was about 5’6” and, my guess, a pesky stickman and real pain in the ass to opponents. After leaving hockey, Jack became the designer, developer, head pro, and owner of Mountain View Golf Course in Boring, Ore. When I arrived there, he greeted me like a long-lost friend, insisting that he personally take me on a tour. He proudly stepped into the photos I took of his course, named for its vistas of mounts Adams, Rainier, and St. Helens in Washington and Hood in Oregon.

Jack, who passed away in 1997 at 59 after selling the course, told me he held the course record of 60. Beaudoin enthusiastically noted that the 12th hole, a 183-yard par-3, boasted the region’s highest tee at 180 feet above the green. Jack took credit for a sign beside the 12th tee that read: “This hole may be hazardous to your health.”

Rocking Out at Plains GC in Montana

My MO for travel itineraries was to call ahead and “warn” courses of my impending arrival. But in the late-‘80s, many courses didn’t have telephone, let alone the personnel to answer them. There were several times when I showed up at a so-called Podunk course sans landlines that I heard: “What are you doing here?” Once I explained that the title of my book incorporated all golf courses, people were pleased that I had made the effort to get there.

One of these quirky and remote, off-the-grid places without a landline was Plains Golf Course, named after its eponymous hometown in western Montana.

After pulling into a rutted parking lot, I walked up to the “pro shop” – a tiny red structure a bit bigger than an outhouse. I immediately – and incongruously – heard some very loud rock ‘n roll. Finding the upper half of a Dutch door open, I leaned in and was blasted by “Highway to Hell” at full volume. The golf attendant/“DJ” was an old man snoring loudly as the strains of AC/DC rocked Big Sky Country pine trees.

The rocker’s hair was thick and white. He was at least 80, an ideal age for overseeing Plains sleepy operation. Not wanting to interrupt his reverie, I started walking to the first hole – a straight uphill par-4 crossed above its green by massive and buzzing Bonneville Power Administration cables. Soon, I encountered another elderly gent astride a Massey-Ferguson tractor-mower older than its operator. Both were hopelessly stuck on the grassy slope, unable to move up, down or sideways. I had found Plains’ maintenance staff.

I helped my new friend jimmy the tractor free, and the driver – a retired Seattle firefighter – waved, smiled and then chugged on as I continued my appointed rounds.

Gene C. “Bunny” Mason was a Pacific Northwest golf institution; his fans are legion. Like Cutler, a Salem native, Bunny died in 2010 at age 81. He started his long career in golf as a high-school champion, moved into the club-pro ranks where he became an accomplished player, and, later on, a Vice President of the PGA of America. Among his many accomplishments, Bunny started America’s first destination golf academy at Black Butte Ranch in Central Oregon and branched off into becoming one of the region’s most prolific golf course architects.

For his stellar work at the regional and national levels (he founded the national PGA’s Education Program and Business Schools and was the first recipient of the Horton Smith Award in 1966), Bunny was inducted into the Pacific Northwest Section of the PGA’s Hall of Fame in 1981.

He was unforgettable to many. As a friend recalled at Bunny’s life celebration: “One day while I was working for Bunny at Black Butte, an extremely self-assured customer came in, threw money on the counter to pay for green fees and said, ‘What’s the course record?’ Bunny quickly replied, ‘Two hours and 25 minutes for 18 holes!’ The customer, deflated, walked out shaking his head.”

And this: “While answering phone calls in March for starting times in July, people would ask, ‘What will the weather be like?’ Bunny would reply, ‘I guarantee we will have weather!’ “

Bunny and I go back to my start as a golf writer. He appreciated my efforts, especially the three editions of my book. He understood what I had decided to tackle. While active in course design, he subscribed to my golf project-tracking reports, “Golf Report Northwest,” “Golf Report West,” and, later, www.golfconstructionnews.com when it went online and I covered golf development in all 50 U.S. states.

One day, out of the blue, I received an envelope from Bunny. It contained a $50 bill and a note that read: “Jeff, thanks for all your hard work.” I called him up to say thanks. He answered in his stentorious voice that sounded like a foghorn on a ship navigating a fogged-in Columbia River, “Well, Jeff, you do good work.”

Bunny designed over a dozen golf courses in the Pacific Northwest. A mutual friend, Dan Hixson, designer of Silvies Valley Ranch’s acclaimed and reversible 18-hole course in eastern Oregon, had Mason as a mentor at Columbia Edgewater Country Club in Portland where Bunny was the director of golf and Dan the head pro. “Bunny never had formal drawings,” Hixson told me in 2018 of Mason’s approach to golf architecture. “He’d rough-draw 18 holes on a few pieces of paper in a couple of hours and then hand them to the builder. Baffled, I asked him, ‘Bunny, don’t you have a CAD system or plans that are a bit more detailed?’ Bunny replied, ‘Nope. I’ve done my job.’ “

Somehow, his system worked. One of Bunny’s designs was Skamania Lodge’s 18-hole course overlooking the Columbia River on the Washington side. During construction, he hired a shaper who was very difficult to work with. Though talented, the shaper often failed to show up on the job, never answered the phone, and acted like he was the boss. In other words, this guy was a real thorn in Bunny’s side.

But Bunny got even. He later took a job redesigning a course not far from Skamania. After the owner of that project repeatedly stiffed Mason on his payments, the developer asked Bunny if he knew someone who could finish construction. Bunny replied, “Sure, but pay me first.” After he finally got paid, Mason gave him the shaper’s phone number, saying, “You’ll really like this guy.”

In the early ‘90s as work was underway on Bunny’s private Awbrey Glen Golf Club in Bend, Ore., Bunny took several hours leading me around the site as he eagerly explained the nuances of every hole. We made the tour in my wife’s then-new, dark-green Ford Explorer. The property, like that found often in Central Oregon, was comprised of basalt – fine for golf turf but not for shiny new vehicles. After Bunny and I parted ways, I went to a local car wash and, following three thorough cleanings, managed to get most of that red grit off the rig’s interior and exterior.

Despite my best efforts, there was still some of that stuff in the Explorer when we traded it in a decade later. Though not everyone mentioned above didn’t leave such a tangible lasting impression like Bunny Mason, they were been forgotten.

Jeff Shelley has written and published nine books as well as numerous articles for print and online media over the past 30 years. The Seattle resident is the co-founder of the Northwest Golf Media Association and board president of First Green, an international, nonprofit program that provides environmental and STEM education outreach using golf courses as environmental learning labs.
jeff@fairgreenspublishing.com