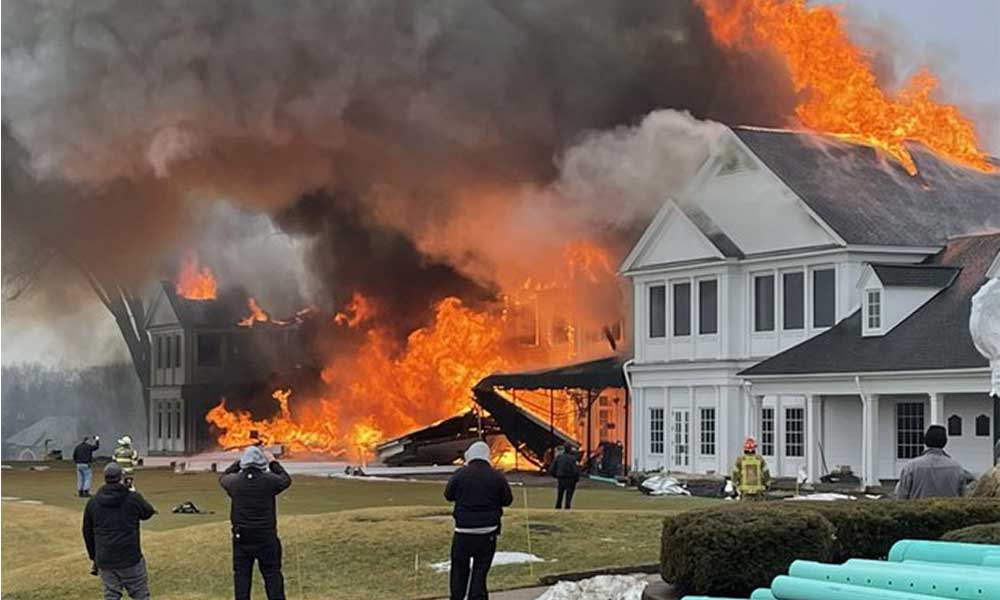 A massive blaze Thursday caused “extensive” damage to the Oakland Hills Country Club, complicating the future of an ornate and historic facility that has been host to major national golf championships.

People in the clubhouse alerted firefighters to the smell of smoke at 9:17 a.m., Bloomfield Township Fire Chief John LeRoy said. Firefighters used thermal imaging cameras and drilled inspection holes in the ceiling to find flames in the attic. It was difficult to find the cause of the smell in such a large building, LeRoy said. The clubhouse is 110,000 square feet.

The stately clubhouse was engulfed by mid-morning in a blaze of spectacular size. The fire lost some strength by mid-afternoon, but by 6:20 p.m. had grown again on the south end of the building crews remained on the scene through 11 p.m. and were expected to stay throughout the night, the township fire department said.

“It’s a tough, tough day,” said Rick Palmer, Oakland Hills club president. “It’s really a devastating day for Oakland Hills, for the golf community, for our members, for our staff. There’s so much history. But the blessings are, nobody was injured and everybody got out of the building.”

He described the back of the building as “not recoverable.”

Oakland Hills is over a century old and highly ranked in the golf industry and was poised to host major championships in the next decade.

The clubhouse also is a museum of sorts, displaying photos, paintings, trophies, and other artifacts from major tournaments over the years. A trophy case near the front entrance displayed replica trophies of tournaments won by the likes of Jack Nicklaus, Arnold Palmer, and Ben Hogan.

Palmer and LeRoy both praised firefighters for rescuing a significant number of artifacts in the clubhouse.

“We had some mutual aid crews that were instructed where the things were, since (the fire) was in the attic at the time,” LeRoy said. “They were able to get to locations they could get to quickly, pull that memorabilia out and hand it to the club members at the front door and go back in.”

It’s unclear how much was salvaged, and how much damage the clubhouse sustained. Firefighters were using aerial ladders to spray the clubhouse roof, and much of the afternoon smoke billowed south for miles.

The multi-story clubhouse featured a pro shop, dining halls, locker rooms, banquet facilities, meeting rooms, and many more amenities for the membership of about 750. Many of the members socialize there even when not golfing, including throughout the winter, and it was a popular venue for weddings and receptions.

LeRoy said he expected firefighters would continue fighting the blaze into Friday morning.

“We’re still pouring a tremendous amount of water on this,” he said. “At this point, we’re just going to be providing copious amounts of water to put it out as best we can and as safe as we can.”

A fire official who gave an evening briefing said the building was likely going to need to be rebuilt.

More than a half dozen departments assisted, including firefighters from Farmington Hills, Rochester Hills, Southfield and Franklin.

It will take days to determine the cause of the fire, LeRoy said.

There had been recent construction ongoing on a patio, members said. It’s unclear if that was related to the fire.

One of 14 original golf clubs

Oakland County Executive David Coulter said he was thankful no one had been hurt.

“The devastating fire at the historic Oakland Hills Country Club today is such a tragic loss for the 100-year-old home to golfing greats from Sam Snead and Ben Hogan to Jack Nicklaus and Arnold Palmer to Chi Chi Rodriguez and Tiger Woods,” Coulter tweeted Thursday, adding he is hoping for “a speedy recovery and rebuild.”

The golf world started to send condolences on the loss.

“Today, the Golf Association of Michigan was saddened by the news of the clubhouse fire at Oakland Hills Country Club,” said Chris Whitten, executive director and president of the Golf Association of Michigan. “Oakland Hills is one of 14 original clubs that founded the GAM in 1919, so our relationship and history is significant. The club is a true supporter of the game at all levels, professional and amateur.

“The iconic clubhouse itself is a treasure and contains some of the most significant golf memorabilia anywhere in the world from historic championships and legendary competitors.

“Golfers everywhere, especially in Michigan, send our best wishes to Oakland Hills for a speedy and important restoration.”

“Our thoughts are with our friends at Oakland Hills,” John Bodenhamer, chief championships officer for the USGA, which has hosted 10 majors at Oakland Hills, said in a statement to The News. “We have been in touch with their staff and, most importantly, are relieved to hear that no one was injured.

“Along with so many others in the golf community, we have special memories at this storied venue and look forward to making more in the coming years. We will support the club wherever possible in this rebuilding process.”

Nicklaus, the legendary golfer who won the 1991 U.S. Senior Open at Oakland Hills, said “the clubhouse is as much a part of the story as the golf itself.”

“Oakland Hills is one of those iconic golf clubs in America,” Nicklaus said in a statement to The News. “I was fortunate in recent years to visit Oakland Hills several times, and each opportunity to return to that clubhouse reminded me of their storied history and legacy. It is a sad day for the membership, but also for the countless people, like me, who respect and appreciate Oakland Hills.

“They will be able to rebuild the clubhouse, but it will be difficult to replace the many memories lost today.”

Oakland Hills, which has 36 holes including the most-famous South Course, opened in 1916, with the first rendition of the current clubhouse opening in 1922. There have been significant renovations to the white, stately, pillared clubhouse throughout the years, including the most recent, in 1999, at a cost of $16.25 million.

It has hosted six U.S. Opens, three PGA Championships and a Ryder Cup, among other major events.

The club’s South Course recently underwent a significant restoration, costing more than $12 million, in hopes of landing future big championships. The restoration, in part, removed dozens of trees, which allowed golfers to view the clubhouse from almost any point on the golf course. Members lauded the views during the reopening last summer and were mourning the views Thursday.

Former Assistant Golf Course Superintendent Ethan Haveman had this to say about the successful teamwork at this course.

Ron Dwyer of Troy was visiting his father who lives near the club and drove down Oakhills Drive on the club’s west border for a closer look at the still-blazing fire.

“I grew up in the township on the other side of the course and visited it several times, holiday luncheons, tournaments like the Ryder Cup,” Dwyer said. “It’s a beautiful place, lots of history.”

It last hosted a professional major in 2008, with the PGA Championship. It hosted the U.S. Amateur in 2016.

Costs for membership at the club include $8,400-plus per year in fees and dues, and there are food and beverage minimum charges of up to another $1,000 per year, according to membership documents. An initiation fee of $72,000 is due in some cases.