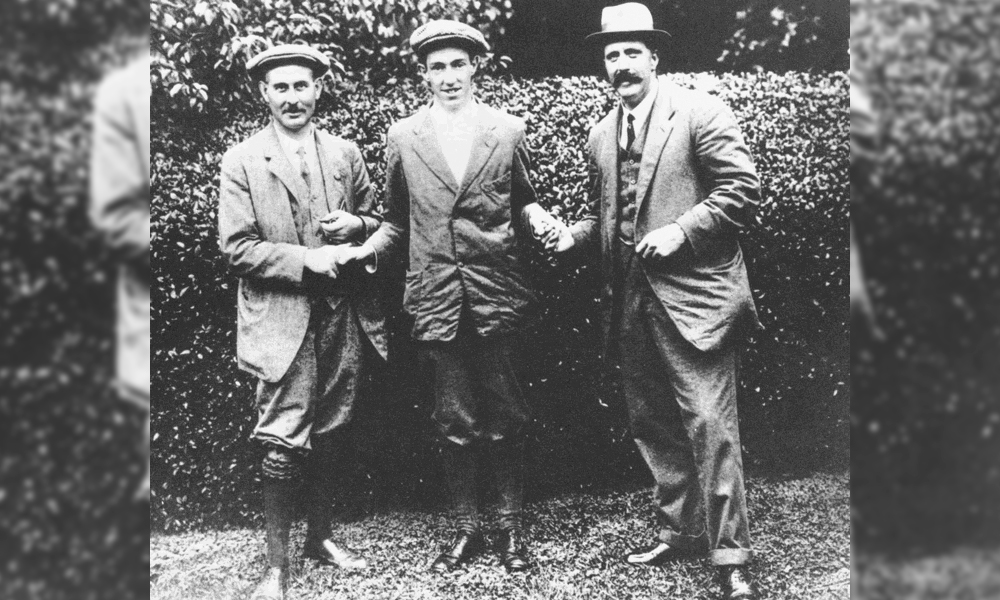 Editor’s Note: This is a second in a series of articles about the people who helped pioneer, promulgate and popularize the game of golf.

Francis Ouimet likely goes down as one of history’s most unlikely pioneers in any field, particularly one in a sport that, before he came along, was the domain of the wealthy. Born in 1893 in Brookline, Mass., Ouimet was the working-class product of a French-Canadian father, Arthur Ouimet, and an Irish mother, Mary Ellen Burke. (Arthur’s first wife, Mary Mahoney, died during childbirth; their son, Joseph, passed 10 weeks later.)

Arthur and Mary bore four children over an eight-year period; Francis was their second. As the brood grew up in their two-story house directly across from The Country Club in Brookline, Arthur made sure his offspring contributed to the family coffers. So eldest son Wilfred went to work as a caddie at the golf course on the opposite side of Clyde Street. 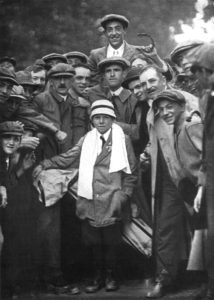 From his bedroom window, Francis had a birds-eye view of The Country Club’s 17th fairway. The youngster was immediately smitten by the scene. His mother would often find 4-year-old Francis standing across the road, staring at the golfers passing by. He found the game mesmerizing.

As Mark Frost noted in his wonderful 2002 book, The Greatest Game Ever Played: Harry Vardon, Francis Ouimet, and the Birth of Modern Golf

: “His family’s earliest recollections of the boy would be right at home in a nineteenth-century tall tale, befitting the kind of legends told about Mike Fink or Paul Bunyan; he walked around the house crying for his brother Wilfred’s first golf club.”

Thus set sail the realization of a quintessential American dream: A caddie qualifies for the final match of the 1913 U.S. Open and then beats the finest players of his generation. Not only that, but Ouimet’s victory transformed golf from what had heretofore been an exclusive, somewhat obscure diversion for rich men into a game for the masses.

The Ouimet boys were so taken with golf that they fashioned three makeshift holes in their backyard. Sunken tomato cans were the cups. At 11, Francis joined Wilfred as a caddie at The Country Club. It wasn’t long before Francis began excelling in caddie competitions, using his brother’s clubs and balls he found during loops. He soon transferred those skills to bigger stages, becoming the best prep player in Massachusetts.

When he was a junior, Francis’s taskmaster father insisted that he drop out of high school and do “something useful.” So Francis went to work as a salesclerk at the Wright & Ditson sporting goods store, which was co-owned by future Baseball Hall of Famer, George Wright. Wright imported and sold golf clubs, eventually developing his own line of equipment, and helped introduce golf to Massachusetts’ public players with a rudimentary course at Franklin Park. He later donated 156 acres for the construction of Boston’s second municipal course (a Donald Ross design named George Wright Golf Course).

Wright was made aware of his employee’s prowess on the links, and as an elite athlete, recognized the pitfalls and potential disappointment lurking for a teenager approaching adulthood. So after Ouimet made it to the finals of the Massachusetts State Amateur – and lost, Wright sat his young protégé down for a heart-to-heart chat that led Francis to formulate a tournament strategy for 1913.

Interestingly, Ouimet experienced an “aha” moment at this time after attending a Verdi opera with his mother. He was amazed at the rapturous performance given by a young female soprano, who invested herself so completely to an area that she seemed to fall into a trance.

After seeing this heightened level of commitment, Francis said to himself: “That is just what I want from golf.”

Now fully dedicated, Ouimet began to shine, winning the 1913 Massachusetts Am at Wollaston Golf Club by a resounding 10-and-9 margin over Frank Hoyt. After losing in the quarterfinals of the 2013 U.S. Amateur at Garden City Golf Club on Long Island, Ouimet was asked by the president of USGA, Robert Watson, if he wanted to play in the 1913 U.S. Open, which had been postponed from its usual June date to mid-September to accommodate two of golf’s most famous players, Britons Harry Vardon and Ted Ray.

The U.S. Open that year was being played at a course the 20-year-old Ouimet knew quite well, The Country Club, so he accepted the offer.

For the Open, Ouimet hired pint-sized, 10-year-old Eddie Lowery as his caddie. Francis knew Eddie and his brother Jack from his home course of Woodland. Jack, two years older than Eddie, was Francis’s first choice to work the Open. But Jack got into trouble with his mother, and Eddie, disobeying her instructions, showed up at The Country Club to take the bag for Tuesday qualifying.

Vardon and Ray were definitely the headliners at the U.S. Open, and rightly so. Vardon was simply the best golfer of his generation, and one of the finest ever. The Jersey native won an all-time-best six Open Championships. He was part of the “Great Triumvirate” of five-time Claret Jug winners James Braid and J.H. Taylor, which dominated golf from the mid-1890s to the mid-1910s.

Ray was no slouch either. Also a Jersey native, the stocky Ray was a powerful player known for his recovery skills. He won the 1912 Open Championship and later captured the 1920 U.S. Open.

As the 1913 U.S. Open got underway, the galleries surged thanks to widespread newspaper coverage of rising amateur Ouimet competing on the same golf course as the renowned professionals, Vardon and Ray.

Ouimet made it through qualifying, and then in the 72-hole championship – with 36 holes played both Thursday and Friday, ended up tied atop the leaderboard with Vardon and Ray at 12-over-par 304. The trio would decide the title in an 18-hole playoff on Saturday. 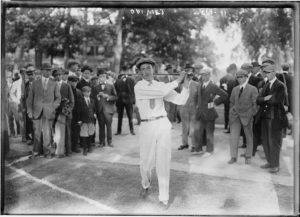 Throughout the tournament, Eddie Lowery provided confidence boosts to Ouimet, who’d never competed at such a high level. “Francis, you just got to beat these fellas,” Eddie told Francis, as quoted from Frost’s book. “You know you’re the last American left . . . We should just walk up to those other fellas and ask ‘em when their boat sails for England. They might as well begin to pack.”

“Whatever happens today, Eddie, win or lose,” Francis replied, “when it’s all said and done, I give you my solemn word the one thing they will not be able to say is that my tying them for this championship was a fluke.”

Thus emboldened, Ouimet went out and fired a 1-under 72 – with a birdie on his beloved 17th hole, while Vardon finished second after carding a 77 and Ray a 78. Ouimet is one of just eight amateurs to win the U.S. Open.

The victory at The Country Club was met with roaring approval by the thousands of partisans in attendance who had witnessed one of the biggest upsets in sports history, a distinction that’s observed over a century later.

Both Vardon and Ray were classy in defeat. “I have no hesitation in saying that [Ouimet] played better golf the whole four days than any of us. This was the best golf I have ever seen in my time in America. It has been an honor to play with him and no dishonor to lose to him.”
Ouimet’s victory sent shockwaves around the globe and, most importantly, inside the world of golf, especially in his home country. A sport perceived as only for the elite suddenly became accessible to anyone. Ouimet’s 1913 Open victory is generally regarded as the catalyst for the tremendous surge in the game’s popularity across the U.S. over the next 17 years.

At the time of his win, there were an estimated 350,000 American golfers. Ten years later, that number had risen to 2 million, fueling the notion that Ouimet was the “Father of American Golf.”

It also launched the “Golden Age” of American golf architecture. The number of courses in the United States grew from fewer than 750 to nearly 6,000 by 1930. And the quality of the layouts vastly improved, as seminal architects such as Charles Blair Macdonald (often called the father of American golf architecture), Alister MacKenzie, H.S. Colt, Seth Raynor, George C. Thomas, Willie Watson and Ross crafted some of their finest work at dozens of private and, most importantly to the game’s growth, public courses.

The 1913 U.S. Open was among the 17 significant career titles Ouimet won, including two U.S. Amateurs. Ouimet remained an amateur throughout his playing days, and his devotion to the game stayed keen. He became the first American to be named Captain of the Royal & Ancient Golf Club of St. Andrews in 1951, and two years later was the first-ever winner of the USGA’s Bob Jones Award. He has a room named after him in the USGA Museum in Far Hills, N.J.
In 1949, the Francis Ouimet Scholarship Fund was established in his honor. To this day, Ouimet Scholars are selected among young people who work as caddies at clubs throughout Massachusetts. It’s now the second-largest such fund (after the Evans Scholarship). Since its inception, over 5,100 students have received more than $26 million in college-tuition assistance.

Ouimet also sustained a lifelong fascination for The Country Club, which hosted the U.S. Open in 1963 on the 50th anniversary of his historic win.

In 1932, Ouimet had this observation about the golf course across Clyde Street from his childhood home: “To me, the ground here is hallowed. The grass grows greener, the trees bloom better; there is even warmth to the rocks. Somehow or other the sun seems to shine brighter on The Country Club than any other place that I have ever known.”