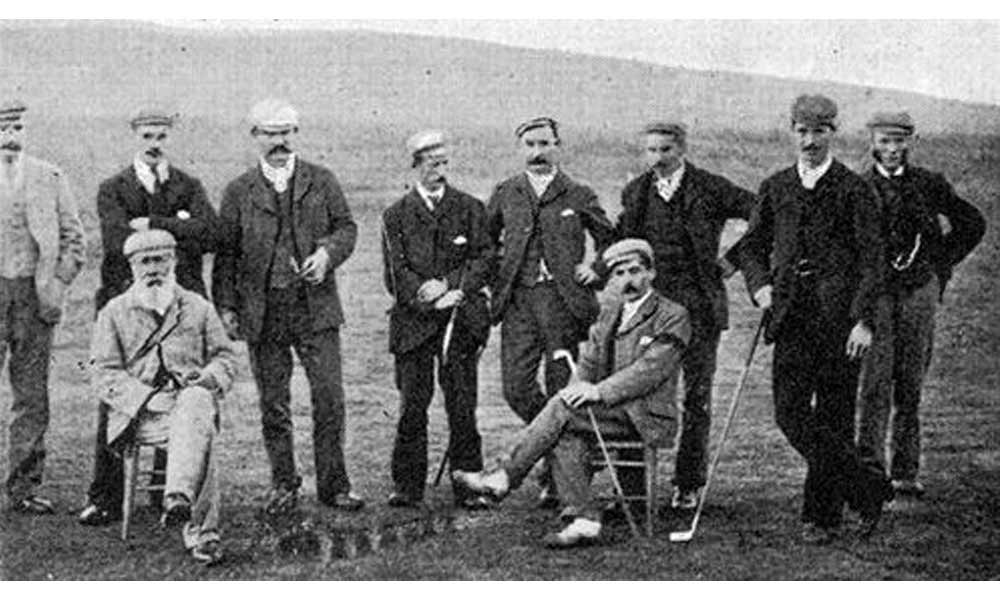 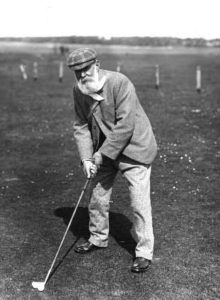 The first person who helped advance golf out of obscurity was unquestionably Old Tom Morris, who was born in 1821 as Thomas Mitchell Morris in St. Andrews, Scotland,

Morris was like many other lads in the “Old Toon,” swatting around rough-hewn spheroids (actually wine-bottle corks held together by nails) in the streets of the city that, with much thanks to him, is known as the “Birthplace of Golf.” In 1835, at the ripe age of 14, Morris began working as an apprentice at the Old Course under the tutelage of Allan Robertson, widely considered golf’s first head professional.

Noting his acolyte’s innate skill as a golfer, Robertson teamed up with the teenager to win many matches against moneyed “gentlemen.” The duo enjoyed a lucrative partnership.

During this time in their relationship, Robertson upgraded the Old Course, including the expansion of its small, original greens. Robertson went on to design the first 10 holes at Carnoustie Links in 1842 with assistance from a 21-year-old Morris. 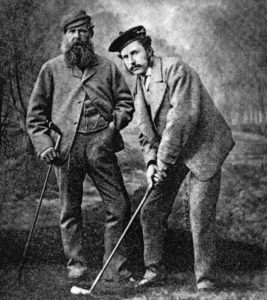 Morris became an accomplished player, winning the Open Championship in 1861, 1862, 1864 and 1867. He’s still the oldest winner of the Claret Jug, at age 46, while his son – also named Tom – remains the youngest ever to receive the cherished “Champion Golfer of the Year” moniker.

(The senior Morris was dubbed “Old Tom” to differentiate him from his precocious son. Thomas Morris, Jr. was born in 1851. “Young Tom” won four straight Open Championship titles – his first at the tender age of 17, before he passed away, at 24 years old in 1875, after his wife and newborn baby died during childbirth. Young Tom’s official cause of death was pulmonary hemorrhage that caused apnea. But observers believed he was heartbroken from the tragic loss of his young family. The Morris’s father-son relationship was immortalized in Kevin Cook’s award-winning 2007 book, Tommy’s Honor.)

When Old Tom switched to using a gutta-percha ball in golf competitions, Robertson fired him. Robertson had a profitable business making “featheries,” which would soon slip into obsolescence due to the much harder and longer-flying, rubber-like “guttie.” So Morris moved to Prestwick in South Ayrshire, Scotland, where he became that nascent club’s “Keeper of the Green, Ball and Club Maker” from 1851 to 1864.

Old Tom was instrumental in spawning the Open Championship, originally held at Prestwick in 1860 and won by Willie Park, Sr. The world’s first official golf tournament was played over the next 11 years at the Prestwick links. (It must be noted that the Morrises, who each won their four titles at the quirky Prestwick layout, likely had a distinct home-field advantage.)

As accomplished as he was as a competitor, Morris made perhaps his longest-lasting impact in the game as a clubmaker, greenkeeper and golf course architect. He designed the original 12-hole Prestwick course (six holes of which are still in play), making it among only two dozen golf clubs in the world when it was established in 1851. Morris extended the layout to 18 holes in 1882. 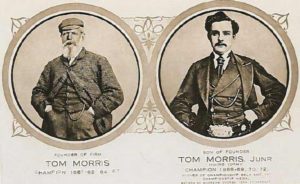 In addition to his work with Robertson on Carnoustie’s Championship Course, Old Tom designed or remodeled approximately 60 courses in the UK. His knack for routing holes over, around and through natural landforms – while factoring in wind directions, scenic vistas and challenge for all types of golfers – was seminal. He influenced such latter-day architects as Alister MacKenzie, Donald Ross, Donald Steel, Tom Doak, Martin Hawtree, among many others.

Old Tom pioneered strategic design, giving golfers options instead of the prevailing penal approach (which forced players to carry obstacles or be penalized). A few of Morris’s signature architectural features that have since been duplicated on layouts worldwide include Dornoch’s plateau, inverted-saucer greens; the Old Course’s broad fairways and greens revisions; his artistry at making Royal County Down one of the world’s top courses; risk-reward tee shots; the Klondyke and Dell holes at Lahinch; the Cape hole at Royal North Devon; the “Alps” at Prestwick; and the “spectacular” golf hole, which remains on glorious display at Cruden Bay near Aberdeen.

In his book, The Spirit of St. Andrews, MacKenzie wrote of Morris: “The course [Machrihanish, later fine-tuned by MacKenzie] was planned by Old Tom Morris … Old Tom was thoroughly steeped in the traditions and spirit of the game. He was a sportsman in the best sense of the word … No professional since his time has ever grasped the real sporting spirit of golf course architecture like he did.” 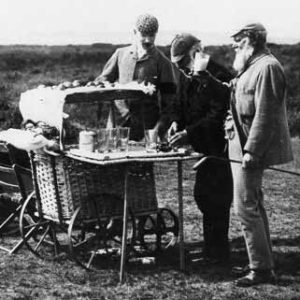 After leaving Prestwick, the multi-tasking Old Tom tended the Old Course for over 40 years, up until his death. He’s considered the “grandfather” of modern greenkeeping, introducing yardage markers and the concept of top-dressing greens with sand. Understanding that heavy foot traffic was detrimental to putting surfaces, Morris found that top-dressing significantly enhanced plant health and growth. The practice remains a staple of turf-tenders today. Morris maintained hazards (before his time, bunkers were left untouched and unraked), and was the first to use a push mower to cut greens.

Thanks to his involvement in furthering Scotland’s favorite sport and the “Royal & Ancient Game,” Old Tom became an icon in his home country. He died in 1908 at the age of 87, after falling down a flight of stairs and hitting his head en route to the clubhouse loo in the New Golf Club at St. Andrews.

His funeral procession in St. Andrews extended the entire length of South Street, from the port to the cathedral. It was described by Scottish professional Andrew Kirkaldy as “a cloud of people.” As Kirkaldy noted, “There were many wet eyes among us, for Old Tom was beloved by everybody.” 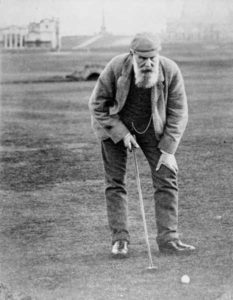 Cook wrote eloquently in Tommy’s Honor of this sudden end to golf’s original pioneer: “It was mercifully quick. He cracked his skull at the bottom of the stairs and never woke up. But perhaps Tom had time for a last blink of thought. An 86-year-old man falling in the dark, he might have seen the links in the late-day sun that casts shadows over every bump and makes the land look like water. He might have seen his son again, a brave boy knocking in a putt to beat his Da and then flinging his putter straight up.”

Old Tom is buried at St. Andrews Cathedral next to a much more prominent monument to his son. The two gravesites draw thousands of golfers annually who pay homage.

Morris’s legacy in golf is assured for centuries to come. The Golf Course Superintendents Association of America presents its Old Tom Morris Award to an individual who, “through a continuing lifetime commitment to the game of golf, has helped to mold the welfare of the game in a manner and style exemplified by Old Tom Morris.”

Boston Public Golf is the Nation’s Gold Standard
How Healthy is Your Turf?
To Top