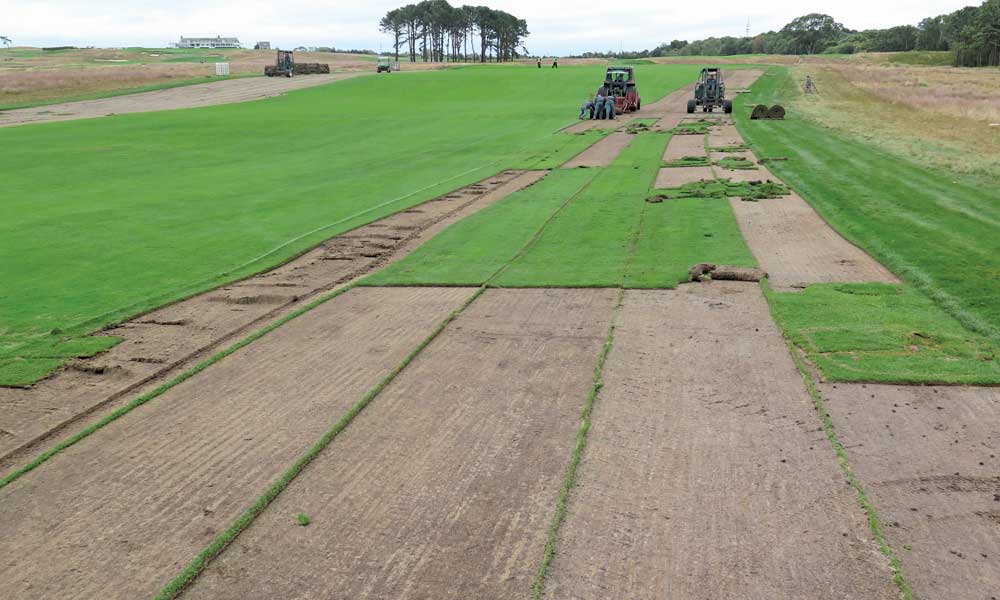 To both the USGA and host club Shinnecock Hills, this year’s U.S. Open is not just a national championship, it’s a chance for much-needed redemption, an opportunity to wash away the stain of one of the most mortifying and avoidable controversies in golf history. Happily, USGA brass, Head Superintendent Jon Jennings, and the members of Shinnecock are taking every step necessary to ensure that at this year’s Open, the golf course will be the star for all the right reasons.

It’s impossible to overstate what a colossal blunder was committed setting up the course over the weekend of the 2004 tournament, the last time the Open was at Shinnecock. Back then we always got complaints about the set-up – – but this time they were right. Presumably chagrined that 11 players were under par after the first two rounds, the USGA – who had the often self-indulgent Tom Meeks at the helm of tournament set-up – let the golf course get away from them. 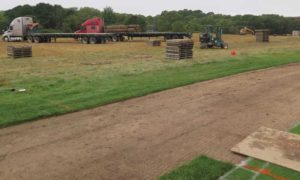 “Get away from them? They burned it down!” raged sports broadcaster Steve Czaban at the time, and he was right. A combination of not enough water, windy conditions, and over-cutting/over-rolling greens made some hole locations not just unfair, but unplayable, even ones USGA brass called “the most benign” they could find.

Rub of the green is one thing – the occasional bad bounce is the price you pay when you take up golf – but in 2004, well-executed shots were being penalized far too often, because someone – most say, Tom Meeks – decided to cut and/or roll greens despite being warned against it. As a result, the scoring average on that following Sunday soared to an astronomical 78.7.

Ground zero for the imbroglio was the short, but deadly par-3 seventh hole – a mere 189 yards, with no out-of-bounds or water hazard, but nevertheless the fourth hardest hole on the course, playing to a bloated .65 strokes over par. The hole was so hard, so baked, so unplayable, that players with two-foot putts were putting off the green and into bunkers 50 feet away. It was a joke. So the USGA watered that green after every group played through…and every second was captured on international TV.
“It was a great deal embarrassing,” former USGA executive director Frank Hannigan would say after the tournament. “It was not what we intended, we went over the edge.”

Whether the USGA likes it or not, the ghost of 2004 will flit around the 2018 U.S. Open unless and until this year’s championship comes off without a hitch. This time, they have both the right guys for the job and the right attitude.

“We learned from that,” declared Jeff Hall, USGA Managing Director for Rules and Open Championships. “First, we learned to communicate better with the host club. We have daily meetings with the super, Jon Jennings so that we and the club are always on the same page.” 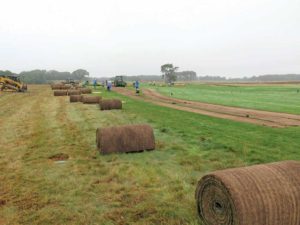 Good call: Jennings is a terrific man to have walking point – for both Shinnecock and the USGA. He’s well versed in Golden Age golf architecture; before coming over to Shinnecock (a William Flynn design) he spent 2000-2012 as head super at venerable Chicago Golf Club, (a Charles Blair Macdonald Course), and he also worked for a time at Onondaga Country Club, (a Walter Travis design). He’s a lifer in the business, having started his career in high school on the grounds crew of Madison Country Club in Connecticut and graduated from the prominent turfgrass management program at UMass.

“I remember laughing out loud when the fellow who hired me at Madison CC, Mike Chrzanowski, said he went there,” chuckled Jennings. “He asked me what was so funny and I told him I didn’t know you had to go to school to learn how to grow grass!”
Best of all, Jennings already has significant USGA tournament experience having been head super when the 2005 Walker Cup was contested at Chicago Golf Club. He also has PGA Tour experience as the head super at En-Joie Golf Course in Binghamton, a former site of the B.C. Open.

“He was terrific at the ’05 Walker Cup, tremendously detail-oriented,” praised a visibly impressed Hall. “He’ll get his hands dirty.”

Golf is lucky to have gotten Jennings at all, actually. He was…indeed, still is…a phenomenal, multi-sport athlete. He played football and lacrosse in high school, rugby in college, (you know how crazy rugby players are!), and still to this day can run a half marathon in 90 minutes or ski the double black diamond runs at Whiteface and Waterville Valley faster than kids less than half his age. As we go to press, he just finished a half marathon in New York City in a blazing 1:38, and accepted Your Author’s challenge of running the Sleepy Hollow Half Marathon next spring. That run features 1,657 feet of elevation change with a net uphill gain of over 300 feet: hills for breakfast, as runners say.

Proving once again that running is a microcosm for life, Jennings takes the same “run towards the tough hill” attitude when it comes to USGA projects. How do you get Shinnecock Hills, a strategic course with wide fairways, ready to host a U.S. Open? And how do you keep the character of the wonderful par-3 seventh without reprising the carnival barker weirdness of 2004?

“The club underwent a restoration project after 2004, and the course is much different than what you saw at that tournament. They restored it in the vision of Flynn: much wider, much more strategic,” explained Hall, referring to the wildly successful Bill Coore and Ben Crenshaw work that made the course look and play like when Flynn designed it in the late 1800s. “There is some additional yardage – just under 450 yards, to bring it to current 7,445. It was 6,996 in 2004.

“We’re not narrowing Shinnecock a whole lot. We did, this fall, make some changes compared to what the restoration had done, but even so, this will be the widest U.S. Open we’ve ever played. In ‘04 the fairways were 26-28 yard range. Now we have widths that are all over the place – upper 30s, solidly in the 40s, sometimes even into 50 yard range.” 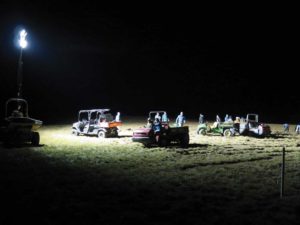 It’s a fascinating process they employed this time around. Rather than growing the rough, they removed fairway height turf within the section designated by the USGA and replaced it with fescue transplanted from the Short Course or with purchased fescue from a USGA sod farm. The old sod was rolled up and shipped to a center in New Jersey where it will continue to grow so it can be replaced around September of this year. (If you were in the right place at the right time, you might have seen the trucks with the sod going over the George Washington Bridge.)

The irrigation system had to be changed as a result, and required moving sprinklers and in many instances, changing them to smaller sprinklers that don’t throw water as far to prevent wet areas from forming on the new turf.

“What’s been achieved is the proper balance between what Flynn wanted, with what we need to do to have a difficult, but fair Open Championship. True to the course and Flynn – but accuracy is still being tested,” Hall concluded.

Then there’s seven and its diabolical green.

“If you analyze ’04, it had less to do with green speed than it did with water management. We learned from that too,” Hall admitted candidly. “Now we have tools we have available to us we didn’t have then. We have new tech a Trufirm meter which measures the firmness of greens. We have new moisture probes that weren’t available ’04. We can now measure such details as wind moisture and dew points so we can make informed decisions, and we have on-site meteorologists to help us also.”

Even with all that, the USGA is still taking the precaution of growing a collar of rough between the green and the bunkers – just enough to catch a ball gently trundling down the hill, but not stop a truly bad shot.

“We don’t want to see balls funneling off the green into the front bunkers, so we put in a buffer of fescue rough….if a ball has some pace on it – if it’s a bad shot – it will still go in that bunker, and that’s the way it should be. A bad shot should go into the bunker, but a good one should not,” Hall concluded.

The proof of the pudding, however, is in the tasting and happily, not one but two members of Shinnecock rotate in and out of Your Author’s regular weekend foursome. (It’s a good A-party list.) Each of these men can recall over five decades the club’s history and events as easily as they remember their wives’ names. One, who wishes to be known only as “Charles MacRaynor,” likes some changes, disagrees with others, but is generally optimistic.

“I’m just a concerned member, an architectural purist, and a William Flynn disciple,” he explains. “I think at seven, they are playing into the whims of the players. That green is supposed to be tough, that’s what makes the hole so beautiful. “Good” – not “perfect” but “good” – shots don’t always have to be rewarded. That’s links golf, and Shinnecock at its best is set up to play like one; that’s the intent all along. They are taking a lot of the links experience out on seven, and making it more like a Tour course. These players think they have a God-given right that if they hit a pretty good shot there, it has to stop on the green…well not on a links course they don’t. Sometimes the best golfer is the one who deals with setbacks the best.”

I almost wanted to shout “Dad-gum Whippersnappers!” after that epic rant, but MacRaynor wasn’t done.

“Regarding the rest of the changes – talk about artificial! It used to be a two-year period of grown-in on fairways to narrow them. This is instant change! It’s McRough! They’re just rolling out these strips that should grow in and look natural, but they basically astro-turfed it! I hope Gil Hanse has a conniption on the air over this!” he raged.

Then, after I stopped laughing, he took a deep breath and calmed down.

“It’ll be a great Open, everyone will be proud. Jennings is terrific – both for giving the USGA what they want for the tournament, but also making the course play for us like Flynn wanted it to. He was just as essential to the renovation being such a success,” he said. “Let’s just hope they don’t decide to keep it like the Open throughout the year. You watch – a couple five hour rounds and that sod will be back from New Jersey real quick.”

With Jennings at the helm, everyone can sleep more easily. He gets Flynn and he gets classic design. Jennings will make sure the course is the star – as it should be at a U.S. Open. At a truly great U.S. Open, the course always wins.

“The first time you go and see real Golden Age architecture, it jumps out at you – the lines, the angles, and the way the puzzle pieces are put together,” Jennings recalled. “Once you get a taste for it, it never leaves you.”