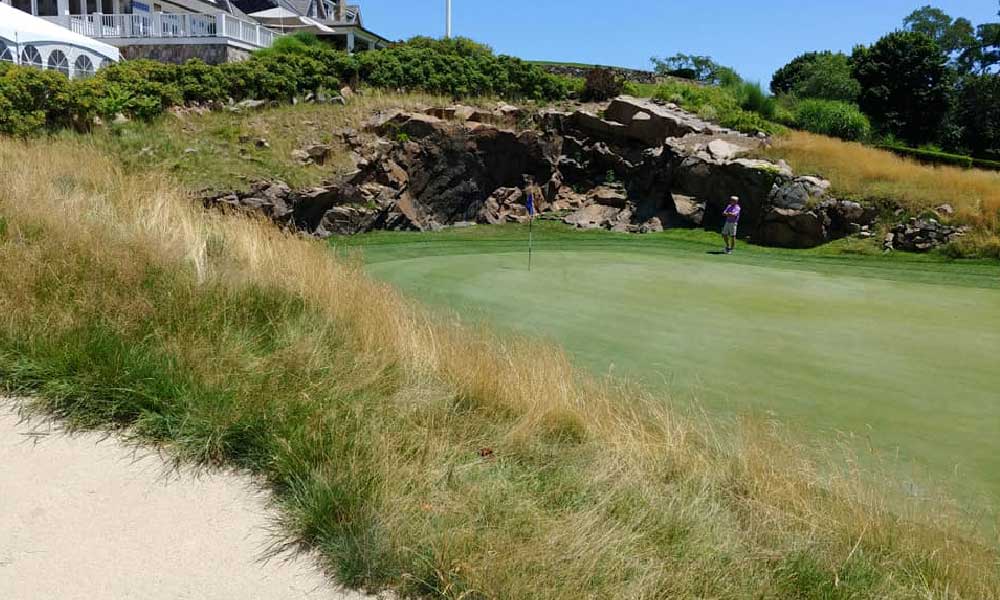 [Author’s Note: Last month we published a historical fiction account of the sinking of the cargo ship Tedesco off the shore of Swampscott, Massachusetts and the subsequent naming of Tedesco Country Club years later. This month, we’ll meet golf architect Ron Forse and Tedesco Head Superintendent Peter Hasak, who spearheaded and executed a wildly successful renovation of Tedesco Country Club, bringing back Golden Age strategies and features lost over many intervening decades.]

She was an opera singer named Fortunata. The ship named after her was not so lucky. The golf course that bears both their names, however, lives on over a century and a half later.

It was the effervescent voice of Spanish songstress Fortunata Tedesco that entranced the owners of a newly-built, trans-Atlantic cargo ship so fervently that they named the craft after her. Sadly, the bark Tedesco sank in 1857, just ten years after her maiden voyage, but the name lives on at Tedesco Country Club, a venerable and charming golf club and a jewel of scenic, quaint Marblehead, Massachusetts. Now after a recent renovation by golf architect Ron Forse, Tedesco is enjoying a remarkable renaissance that’s turned the heads of not only every golfer in New England but many of the golf design and travel cognoscenti as well.

“When I got to Tedesco in 2016, I saw a golf course that had excellent Golden Age features that had become blurred over time,” explained Forse, whose master plan included elements of both renovation and restoration. “I also found a course that had two completely different landscapes.”

It was an interesting puzzle for Forse to solve. First, Tedesco is bisected by Salem Road, and the two distinct topographies could not be more radically different. On the clubhouse side of Salem Road, laid out over gently rolling former farmland, are holes 1-5, 8-10, and 18. Across the road, however, Tedesco becomes a mountain golf course, with holes ascending, descending, and spiraling around the mountain’s forested slopes and playing through idyllic alpine glades.

Second, since opening, many hands played a role in the course’s design. Though the club dates back to 1903, it moved locations and endured various land swaps in its long history. Tedesco’s front nine is accredited to several members but also incorporates design work by Wayne Stiles and John Van Kleek, a well-respected architectural tandem of regional success in the northeast. The back nine started as Stiles and Van Kleek, but saw many changes over the years, including the 12th tee, a contribution of Donald Ross in the late 1920s. So it begged the question many Golden Age clubs faced: What should they restore? To what architectural direction should they commit?

“We needed to put a stamp, a mark on the project, and we wanted Golden Age in terms of look and playability,” explained Tedesco Head Superintendent Peter Hasak, who has been with the club for thirty-one years. They also needed to make the entire golf course feel like a unified whole.

“What really helped us at Tedesco was that they had a fantastic set of eye-level photos of the course as it existed in the mid-1920s, and those ground-level photos revealed some of the most gorgeous and strategic natural bunkers I’d ever seen anywhere,” Forse recalled. “I loved the fescue eyebrows above the flashed sand.”

“Tedesco had the best photo documentation of any course I’ve seen in the Boston area,” Forse added. That’s a bold statement as Forse is also working at Hyannisport, Brae Burn, Salem, and Country Club, along with at least a half dozen more projects throughout New England. That’s veritable Who’s Who of Massachusetts Golf.

Those photos not only guided the bunkering project, but the treeless landscape they showed helped initiate a strong tree-clearing program to bring back a long vista across the property on the clubhouse side of Salem Road. It also identified holes where Forse could widen fairways, even in tight corridors like 11 and 14, the narrower, more dictatorial part of the golf course. Forse also brought greens back to full size And of course, the greens roll absolutely perfectly, a tribute to the excellent stewardship and agronomy of Peter Hasak.

“The goal was to let the course architecture shine through, and that was Forse’s greatest success at Tedesco. He not only brought back the most interesting strategic features, but he also made the entire course feel and play like a contiguous whole,” said Hasak.

In a way, Tedesco’s dual personality – part rolling farmland, part mountain – actually helps in that regard. The course features a memorable asymmetric routing that features five par-3s and three par-5s. The par 34-36=70 course includes a stretch that goes 3-3-5-5 from holes 7-10. You finish with five par-4s in a row, but none of them feel monotonous, even though in the spring and in the fall, you’ll play much of them into the teeth of a stern prevailing east wind. And the change of scenery back and forth from farmland to mountain top is both memorable and interesting. Few courses can make such duality work, but at Tedesco, there’s a charming warmth to it.

By the time you crest the hill on 16 over which you’ve hit you’ve already been enchanted by the course’s wondrous variety – uphill, downhill, draw, fade, water, wetlands, woods – but once the majesty of the 16th green complex unveils itself before your eyes, you might never want to descend back to the real world. A long iron approach plays dramatically downhill to a green surrounded by geometric bunkers and framed by ancient granite boulders.

“I could play this little circuit of 12-16 over and over again for days,” said a thoroughly mesmerized Mike Mosely as his approach shot bounced off the granite rocks well to the right of the green. “I don’t even care what I shoot, this course is so cool.” (It was 106, but who’s counting…)

The other hole that belongs in any discussion of the greatest in the country is the glorious par-4 second. In an unusual bit of routing, the course returns to the clubhouse at the second hole as well as the ninth and 18th. The clubhouse sits atop a rocky cave, a grotto that actually houses the entire second green. Long approach shots on this long par-4 can ricochet off the back of the wall and bounce back next to the pin, or they can drop straight down and the player has no shot even though he is on the green. But either way, it’s both unique and dramatic.

Better still, (But wait! There’s more!), the hole also features a diagonal angle of attack off the tee, a fairway canted to the right, and a deep, dangerous fairway bunker guarding the corner.

“That’s one of Forse’s 24 new bunkers, and it seems a lot of play,” Hasak noted. “In fact, one of his greatest accomplishments was that the bunkers were all repositioned so they’d catch drives. There is no more free-wheeling around this golf course, you have to think from shot to shot.”

To measure the success of any golf course you look at how the course plays, not just how the course looks. The greatest success at Tedesco is that the strategies have returned off the tee, and the greens are extended back to their full size, but also the turf is as fast and firm as courses this close to the sea should be, and the curvaceous greens roll as true you could ever wish.

“Peter the super has been there for decades, and his enthusiasm for the place has always been superlative. It’s infectious, and it makes everyone around him better. It’s a joy to work with him,” Forse recalled gratefully, echoing the sentiments of the entire staff, from former Head PGA Head Professional Bob Green right on down, and they’re right. Hasak is a lifer in the golf industry; he started as a kid and devoted his life to golf. He caddied and worked for grounds crew in Fairfield, Connecticut in his teens. After graduating from UMass’ superlative turf management program he spent nine years working at first Amherst Golf Club, then Hickory Ridge Golf Club in South Amherst.

But since 1988, he’s been at Tedesco, and those three decades of experience were a wealth of knowledge to Forse, and the symbiosis between the two during construction was palpable.

“I love Forse!” Hasak beamed energetically. “His knowledge of golf history shines through, but he also has an artistic flair, one steeped in Golden Age strategy and design.”

Once again, Tedesco has too. Run, don’t walk, because this one is a rising star.