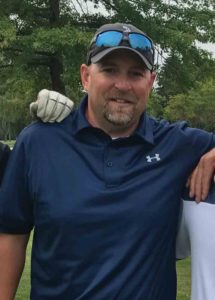 Golf Course Superintendent Anthony Chapman is much like other residents of the Triple Cities of Binghamton, Johnson City, and Endicott, New York. He is proud of his beautiful hometown, proud of the Endicott football team and immensely proud of the nearby En-Joie Golf Club. Unlike other residents, however, Anthony carries the responsibility of the community’s picturesque 18-hole golf course, built on the rolling hills bordering the Susquehanna River, squarely on his shoulders.

He and his crew must ensure the playability of the course for some 27,000 rounds of golf enjoyed each year by area residents and regional tourists, along with maintaining tournament-level conditions for an annual PGA Champions Tour event. To make the task even more challenging, the course’s scenic locale is, from time to time, the site of horrendous flooding, the result of weather conditions that Anthony describes by saying, “There’s no real normal anymore.”

A Historic Course with a Prehistoric Twist

The En-Joie Golf Club was established in 1927 by George F. Johnson. In 1899, Johnson had transitioned from foreman to co-owner during the takeover of a shoe factory that eventually became the Endicott-Johnson Shoe Company. Johnson, widely known as George F, believed that keeping his 20,000 workers happy increased productivity and decreased the likelihood of unionization. Motivated by this philosophy, George F facilitated the construction of libraries, theaters, swimming pools, parks and stores and even offered a way for employees to build and finance homes.

History cites George F, a passionate golfer himself, as saying, “Some foolish workers got it in their heads that golf was only for the rich…golf is just as good for hard working shoemakers as it is for the tired businessman…the poor can play golf just as cheaply as going to the movies, and it’s better for their health. Give men comfort to live and play then you can work them hard, and they will be ready for more.”

The course’s original Ernie Smith design was flat and mostly treeless, and a round of golf cost shoe company employees a quarter. By intention, there was no rough, leaving little place to lose the golf balls Endicott-Johnson was manufacturing, in addition to its production of leather shoes.

Over the years, the En-Joie Golf Course was redesigned and enhanced, upgrading the facility so significantly that by 1971 it was a PGA Tour stop, hosting the Broome County Open. In 1972, the event was renamed the B.C. Open to honor Endicott resident and comic strip artist, Johnny Hart, who enthusiastically loaned his famous B.C. brand and his personal support to the tournament. With the warm hospitality of the community and Hart’s iconic cavemen and women characters, B.C., The Fat Broad, Thor, The Cute Chick, Grog and others used as part of the tournament’s marketing, the B.C. Open soon became a favorite event for both players and fans. 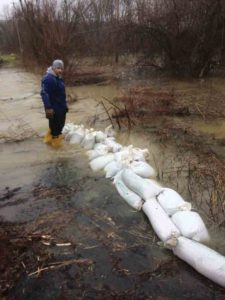 flooding of the Upper Susquehanna basin

Although 2006 was scheduled to be the final year of the B. C. Open, the culminating event was not played at En-Joie. Historic flooding of the Upper Susquehanna basin occurred in late June of that year, forcing tournament officials to relocate the event to Atunyote Golf Club at the Turning Stone Resort and Casino in Verona, N.Y. Despite the damages, by 2007, En-Joie Golf Club was again hosting a professional tournament and writing a new chapter in its history as the home of the Champion’s Tour Dick’s Sporting Goods Open.

Anthony, a 1993 graduate of Binghamton High School, originally studied Criminal Justice at Broome Community College before relocating in 1996 to Boynton Beach, Florida. As part of the Palm Beach County Parks Department, he soon transitioned to the city of Lantana’s 22-acre sports turf facility. Continually climbing the ladder as a municipal employee, Anthony concurrently expanded his knowledge of turfgrass. He became a member of the Florida Turfgrass Association, the Sports Turf Managers Association, earned certificates from Palm Beach Community College in both turf management and turfgrass science, and earned a certificate in turfgrass pest management from Purdue University. In 2005, Anthony was promoted to Director of the Lantana Parks and Recreation Department, where he oversaw the sports fields, building maintenance, marine safety, forestry and the community’s parks.

But 2007 took Anthony back to central New York. His wife Andrea pursued her doctoral, and he went to work for Superintendent Rocco Greco at En-Joie. Although he had missed the 2006 flood, he was up to his hip waders in 2011 when Tropical Storm Lee took the Susquehanna River to record levels and flooded sixteen of the eighteen holes at depths of 15 to 20 feet. To add insult to injury, a warm spring led to more flooding the following March.

“There was raw sewage running down the cart paths,” said Anthony. “We wore masks, we all got tetanus shots and we learned to deal with the smell of death. There were things swimming in the water you’d never seen before. It certainly didn’t look like a golf course. The only thing to do was just ban together and go after the clean-up, step by step.”

Remarkably, En-Joie Golf Club was in immaculate condition when the Champions Tour players teed up that summer to play the 2012 Dick’s Sporting Goods Open.

As Anthony explained, “We are extremely proud to have the Champions Tour coming to play here. From the minute we start work each spring, everything we do is directed toward preparing the course for that event. Although no one can sustain championship conditions every day, the efforts we make to prepare and protect the course for that tournament result in extremely nice playing conditions for daily play.” 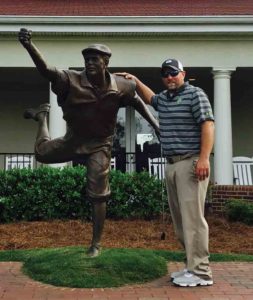 The Real Challenge Isn’t Floodwaters or Prepping for Tour Events

Anthony is quick to point out that whether a course is large or small, all superintendents face a common challenge: golf courses guzzle hours, days, months and years out of their lives. As much as superintendents may love their work, when the responsibility of a golf course rests on their shoulders, they continually find themselves torn between job and family.

Anthony and Andrea, now a child psychologist practicing in Endicott, are the parents of an eight-year-old son, Luke, and a three-year-old daughter, Giuliana. Luke enjoys short visits to the course and the pride of hanging out with dad, opportunities Anthony strives to create when possible.

“It’s hard to raise kids, and I feel guilty about working so much. I try to give Andrea any breaks I can,” said Anthony. “Giuliana is still a little young to spend much time at the golf course with me, but I love the time I spend at En-Joie with Luke.

“As a family, we attend a lot of sporting events together and try to really make the most of the time I have away from the job. But we are also like a lot of other households. Sometimes we are all together in the same room, with each of us doing something different. My wife and I will be on our phones, my son will be playing games on the television, and my daughter will have the iPad.”

There’s Family …and then There’s Your Golf Course Family

Anthony radiates pride as he talks about his accomplished wife and beautiful children, but he is clearly also proud of his “second family,” his golf course maintenance team. “We see each other,” he explained, talking about his crew, “more than we see our families. I couldn’t do what I do without my team, including my equipment manager Chris Howell, my second assistant Kyle Corcoran and my assistant superintendent, John Olson. They’re the real reason the people of Endicott have a course to be proud of.”