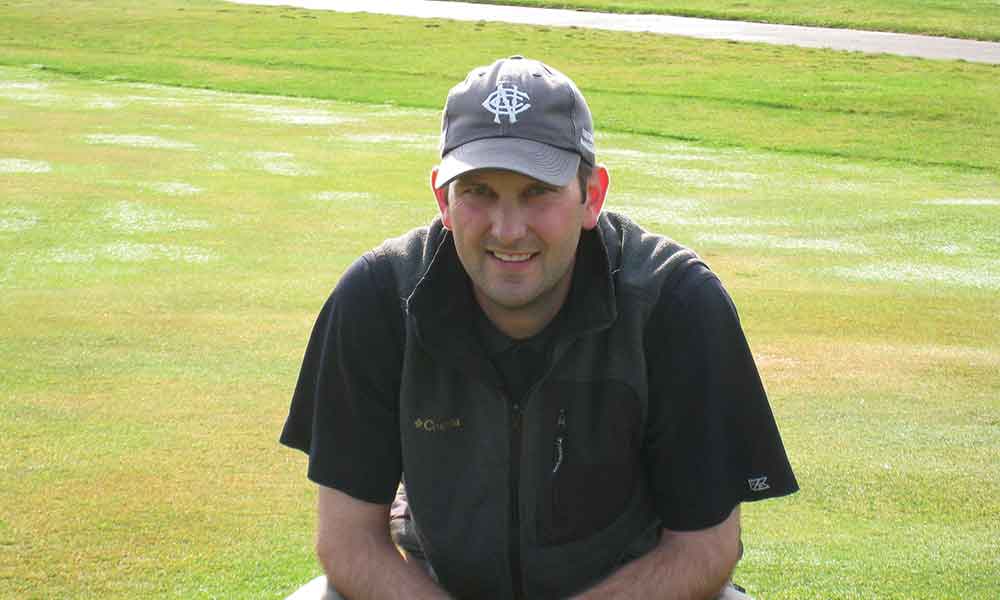 As I sit down to write this article, it is almost two years to the day since I was offered the Golf Course Superintendent position at Northland Country Club in Duluth, Minnesota. Northland Country Club is a 1927 Donald Ross design. The course was constructed on a bluff, which rises 500 feet above Lake Superior and offers spectacular views of Lake Superior from a majority of the holes. A round at Northland begins with the golfer at the lowest point on the course. After only three holes the player will have already risen 175 feet. The course continues to gradually climb another 125 feet, reaching its total elevation change of 300 feet on the 13th tee. Over the next four holes, the player works his/her way back down the entire 300 feet of elevation.

When I first saw Northland, the course had numerous eye-catching elements, but the original playing characteristics Ross intended, mainly fast and firm, were no longer present. Reintroducing these characteristics became central to my vision of what Northland Country Club could be. Two years after taking the position of Golf Course Superintendent, the Membership at Northland is enjoying their golf course like never before and the relationship between them and the Turfgrass Management Staff is exceptionally strong. Getting to this point was not easy, and implementing the necessary improvements was not always popular. But with education, vision, and support from the right people, we have begun to bring about a revival of Northland Country Club.

When I first heard the Golf Course Superintendent position at Northland Country Club was going to be available, I was two days from the biggest disappointment in my career. It was September, just weeks from my wedding day, and I had just missed out on a life-changing Superintendent position. The interview process for that position had begun in June and lasted throughout the summer. For three months I poured my heart and soul into multiple course visits, a presentation to the search committee, and three separate interviews. All of this while helping my then fiancÃƒÂ©, prepare for our wedding. After receiving the call informing me I had not gotten the position, the first thing I did was call the colleague who had been offered the job and congratulate him. Not only that but we spent some time talking about the strategy he felt gave him an advantage over the competition, and ultimately the position. Upon hearing of the Superintendent opening at Northland, I focused all of my energy towards creating an opportunity.

Not only did I feel pressure professionally to gain my first Superintendent position at such a gem of a course, I also felt pressure on a personal level. My wife is a native of Duluth and we had often dreamed of the possibilities of ending up at Northland and raising our family in Northern Minnesota. As soon as the Northland position officially became available, I set out to learn as much about the course and make as many contacts as possible. The first opportunity to do so came in the days before and after our wedding, which just happened to be in Duluth. Long before the Superintendent position became available, I had set up a round of golf for our wedding party the day before the wedding. This gave me the first opportunity to see the golf course and to begin gaining a vision for the future of Northland Country Club. After playing the course and returning from our honeymoon, I spent two more days walking the course, taking pictures, writing notes and gathering valuable information about the golf course. During these visits, I also had the opportunity to meet and speak with all but two of the search committee members.

When it came time for the interviews, not only did I have intimate knowledge of the golf course and strong ideas for how I wanted to go about making improvements, but the members on the search committee also saw me as a person who was passionate about being their Golf Course Superintendent. I have since been told it also did not hurt that my wife was a native Duluthian. The one thing I always knew I wanted to do as a Superintendent was to stand up for what I knew was right, establish myself as the expert, have a vision, and use that vision to guide the membership down a path of course improvement. I set out to establish this right from the interview process. I was candid when it came to my assessment of the golf course and how I was going to go about making improvements. Whether it was because of my passionate approach to the interview process, my wife’s connection to Duluth or a combination of the two, I was offered the opportunity to bring Northland Country Club to the “next level.”

The improvements necessary to bring Northland to the oft discussed and possibly unattainable “next level” were many. The thatch level in the fairways was off the charts, turf cover around many of the features was sparse at best, and topsoil in these areas was often non-existent. There were, however, many positives. Despite the thatch on the fairways, bentgrass was by far the dominant species, meaning the turf would not only benefit from but ultimately improve, from being dried out. The putting surfaces at Northland were definitely set up for success. I have often heard experienced Superintendents say that a person’s level of success in our industry is usually determined by the quality of the putting surfaces, and their conditioning should be the #1 priority. Years of topdressing had provided a strong sand layer and I knew with the proper management the greens would be fantastic. With a plan to accentuate Northland’s positives, I set out to begin the process of educating the Membership on how and why we were going to begin making improvements.

One of my strategies for making improvements began with the very word itself. Being positive in my communication was very important and while we were ultimately making changes to the golf course, the word change tends to hold a negative connotation with many individuals. However, when speaking about making improvements to the golf course most will find it hard to not feel as if something positive is going to be the end result. With this in mind, I made sure to communicate to the Membership at all points of the improvement process. In the beginning, I laid out a plan of what we were going to do and what would ultimately be the result. After presenting the ideas to our Green Committee, gaining their support, and then acting on the plan, I made sure the Membership was continually updated on the process. I let the Members know what they where seeing and why, and kept them informed of any improvements realized along the way. I also provided examples or anecdotes from others within the industry, which were pertinent to our situation. I was not afraid to let people know that at times the processes necessary to bring about improvement, would affect the appearance and/or the condition of the course. But in relative terms, they were looking at short-term pain for long-term gain. Once the worst of the improvement process effects were over, I would then communicate the progress we had made, including what the short-term pain had brought for improvement, and what the membership could expect to see in the future. In April, in this very space, Matt Shaffer of Merion Golf Club wrote of considering himself a “solution rather than a result.” Until I read Matt’s article, I did not think of what we were doing in these terms; however, bringing about improvements at Northland really was more about the solution to the problems rather than the immediate result.

By nature, Golf Course Superintendents are a modest lot. We tend to allow inner satisfaction with our accomplishments to keep us happy. Once the improvements are realized, be proud of it, show your membership the results and let them know what was gained by following the path you laid out for them.

I want to thank my wonderful seasonal staff. Without them, all of the vision and planning would be nothing. Also, my full-time staff, Assistant Superintendent Jake Ryan, Golf Course Technician Rob Tripp, and Equipment Manager Chad Terch. They make all the little things happen on a daily basis and allow me to focus on the big picture. For their efforts, I am eternally grateful. My family who listens to me talk about Northland and turfgrass management more than they probably care to. Of course, I must also thank my wife, who after all the work I put in, might just be the reason I got the job, and who quickly puts me in my place when I let work come home with me. Her support and understanding make everything so much easier. Last but not least, thank you to Golf Course Trades for giving me the opportunity to share my story with my colleagues.

The 7 Winds of Change
Renovation of a Lifetime
To Top