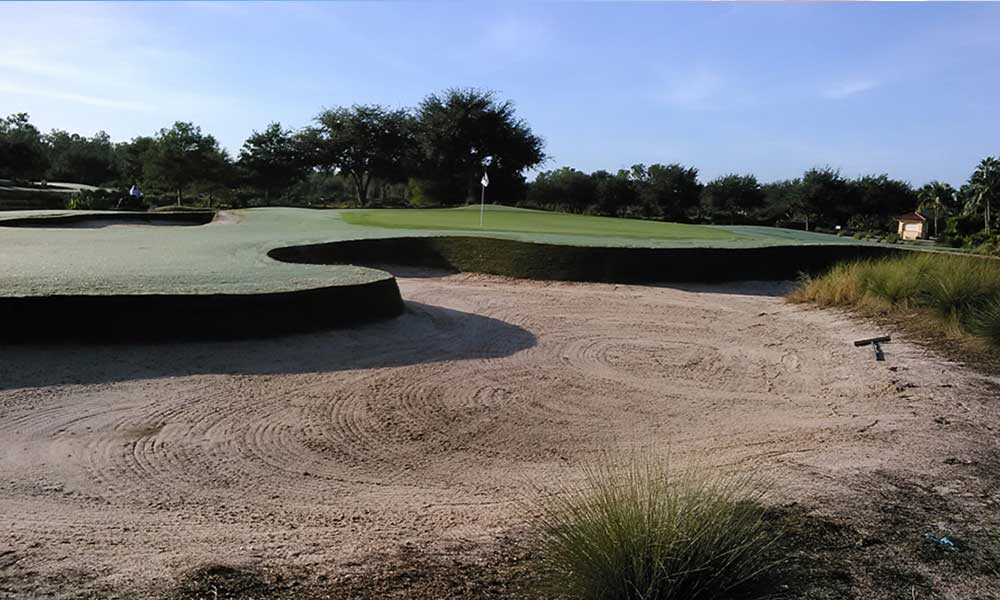 Tiburon Golf Club at the Ritz Carlton Golf Resort in Naples, Fla., recently became the first LPGA and PGA Tour venue to install the synthetic sod wall bunker solution Durabunker. Designed by Greg Norman Design and home of the LPGA Tour Championship and Norman’s own Franklin Templeton Shootout, the two championship courses at Tiburon features many sod wall bunkers, many of which have now been reconstructed using the patented Durabunker product.

“We have numerous 1998 original stacked sod wall bunkers on both championship courses at Tiburon GC, which have proved difficult to maintain over a number of years,” golf course superintendent Kirk Richmond said. “Having discovered Durabunker, which uses recycled synthetic material to build sod wall bunkers, we commissioned a Phase 1 build to reconstruct roughly half of the greenside bunkers on the Gold Course. We felt the Durabunker option was a perfect fit here and we have hopes it will be a strong investment for many years to come. We are excited about the potential longevity in the Durabunker wall construction and sustainability of the sod wall look along with the opportunity to maintain Greg Norman’s design intent”

“During the initial stages of the project, the Durabunker staff suggested we raise the floors a little to create a slight rise and fall in the sand line,” Richmond added. “Greg Norman, Hall of Fame golfer and golf course architect at Tiburon Golf Club, had concerns about some of the aging bunkers becoming a little over penal with flatter bases and steeper faces. The recommendation to slightly raise and soften some of the bunkers has worked really well and the bunker faces look fantastic, are less penal, however, still pose the same intended visual intimidation. We are impressed with the results produced by the combined team of Durabunker and Southeastern Golf and look forward to continuing the project to completion.”

“It was a genuine thrill to be on-site to oversee the work at Tiburon GC and we are delighted with the results and feedback we have received,” Durabunker founder and director Rhydian Lewis said. “The bunkers we’ve built there will far outlast the traditional method they were using and offer maintenance-free bunker faces for the lifetime of the product. The product can be built to fit many different design styles, from shallow edges to very high walls, offering stability, longevity, and a guaranteed fixed shape for the lifetime of the bunker. The natural shapes and elevations of the bunkers at Tiburon gave us a great platform to work from and by raising the floors slightly in places we were able to create a flowing sand line to match the beautiful shaping of the bunkers”

“Southeastern Golf worked with us seamlessly on what is our second project together and we have subsequently decided to set up a distribution agreement with them in the U.S.,” Lewis added. “They are very well situated to help us promote the product to the U.S. market and are also approved installers of Durabunker, meaning they can execute projects almost anywhere in the USA. We look forward to completing the project with them at Tiburon GC and forming a strong partnership with them in North America.”