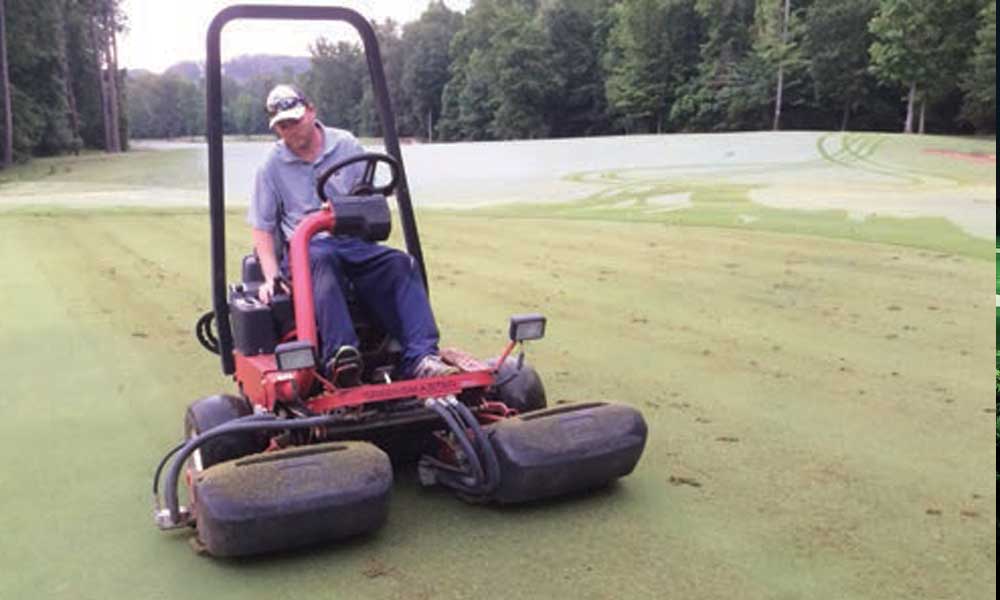 Summer has finally arrived for us and while many people are going on vacation or laying out by the pool for the managers of ultradwarf bermudagrass greens the work is just beginning. Speaking for myself I can say that I love my job. I love being outside, seeing the sun rise each morning, watching the wildlife play on the course, and I even like the challenges that comes with my chosen profession. One of the biggest challenges that we, golf course superintendents, face is finding the balance between the expectations of golfers and the health of the turfgrass, especially when it comes to putting surfaces.

For managers of the new ultradwarf bermudagrass cultivars that are replacing bentgrass greens all over the south thatch accumulation is probably one of our biggest issues. Thatch according to the dictionary is “a tightly bound layer of dead grass, including leaves, stems, and roots, that builds up on the soil surface at the base of the living grass of a lawn.” Thatch according to a superintendent creates soft, patchy greens which are slow, can easily be scalped, harbor insects and disease pressures, and restrict the inflow of water, air, and nutrients.

The greatest tool that we have in combating the excessive accumulation of thatch is the use of vertical mowing or verticutting. This is a process of using blades which are positioned vertically to slice through the surface and raise/remove growth which is not removed during normal mowing operations. Is thatch a big issue? Well the picture to the above shows the material removed from a single 10,000 sq. ft. putting green. If this material is not removed on a regular basis the greens will become soft and puffy and will not be an acceptable putting surface and will eventually fail to perform correctly.

Our practice for the past two days which we called “Verticutapalooza” because it was a party for both us and the greens was to vertical mow up one direction and then back down the same line with the blades set 1/16” below the rollers. This picture shows on the left the green surface following the verticutting practice and on the right the greens surface once it has been mowed with our normal cutting units. The thatch that was removed and the excess growth that is cut off of the surface helps to provide a firmer, faster, and more consistent putting surface.

Once the greens were mowed they were topdressed fairly heavily with a kiln dried green sand which was then drug into the surface with a carpet drag mat. The incorporation of sand to the surface helps in the breakdown of organic matter in the soil matrix, fills in any voids in the putting surface, and helps to aid in the infiltration of water.

We use kiln dried green sand for our topdressing sand because it mitigates some, if not all, of the concerns and/or complaints by golfers of the greens being topdressed. Many golfers are under the misconception that a green which has been topdressed will be slow, bumpy, or will drastically interfere with their round. A light application of topdressing sand will actually make the greens smoother, faster, and more consistent but the sight of a green topdressed with white sand, no matter how well worked in, will still cause some golfers to complain to the proshop. With our green sand if you don’t see us putting it out you are most likely not going to be able to tell the greens have been topdressed and in our mind is worth the extra cost.

Some golfers may see agronomy departments verticutting greens and think “They are destroying the greens. Why can’t they just leave good enough along?” We could but the putting surface would not be the best it can be and would eventually begin to fail, resulting in lost turf and extensive restoration of the surface. Basically it is a very short term, minimal disruption for the overall longevity of the green.

May was a very busy month for us with 21 outings and tournaments which limited the amount of cultural practices we were able to perform to the greens. We will be resuming our biweekly verticutting program starting next week so that we can continue to improve our putting surfaces in an effort to provide the best putting surface we can for our golfers and guests. Some had questions about what we were doing to the greens and I hope this has helped to alleviate some of those questions and concerns