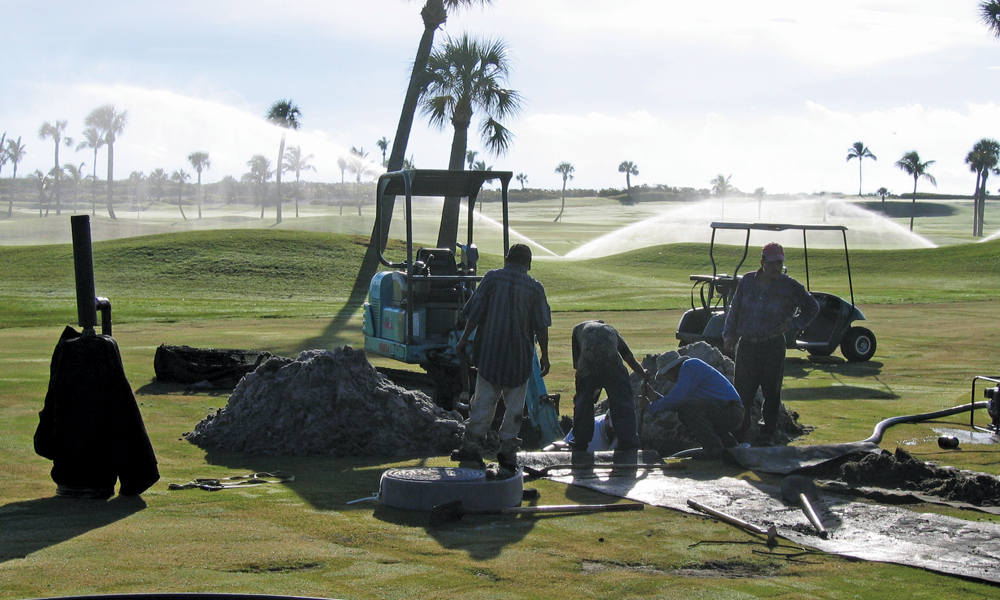 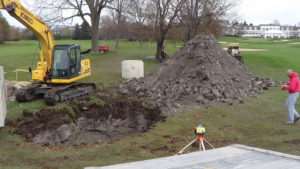 Inevitably, most golf courses have places where the water table runs too close to the surface, the soil has inherently low permeability or compacts over time or the drainage lines have insufficient slope. Rarely is a drainage challenge the result of only one issue. In almost all cases, a combination of factors is in play.

Drainage problems manifest as surface water, which is actual standing or streaming water. They can also be seepage water, which is evidenced by ground that is soggy despite the absence of surface water or ground that remains soggy after all surface water is removed. Compounding the issue of solving a drainage problem is the need first, to determine whether the problem results from the existing drainage system’s failure to collect excess water or its failure to transport the excess water away from the problem area.

More than a nuisance, drainage problems are costly. Muddy shoes mean mud in the clubhouse. Mud balls mean a cranky membership. And wet patches or soggy turf mean cart path only restrictions, potential loss of revenue, added demands on your maintenance staff and budget, compromised course esthetics and the risk of developing a reputation as a chronically soggy golf course.

Does Your Golf Course Need a Drainage Consultant?

Turf that isn’t properly drained is a target for disease. You can’t effectively mow wet spots, you can’t hit balls from them and you don’t want people walking or driving carts over them.

While most golf course superintendents are equipped to resolve routine drainage issues temporarily, if the same or nearly the same areas are wet too frequently, then you have to acknowledge that the problem has not truly been eliminated. Instead of throwing more money and man-hours at the situation with quick fixes and temporary solutions, the most cost-effective step is likely to be contacting an experienced drainage consultant.

A Man with a Plan

Dennis Hurley is the Founder and President of the Louisiana-based Turf Drainage Company of America (TDA). Recognized as the inventor of the Turf Drain Siphon System, Dennis’ designs have been awarded four patents in the field of seepage drainage. As a pioneer in bringing what is broadly known as “waffle drainage” to the golf industry, Dennis was the first to introduce the concept, showcasing it at the 1985 GCSAA show in San Francisco. 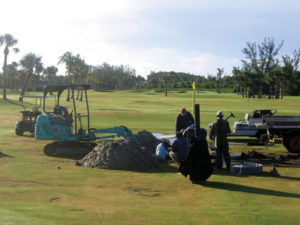 TDA primarily focuses on resolving drainage problems at existing courses by designing the draining system, manufacturing the parts needed and working with the golf course superintendent and the contractor for the duration of the project. “The methods we have developed give clubs an alternative to a total reconstruction,” Dennis explained.

When he is called in to assess drainage issues and develop a master plan for a golf course, one of Dennis’ first steps is to walk the course. “The superintendent and the workers who are on the mower day after day, can always tell you precisely where their problem areas are.

“On an eighteen-hole plan, we will spend two to three days onsite, walking the course with the superintendent and looking at each area that is keeping them from achieving the objective that we are setting out in the plan. 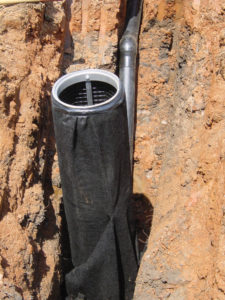 “Different clubs have different objectives. As we develop a plan, we customize it based on whether the club’s objective is to create tournament conditions for a major event, or to increase revenue by reducing the days that are lost to cart path only play.”

A properly executed master drainage plan is comprehensive in scope and includes cost estimations, plan notes, drain sites, site components, supplies such as sand, labor costs and a timeline for projected completion. Dennis points out that as each trouble spot is assessed, the best solution may be far more multifaceted than people expect. For example, a single fairway might be subdivided into three segments, each requiring a different drainage strategy.

For nearly thirty years TDA has worked with architects and drainage contractors across the U.S., laying the plans for resolving drainage issues effectively. Among the company’s many noteworthy projects have been renovations at Valhalla Golf Club (Louisville) in preparation for the 2014 PGA Championship and a project in 2003 at East Lake Golf Club (Atlanta). The work passed the ultimate test in 2009 following flooding that came only days before the PGA Tour Championship. The event was played without delay, and the ball was played down all four days. 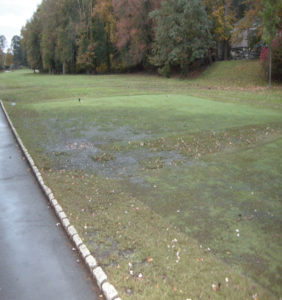 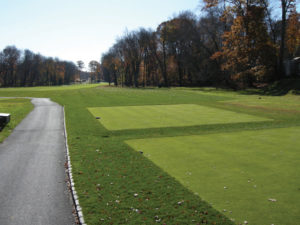 Although TDA specializes in renovation projects that take place on the turf and take only a single hole out of play at any one time, the company is sometimes called in during the construction and build-out phase of a course, as it was with Tiger Wood’s first course design in the U.S., the Bluejack National Golf Club just outside of Houston. “Our products,” said Dennis, “Have been installed by most of the large contractors at one time or another, usually on new construction projects or renovations where an architect specifies our materials, and the installations are usually in dirt, such as the work we did at Bluejack National.” 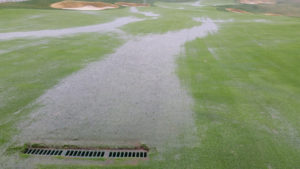 Following a particularly wet winter in 2015 and 2016, Chris Young, CGCS, Director of Golf Maintenance at Berkeley Hall, turned to the experts at TDA.

“Even though it is an extremely well-constructed golf course with an excellent infrastructure, heavy rains had left them cart path restricted for many months,” said Dennis.

Working with Mickey McCord, Dennis prepared a master drainage plan that included review of every hole at the facility, identification of problems and recommended solutions. Then, working one hole at a time, as is protocol for TDA, the contractor’s crew began executing the plan.

In the fall of 2016, during Hurricane Matthew, eighteen inches of rain fell at Berkeley Hall in a 36-hour period. After the storm passed, maintenance crew members took a utility vehicle onto the course. They were interested in how the holes where the drainage had been completed had weathered the storm. To their amazement, they found that thanks to the strategic efforts of the Turf Drainage Company of America, they could drive the vehicle on the fairway without even leaving tracks.

Like many people who make the golf business their avocation, Dennis loves playing the game as much as he loves the work he does improving the playability of courses. His golf trophies go back to 1962 when he won the National Pee Wee Championship, an event in which he also has three second place finishes. In 1969, Dennis made it to the quarter-finals of the U.S. Junior Amateur, and at the age of 15, he claimed the Cincinnati Men’s Amateur Championship—a record for youngest winner that stands today.

Fortunately for Dennis, his work takes him to great golf courses across the country, and when he leaves, he has the satisfaction of knowing that he has not only resolved critical issues of surface water and seepage at that course, but sometimes even has an opportunity to make a birdie or two.