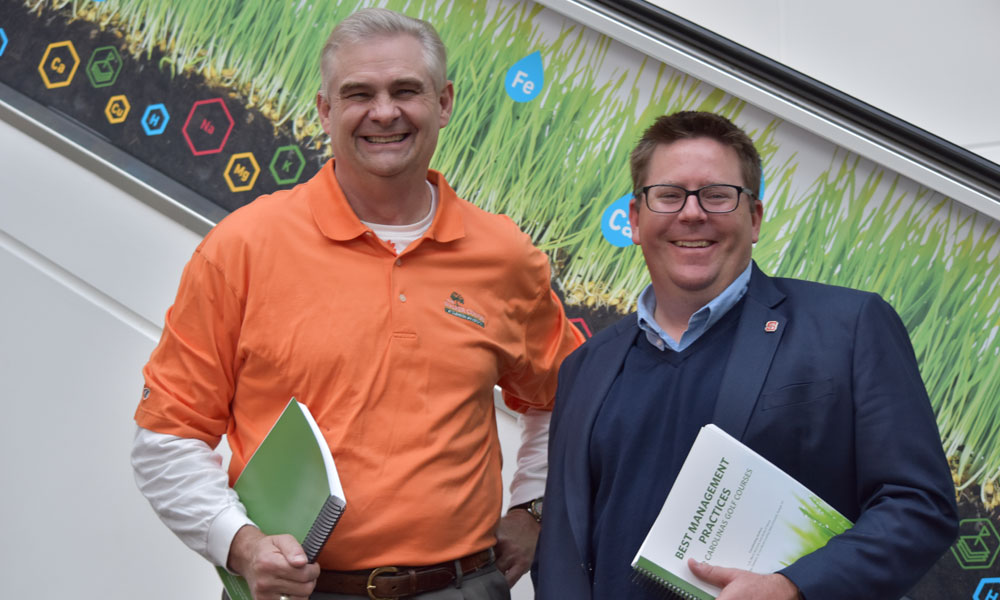 The Carolinas Golf Course Superintendents Association has published “Best Management Practices for Carolinas Golf Courses” – a nearly 300-page text that puts the best region-specific science and knowledge at fingertip reach of members. The manual, co-authored by researchers from Clemson University and North Carolina State University, was unveiled at the association’s annual Conference and Trade Show in Myrtle Beach, SC in November. 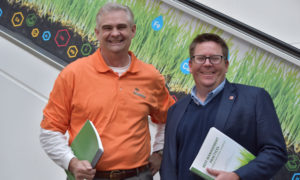 “We are extremely proud of this manual and what it stands for,” says new Carolinas GCSA president Adam Charles from The Preserve at Verdae in Greenville, SC. “It is an excellent reference tool for superintendents but just as importantly it clearly demonstrates just how committed we are to the environmental and economic sustainability of the game. The two go hand in hand.”

Charles says the BMP manual is an impressive record to place in front of lawmakers, regulators and others who make decisions affecting the golf industry. “They will see from their very first glance just how seriously we take our responsibilities, not just to our facility but to the surrounding community,” he says. “The vast majority of superintendents are already conversant with the contents of the manual. It will serve as an excellent reference for them. But it will be an eye-opener for many others I’m sure.”

Past-president Bill Kennedy, CGCS from Chechessee Creek Club in Okatie, SC says the collaborative efforts of authors Drs. Bert McCarty from Clemson and Jim Kerns from NC State are reflective of an industry-wide spirit in the region. “For the professors at these two institutions to work so closely together on this is a tribute to their professionalism and their commitment to the work we do,” he says. “We see that spirit play out all the time whether it’s from our industry partners on the sales and service side or amongst our members helping each other out as they did with the recent hurricane. It’s something very special.”

The manual was paid for by money raised in the annual Rounds 4 Research auction, which sells donated tee times online to generate funds for turfgrass research and related efforts. Rounds 4 Research was created by the Carolinas GCSA before going national several years ago under the auspices of the Environmental Institute for Golf. Manuals were delivered as a service to superintendent and assistant superintendent members in November.

The launch was just one of a host of high points at this year’s Conference and Trade Show which generated more than $650,000 in gross revenues, the second second-highest in the history of the event. Overall attendance was down slightly to 1,868 from 1,900 in 2015, a dip Carolinas GCSA executive director Tim Kreger says was likely a result of Hurricane Matthew hitting the Carolinas coast just weeks earlier and the fact the national Golf Industry Show is so close in Orlando, FL in Feburary.

“To still receive such wonderful support speaks to the strength of our conference,” he says. “It speaks volumes for the emphasis our members place on the ongoing education the conference offers. Many are still in clean-up mode after Matthew even now but they made time to get to the show because of the return they get on investing that time.”

Riley Boyette, assistant superintendent at The Golf Club at Briar’s Creek on Johns Island, SC won the Carolinas GCSA golf championship with an impressive two-under par round of 70 at the Dye Club at Barefoot Resort. Turner Revels of Revels Turf and Tractor in Fuquay-Varina, NC received the association’s highest honor, the Distinguished Service Award. Clatus Griddle from Hillcrest Golf Course in Orangeburg, SC was a popular winner of the $3,000 main prize in the 27-Hole Challenge.

The association also welcomed three new board members at its annual meeting. Brian Hollingsworth, CGCS from Dataw Island Club on Saint Helena Island, SC and Billy Lewis from Dormie Club in West End, NC were elected to fill vacancies. Chuck Connolly from The Club at Brookstone in Anderson, SC was appointed by the president to fill a vacancy created with the resignation of Charlie Spears from Cherokee Plantation in Yemassee.

Next year’s Conference and Show runs November 13 to 15.