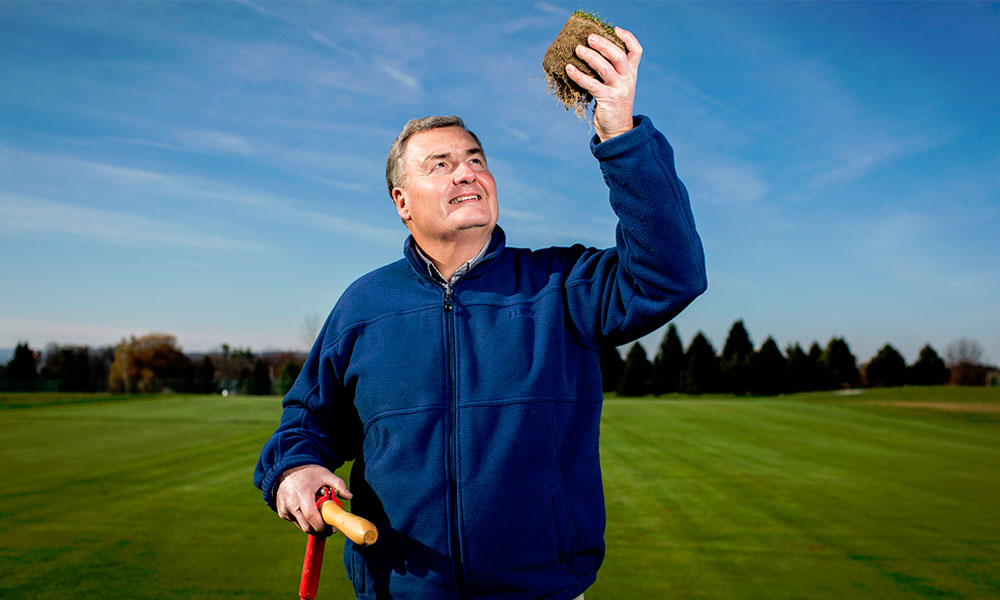 Hummel, of Trumansburg, N.Y., will receive the Green Section Award on Feb. 4, 2017, at the USGA’s Annual Meeting and Service Awards in Washington, D.C.

Hummel was raised in Buffalo, N.Y., and began his career in the golf business working on the maintenance crew, as a mechanic, and a night watchman at Park Country Club in Williamsville, N.Y. Following four seasons at the club, the graduate of New Mexico State University left to pursue advanced degrees at Pennsylvania State University, where he earned both his master’s and Ph.D. in agronomy, with an emphasis in soil science.

In 1982, Hummel relocated his family to Iowa, where he spent two years on staff at Iowa State University. In 1984, he joined the faculty in the turfgrass program at Cornell University, where he developed a reputation as a hardworking and dedicated educator and industry resource.

In 1991, he took a one-year sabbatical to work with the USGA on putting-green construction research. His work included travel with Green Section agronomists to examine greens around the U.S., as well as an extensive literature review.

“During his sabbatical from Cornell, Dr. Hummel worked with the USGA to study and update the USGA Recommendations for a Method of Putting Green Construction,” said David Oatis, director of the Northeast Region for the USGA Green Section. “These guidelines firmly established the USGA method as the best and most thoroughly researched in the world. His work has had a profoundly positive impact on the game of golf by helping courses build and renovate better greens that perform more predictably and reliably.”

Hummel left Cornell in 1995 to devote his full attention to a consulting venture he started in 1991. Hummel & Co. Inc. quickly became one of the most respected physical soils testing laboratories in the industry. The company has worked with more than 2,000 golf courses as well as clients in the sports and landscaping industries around the world, including the recent renovation of the National Mall in Washington, D.C.

“Dr. Hummel’s work has had a lasting impact on the industry and the construction, maintenance and playability of golf course putting greens throughout the world,” said Dr. Kimberly Erusha, managing director of the USGA Green Section. “His work with the USGA provided a thorough review and update of a globally recognized standard of putting-green construction, and it helped the industry better understand the intricacies of putting-green construction and performance. Dr. Hummel’s experience and willingness to listen and offer advice have made him a valued resource for the industry and a worthy recipient of the Green Section Award.”

Hummel spent more than 40 years in the industry as an instructor, researcher and mentor, guiding golf course superintendents and other turfgrass professionals on a national and international level. He has taught hundreds of seminars, authored many research papers and has written more than 100 articles for the USGA Green Section Record and various trade publications.

“I was totally surprised and a bit dumbfounded when I got the call,” said Dr. Hummel. “Receiving this award is an honor and I am humbled, especially when you look at the list of past recipients. I’ve always considered myself to be a regular guy who showed up to work every day. Over the years, it has been a privilege for me to work with superintendents on some of the great golf courses in this country. Never did I think that my work and contributions would extend beyond the individual golf courses into something industry-wide.”

Hummel, who merged the soil-testing portion of his business with Turf and Soil Diagnostics in January 2015, considers himself semi-retired and enjoys spending time with his wife, Terri, his three grown children and four grandchildren.

The Service Awards Dinner consolidates the presentation of many of the USGA’s most significant honors, highlighting people whose selfless dedication and notable accomplishments have made an important contribution to the USGA and its mission to serve the game. In addition to the Green Section Award, the Joe Dey Award, Ike Grainger Award and Herbert Warren Wind Book Award will be presented at the dinner. The USGA’s highest honor, the Bob Jones Award, will be presented in June at a ceremony during the week of the 117th U.S. Open Championship at Erin Hills in Erin, Wis.

Through the work of its Green Section, which was established in 1920, the USGA is one of the world’s foremost authorities on turfgrass management, as well as research, development and promotion of environmentally friendly practices and a more sustainable game.

About the USGA
The USGA conducts the U.S. Open, U.S. Women’s Open and U.S. Senior Open, as well as 10 national amateur championships, two state team championships and international matches, attracting players and fans from more than 160 countries. Together with The R&A, the USGA governs the game worldwide, jointly administering the Rules of Golf, Rules of Amateur Status, equipment standards and World Amateur Golf Rankings. The USGA’s reach is global with a working jurisdiction in the United States, its territories and Mexico, serving more than 25 million golfers and actively engaging 150 golf associations.

The USGA is one of the world’s foremost authorities on research, development and support of sustainable golf course management practices. It serves as a primary steward for the game’s history and invests in the development of the game through the delivery of its services and its ongoing “For the Good of the Game” grants program. Additionally, the USGA’s Course Rating and Handicap systems are used on six continents in more than 50 countries.

For more information about the USGA, visit http://www.usga.org.