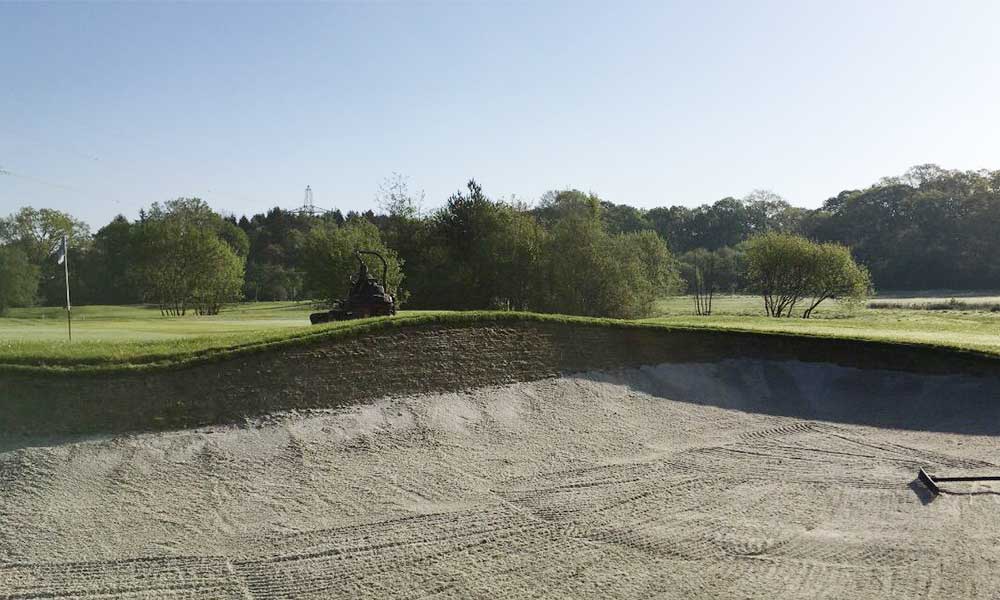 Seven years ago, Skylark Golf & County Club in Hampshire in the south of England, was in a sorry state.

“The course was opened in the late 1990s, and it was known at Quinn Dell,” says course manager Simon Bell-Tye. “And when I got here in 2014, it had been neglected and run down for most of that time. It was a field with holes in it.”

But the arrival of its new course manager was a sign that the place was on the up. Acquired by local company JDI (Just Develop It) in late 2013, the renamed Skylark hasn’t looked back.

“My boss at the time, Dan Richards, an ex-golf pro, had a real vision for the place, starting with making the course more presentable and playable,” says Bell-Tye. “But it was a big job. There was a weed called toad rush in the greens. I didn’t know what it was – I’d never come across it before – and the bunkers were just scooped in the ground.”

Now, though, Skylark’s bunkers are among its best-regarded features, thanks to the installation of synthetic edging system EcoBunker over several years. “I’m a member at Royal Winchester and I saw them doing the EcoBunkers there,” says Simon. “I mentioned this to Dan and he said ‘Good idea, get them in. Rich Allen came and explained their process, and we took him and their construction manager, Llewelyn Matthews, to the eleventh hole, which had our very worst bunkers. Then Llew spent a week showing us how to build the EcoBunkers, and we haven’t looked back since.”

But the ‘normal’ EcoBunker method wasn’t enough for Skylark. To reduce the bunker maintenance still further, EcoBunker CEO Richard Allen devised a new add-on, named EcoEdge – which sees top-quality artificial grass, backed with rubber, used as a rim for the bunkers. Compared to the usual EcoBunker Advanced methodology, where natural grass is planted on top of the synthetic edge, this obviously reduces the maintenance requirement for bunker edging still further. “Skylark was the first club in the world to use the EcoEdge system, although a number of other clubs have invested in it,” says Allen.

The reaction to the EcoBunkers was immediate. “Members loved them, so I got a budget to do a number of bunkers each year,” says Bell-Tye. “Ultimately, we have added fourteen extra bunkers to the golf course. We build them all in the house – last winter I used forty pallets of material in four bunkers – and they look wonderful. They are huge, and they just pop out at you.” Skylark’s success has come both on and off the course. From hosting one or two weddings a year, the club now does 140-150. And the golf? “When I joined we had 200-250 golf members. Now we’re up to 750, and we are full, with a joining fee,” says Bell-Tye.

Civil engineer Richard Allen invented the concept of synthetic bunker edges back in 2009 and founded EcoBunker Ltd. in 2014. Since then, the EcoBunker method has been used to build bunkers on around 400 courses in 34 countries.

Allen later modified his original construction method (which was patented in 2013) to create the EcoBunker Advanced system, introduced in 2016. EcoBunker Advanced uses a cement-modified backfill to create extra stiffness and stability, creating stronger revetted walls. EcoBunker welcomes inquiries concerning its system, which is patent-pending and invites anyone interested in it to make contact via ecobunker.co.uk.

EcoBunker supplies its product across the world through a network of distributors. The company also provides full contracting and project management services for bunker builds.