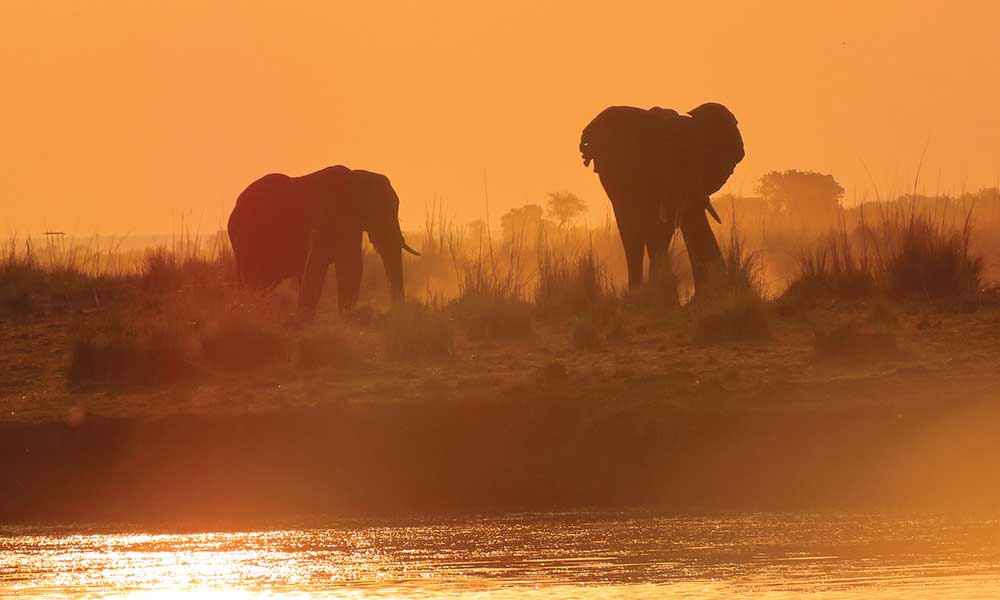 I didn’t go to Africa to play golf. I didn’t even bring a sleeve of golf balls, let alone clubs, shoes, tees, etc. This would be a different kind of trip, one consisting of seeing creatures my wife Anni and I had observed only in zoos. Beasts like elephants, lions, leopards, African (or Cape) buffalo, baboons, impalas, hippos, zebras, giraffes, rhinoceros, and birds of a million colored feathers.

We were part of a small tour group in southern Africa, an 18-day adventure with stops in South Africa, Zimbabwe, Zambia, Botswana, and Namibia. The round trip from our Seattle home was roughly 30,000 air miles. These included two 14-hour along with 8- and 10-hour flights, and much waiting in airports – especially Dubai’s, the world’s third-busiest hub. After returning home, we estimated we’d endured well over 20 passport and security checks.
Our days were filled with early-morning and late-afternoon safari drives or river cruises in national parks and wildlife refuges. We also went to famous places like Soweto Township in Johannesburg, the mile-plus-wide Victoria Falls, and Table Mountain in Cape Town. But with an open afternoon early in our stay, Anni and I, along with a couple from Houston, Mike, and Leslie, opted for a quick round in 95-degree afternoon heat. We taxied from our 116-year-old Victoria Falls Hotel to nearby Elephant Hills, a course designed by South Africa’s most famous golfer, Gary Player.

Upon arrival, we were met by several locals who led us up to the thatched-roof clubhouse. There, we secured our rental clubs ($6 a set), used balls (a dollar each) and caddies ($6 for nine holes), and paid the green fees ($8). Since it was late September, and just before the rains would hopefully come (much of Africa got only 30 percent of its annual precipitation the previous year), the layout was brown, except for the putting surfaces which, in some cases, were overwatered by old-style, pop-up sprinklers.

We were the only people on the course. But we were not alone. Romping across the roughs and nearby fairways were agile vervet monkeys, warthogs, impalas, crocodiles, and, as we were told by our caddies – Robert, Watson, Freedom, and Trust – highly venomous black mamba snakes. (Other interesting-named folks we met on the trip included Innocent, Africa, Truth, and “Big Mike,” a 5’9” guide and a great photographer.) In addition, gigantic termite mounds – one of the predominant geographical features of this trip – were everywhere.

My rented driver felt like a poleaxe, so I hit a 3-wood after the first hole for better control. After a well-placed tee shot on the par-4 18th (we started on the 10th tee), I asked my caddie, “Where’s the flag?” After staring at the distant green for a few seconds, he replied, “A monkey probably took it out.” Sure enough, when we walked up to the green, my ball was 12 feet from the cup, and lying nearby was the pin, yanked prematurely by the pesky vervet sitting nearby.

That’s the extent of my African golf experience, as the rest of our time was devoted to seeing an array of incredible animals. Visitors to this exotic place often seek to photograph the “Big Five” – lion, leopard, rhino, elephant and African buffalo, which we accomplished handily. Talking about big, we also saw many hippos, considered the continent’s most dangerous animal. These unpredictable and aggressive giants kill an estimated 500 people a year in Africa. Needless to say, we steered clear of these ton-plus behemoths on the river cruises.

Here are some personal observations of this wondrous part of our world:

We ascended 3,500-foot Table Mountain via cable car, whose floor rotates 360 degrees so all passengers can glimpse the sprawling cityscape and sun-glistened waters below. The very precipitous ride is closed during foggy and windy weather. We lucked out and got there right after the fog had cleared and before many other tour buses arrived. Due to frigid ocean breezes, the vistas at the top were literally breathtaking.

For once, golf was a mere sidelight for this adventure. But I couldn’t have been happier after experiencing the raw landscapes, free-roaming, and exotic creatures, and especially, the friendly and welcoming African people.

Jeff Shelley has written and published nine books as well as numerous articles for print and online media over the past 32 years. The Seattle resident is the co-founder of the Northwest Golf Media Association. He co-authored (with Michael Riste) “Championships & Friendships: The First 100 Years of the Pacific Northwest Golf Association.” In addition, he wrote three editions of the book, “Golf Courses of the Pacific Northwest.”