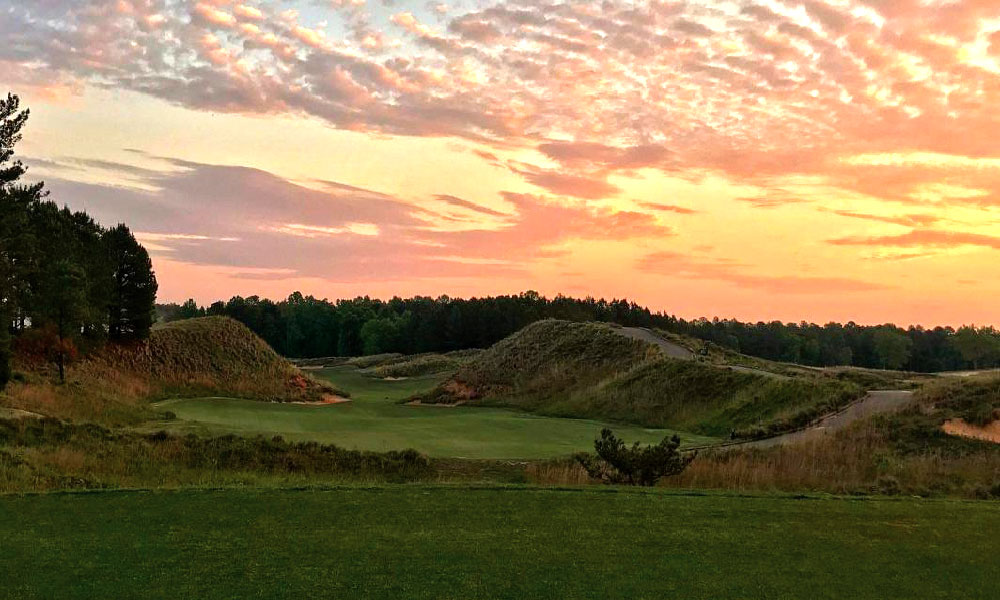 His name was Mike Strantz, but everyone just called him Maverick, and he was on his way to becoming one of the pre-eminent golf course architects of this or any generation before oral cancer took his life in 2005 at the young age of 50.

Tall and strapping with a bushy mustache and ten-gallon hat, Strantz – a gifted sketch artist and painter who used watercolors and sketches as his plans – and his associate Forrest “Fuzzy” Fezler were incendiary talents. And in the short decade or so in which he and Fuzzy were working together, Strantz built iconic masterpieces in the shadow of America’s greatest golf treasures.

First, he designed Caledonia and True Blue, two Myrtle Beach-area courses that catapulted to the top spots in the already golf-rich Grand Strand. Since opening in 1994 and 1995 respectively, the pair have been the most sought after rounds and highest rated courses of the over 100 designs that pepper the area. 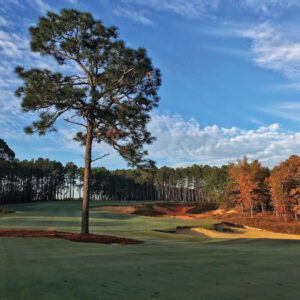 Architects have designed in the region for almost 90 years. Strantz reset the bar on his first attempt.

Later came Monterey Peninsula Country Club’s Shore Course, adjacent to both Cypress Point and Pebble Beach and widely considered as the architectural equal to both, a proper rejoinder to Alister Mackenzie and Jack Neville’s timeless classics. We profiled MPCC in this magazine here: (https://www.golfcoursetrades.com/california-dreamin-at-monterey-peninsula-country-club/)

Yet Strantz’s most indelible masterpiece – indeed his magnum opus – is Tobacco Road, a stone’s throw from venerable Pinehurst, but every bit as memorable and architecturally brilliant as Ross’s fabled No. 2. Called by Golf Magazine “The Most Adventurous Golf Course in America,” no course arouses passions in golfers like “The Road,” as it’s known to its friends.

“Mike’s greatest genius here was that he had an uncompromising vision and he stuck too it. He was not afraid of controversy or of building the best strategies that the land would suggest to him,” explained course owner and operator Mark Stewart, your textbook example of a warm, welcoming North Carolinian. “Mike wasn’t afraid of blind shots or challenging people to get outside their comfort zone, and although he put self-doubt in your swing, he also created monumental excitement.”

With an ocean of sandy soil as far as the eye can see as his canvas, Strantz took his already arresting visuals to the nth degree, creating wide, yet serpentine fairways swerving wildly around expansive waste areas and towering sand mounds. Part Pine Valley for its vast acres of sandy washes, and part Prestwick for its numerous blind drives and approaches, the result is a course that shows us the edges of the golf design map. It’s terra incognita, a world apart from what golfers had seen for decades: rich in risk-reward options while hearkening back to the strategies and design of some of the world’s most ancient strongholds of golf.

“I started in April of 1998, and was there through the whole building process, from before grassing,” explains Head Superintendent Morgan Stephenson, a lifer in the golf industry. His uncle was a superintendent at Eagle Crest Golf Club in Raleigh, so Stephenson has been working on golf course grounds crews since he was 15. “I went off to college at North Carolina State for their turfgrass management program and during one of my summer internships, I met Strantz at Wild Dunes.”

Strantz saw that Stephenson had not only an interest in turfgrass, but architecture as well, and as we all know, that’s the quantum leap one must make to become a top-echelon Head Superintendent.

“Before meeting him, I didn’t think about architecture, but I sure do now,” Stephenson recalled, chuckling.

Their friendship blossomed, and Stephenson followed Strantz to Virginia, where he worked for grounds crew and later became assistant superintendent at Royal New Kent and Stonehouse, Strantz’s Williamsburg-area designs. Soon afterward, when Strantz inked the deal to build Tobacco Road, Stephenson was a natural fit; it was a sort of homecoming.

“It’s a significant contribution to golf design, and as the years have rolled on people have begun to appreciate the greatness of it. All the holes are unique – there’s no repetition of holes found at any other golf course,” said Stephenson. “Tobacco Road stands alone – at least in the USA. It’s Golden Age architecture in Strantz’s inimitable artistic style: 3-dimensional, using a lot of vertical movement in the earth, and with multiple playing angles giving golfers many options to play a hole.”

Nowhere is that truer than at Tobacco Road’s par-5s. All four are showstoppers, beginning with the first. Standing on the opening tee box, you must drive your ball between two gigantic grass-covered mountains. The “Pillars of Hercules” the monoliths are called, and when you’re 200 yards away trying to hit a golf ball between them, they might as well be the Rock of Gibraltar.

“That’s no gentle handshake or easing you into the round. Mike wanted your attention on the first tee. He wanted to see how you’d respond,” Stewart noted, with a knowing smile.
The normal response is AYKM: “Are You Kidding Me??!!” I’m supposed to hit my tee shot where??!! I’ve never seen anything like this!”

That’s the greatest compliment you can pay a golf course architect.

Then there’s the bathtub green at the par-5 13th, perched high on a hill and surrounded by deep, narrow bunkers etched into the shaggy hillside.

“It’s a totally natural green site. It looks extreme, but that’s one of the more minimalist holes on the course” Stephenson observed. “That hole is all about placement. You don’t need length there, just proper positioning.”

“That’s the one place on the golf course where my partner Tony Woodell and I asked Mike, ‘are you sure about this?’ and he responded ‘Absolutely!” Stewart added. “The minute we saw the finished product, we not only knew he was right, but we were also really excited.”
Then there’s Strantz’s favorite, the short but dangerous par5 11th, which winds its way around deep bunkers, including a monstrous, seemingly bottomless greenside bunker, that gets deeper the further it extends along the green.

“I’d like the take the pros there and have then played that hole for $1,000,000 each of their own money,” Strantz confided in an interview with your author shortly before his passing. The depth perception gets harder the deeper the pin placement as well. That would be something to see.”
It would also be fascinating to see the pros tackle the myriad blind shots. Several holes are not only blind off the tee but semi-blind into the green as well. Some greens curve around enormous sand dunes, others are recessed into the dune’s face, and still others are almost completely obscured by the dunes. This gave rise to a poem called “The Tobacco Road Haiku,” (author unknown).

Where’s the freakin’ green?
Dude, I have no idea…
Check the yardage book.

(That’s five-seven-five, for those of you scoring at home.)

But blind shots are scary in name only. And there’s a secret to beating them at Tobacco Road or any other Strantz course.

“Go over the mound,” Forrest Fezler instructed Your Author many years ago. “Mike’s fairways are concealed behind the mound,” he finished with a grin.
The fairways are actually quite wide, and this concealed width opens upshot options for players, making the course playable and enjoyable by all skill levels…if they hit their fairways.

Strantz brought Prestwick and Pine Valley to the daily public golfer; it’s impossible to overstate that achievement. Along with the Bandon Dunes complex, Tobacco Road is the most important public course to open in this country since Sawgrass in 1980. It is also a quintessential match play course as fortunes of the round change from shot to shot, exactly what any truly great course evokes – and the road features such options and potential swings on each and every hole.

“Mike’s vision was singular. To generate that design and then build it on the ground was a huge achievement,” Stephenson said. “It’s a proper throwback to Golden Age architecture while being truly unique artistically. The Road may hearken back to other courses, but nothing looks like The Road.”