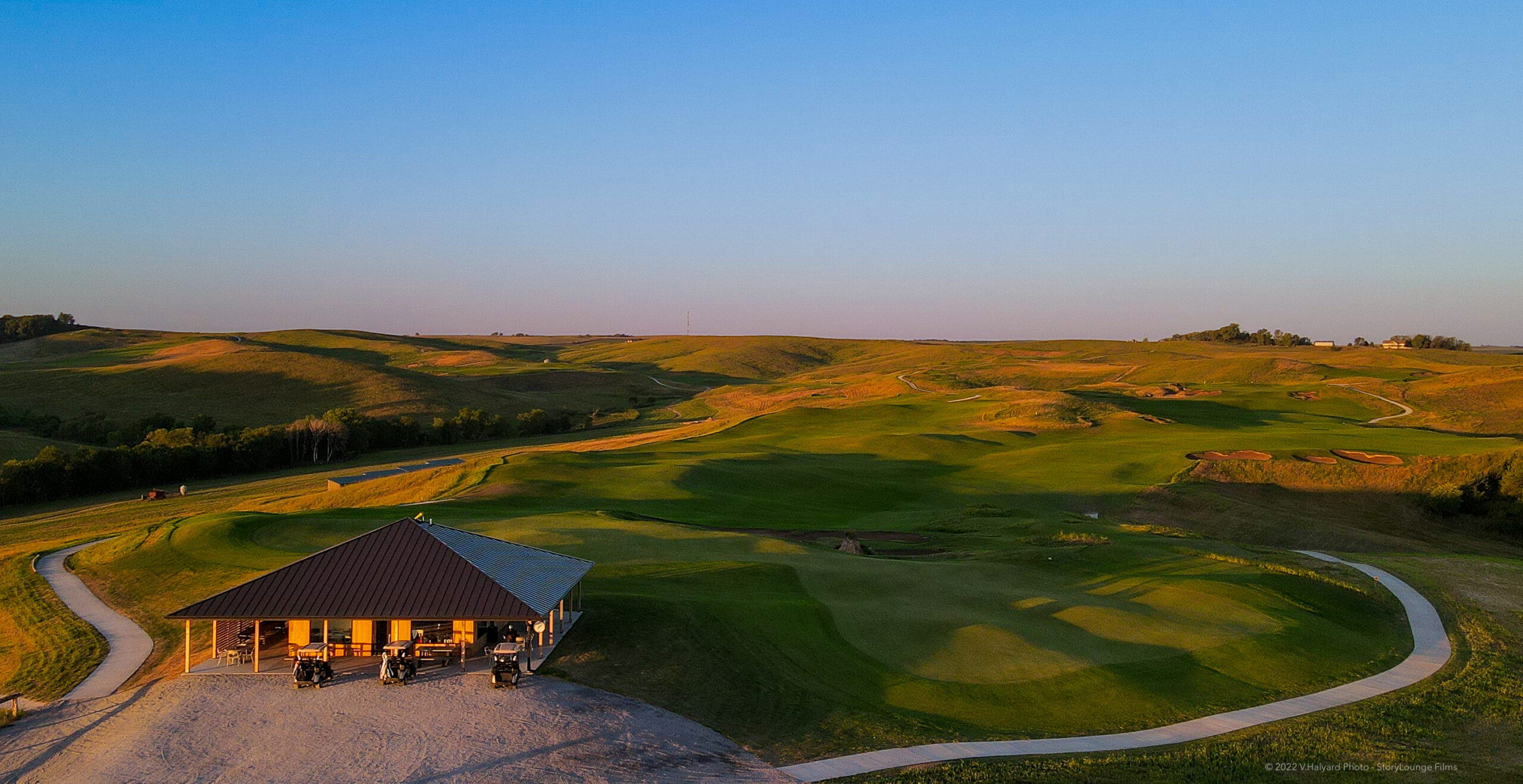 The new Landmand Golf Course in eastern Nebraska opened for public play on Saturday, September 3, after two weeks of preview play for its members. The 7,200 yard par 73 course, created by King-Collins Golf Course Design, broke ground on September 3, 2019, and opened three years to the day later.

Developed by the Andersen family, which has been farming in the area for a century, Landmand is a semi-private club with daily fee access. The course will close for the 2022 season on September 30. All public tee times for 2022 play have already been sold.

Landmand sits above the Missouri River in the Loess Hills. Loess is a sedimentary soil of glacial origin, borne by the wind and consisting of less that 20 per cent clay with roughly equal proportions of sand and silt. Speaking three years ago, after the first day of construction, Tad King said: “We discovered what glacial till is really like. It’s like butter. It’s like sand, but it stays where you put it. You can’t ask for anything better. It percolates, it’s consistent, it’s soft. It’s awesome.” Three years on, his optimisim has been proven justified, as the course is consistently firm and bouncy, appropriate for its ground-focused design. The course is exceptionally wide, with the double fairway for the first and last holes maxing out at 150 yards, and has greens that average 14,000 square feet, among the largest in America.

The course has already been much acclaimed. Tim Gavrich of Golfpass, the first journalist to publish his views on Landmand, described it as a ‘thrill ride’ and said that golfers would ‘see things [they had] never seen on a golf course before’. Developer Will Andersen said: “My only goal when we started this project was to build something that would be fun for local golfers to play. Rob and Tad have gone way beyond that and built something really remarkable. Every time I drive up the hill to the golf course I have a huge smile on my face.”

Pronounced ‘Lanman’, ‘Landmand’ is the Danish word for a farmer. The eighteen year old Karl Andersen came to the US from Denmark in the early 1920s, and settled in eastern Nebraska. Over four generations, the Andersen family has become a major farming operation in the area. The family developed the Old Dane golf course in 2012, and Landmand will be its second such operation. Despite this move into the golf business, farming will remain the backbone of the Andersen operation. The family is wholly committed to the area and community of eastern Nebraska, and hopes this new endeavour will bring it to new heights.

King-Collins Golf Course Design was founded in 2010 with the vision of creating bold, timeless, strategic, and artistically inspired golf courses at a below market price. Sweetens Cove GC in South Pittsburg, Tennessee, the firm’s first project, is ranked 63 on Golfweek magazine’s list of the best modern courses in America. The firm is working on projects across the United States; Landmand is its first eighteen hole course to open.