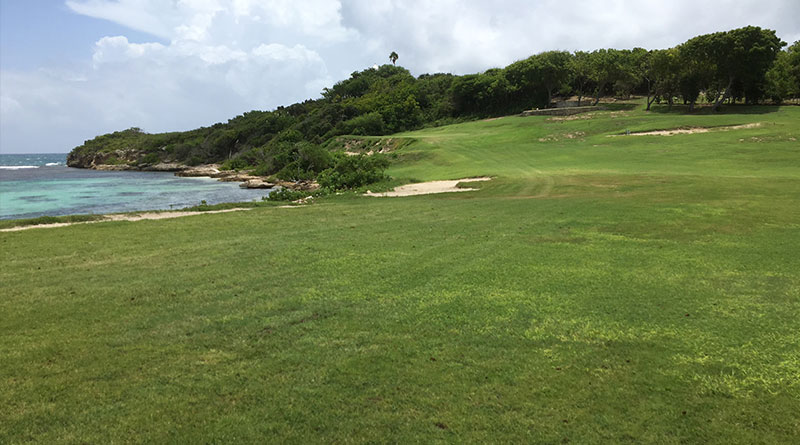 On occasion, golfers encounter serendipity in various and unlikely forms. Such moments may occur while playing new and unexpectedly exciting courses, meeting interesting folks, exhibiting rare but exquisite moments of playing brilliance, and forming life-long friendships out of trying, but ultimately fulfilling, circumstances.

Something similar to these happened to me in March 2008.

Spring is usually a busy time of year for those of us who write about golf. In addition to my work at that time for Cybergolf.com prepping readers for another season filled with tales of Tiger, Phil, Lorena, and the Masters, I did freelance pieces, most with deadlines in February and March. Among my “outside” gigs over a 10-year span was writing golf articles for Alaska and Horizon Air’s in-flight magazines. My focus for these pieces was on the new courses that would be debuting in the airline’s ever-expanding flight system the following year. (This enjoyable assignment ended when the development of new golf projects came to a screeching halt at the end of the “double zeros.”) 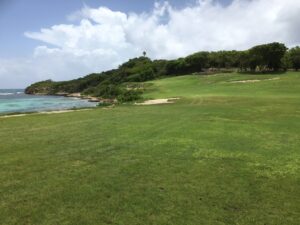 Despite knowing I had a full plate of writing duties on tap, my wife and I took a two-week vacation to Antigua, an island in the Leeward Archipelago where her sister and two kids, and brother resided. We’d been going to Antigua for 25 years; indeed, July 31st of 2008 would be our silver wedding anniversary and this was where we honeymooned. We had some interesting visits to this far-flung place over the years. One involved the time when I tried to calm down and tend to the major wounds of a paranoid-schizophrenic man who’d just jumped off a third-floor balcony onto rocks below, yet miraculously survived. But that’s a story for another time.

During our multiple trips to Antigua I managed to play all three courses on the island. They include, in chronological order: the very exclusive Mill Reef Club; Cedar Valley Golf Course on the north end of the island; and, in 2008, Jolly Harbour Golf Club near Reed’s Point.

Here’s some background on why we often went there. In the 1950s, my wife’s grandfather built a magnificent, cliff-side home at Mill Reef, which was later inherited by her uncle upon her grandpa’s passing. It’s one of only 53 residences within the 1,500-acre compound. On our honeymoon, we stayed in the family’s boat house, situated beside a cerulean bay connected to the Caribbean. Across a narrow channel from the beach house is Green Island, which for centuries has been visited by treasure hunters seeking gold believed to be stashed there by fleeing pirates. No such swag has ever been found.

When we first visited Antigua after our Seattle wedding in August 1983, Mill Reef Club – whose only entry is through a set of guarded gates – was virtually empty as it was off-season. But we had lunches at the club with two residents who lived there year-round. They regaled us with tales about the celebrities and/or business barons whose petitions to become member-residents were denied.

There are ultra-strict and apparently arbitrary, rules about who’s suitable to join Mill Reef, a one-time retreat of the Mellon family, poet Archibald MacLeish, and U.S. statesman Dean Acheson. Our new friends told us that the Club’s board had recently rejected a request for residency by actor-comedian Eddie Murphy. Native Antiguan and New Yorker Magazine journalist, Jamaica Kincaid, once wrote disparagingly of the place, “Like pigs, they keep to their own pens.”

My round at the nine-hole links course (a remodel of which, I later learned, began in 2015 by Georgia-based McCartin Golf Design) was memorable for several reasons. My playing partner was a retired investment banker, Mason Starring, one of our Mill Reef lunch mates who’s now long gone to the fairways in the sky. He was pushing 90 years old when I played golf with him 37 years ago.

Mason’s golfing accouterments included a power cart, an orange ball, and a human forecaddie. Knowing Mason’s vision was dubious, I offered to drive but he refused my offer. So our routine was this: Mason shuffling out of the cart; him barely able to lift the club shoulder height and then dropping it to make brushing contact with his orange ball; us lumbering back into the cart as the forecaddie pointed and stood beside the sphere 30 yards ahead; us driving right past because Mason couldn’t see him or the ball; me yelling at the also-deaf Mr. Starring to go back; him making a very slow U-turn, and repeating this process after every fairway shot.

On this went for three-plus excruciating hours at a golf course with nary another golfer about. I had to hand it to the forecaddie, though. He was amazing at finding my errant shots in the scrub and throwing the balls back onto nice lies in the fairway.

My second Antigua round took place around 1993 at Cedar Valley, a par-70 18-hole layout that “stretches” 6,157 yards from the tips. The initial nine opened in 1970, with the full 18 unveiled seven years later. Someone named Ralph Aldridge was the designer and builder. (After a brief Google search, I learned that this was the only course ever conceived by Mr. Aldridge.)

Though a cedar tree won’t be found within a thousand miles of this island, the facility must exude golf as it’s among a pantheon of like-named layouts scattered about the world. Cedar Valley is relatively rough-hewn, particularly in winter (a term used loosely here since the air and Caribbean water temperatures at that time of year are both around 80 degrees). It’s also when the hilly, gum-tree-lined fairways turn tawny-brown. 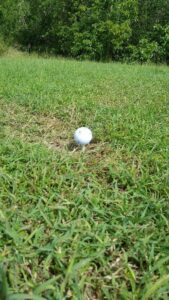 Back to that memorable trip in March ’08: I finally checked the final Antiguan golfing grounds off my list. When we arrived at Jolly Harbour, located within an eponymous resort, the greens had just been aerified and sanded. Because of these less than ideal conditions, I asked – and received – a significant discount on the $50 (U.S.) green fees. My wife and I gathered up our rental clubs, power cart, and the two sleeves of new balls we’d brought from home and set out.

We soon encountered the day’s dominant conditions: a howling wind and rock-hard fairways. Within two holes we’d lost three of our six balls. I soon determined that the rented driver and 3-wood were useless as the grips twisted completely around in my hands whenever striking a golf ball. Consequently, the rest of the way a more reliable 5-wood was the club of choice off the tees of the par-4s and par-5s. Still, we both kept wary eyes for “finders” in the rough to assure we’d complete all 18 holes.

On the first hole, a chameleon jumped up and planted itself on the windshield. It stayed there for the next 16 holes. As we drove over grass (green or brown), cart paths (whitish) and other areas (various hues) the lizard changed to the colors of its sudden new surroundings. When the lizard finally departed, it landed at a place it had probably never been before, likely separated forever from family and friends.

Several “greens” at Jolly Harbour had received way too much sand during the topdressing ritual. I’m afraid that, unless the maintenance staff later massaged the grit into the turf’s profile, these putting surfaces suffocated under the unforgiving Caribbean sun. But they were pretty quick, as was our round, completed in less time than my earlier one with Mason Starring. Other than a friendly Rastafarian on a mower, we saw only two other people on the course.

While in Antigua, I received an email – the internet works only occasionally in this part of the world – from my boss, telling me that he’d set up a trip to Pebble Beach and wanted to take four of us from our office on an outing there. I’d never played Pebble, so now was the chance.

My 19-hour return to Seattle was eased by reading “Tommy’s Honor” by Kevin Cook, “The Seventh at St. Andrews” by Scott Gummer, and “Marley & Me” by Scott Grogan. After I caught up on a pile of emails and posted several stories, a few days later us four Cybergolfers flew into San Jose International Airport. Within a couple of hours of arriving in California, I was standing on one of the golf world’s hallowed shrines.

Talk about a difference – besides the $500 gap in green fees – between Jolly Harbour and Pebble Beach Golf Links! About the only shared characteristics were that the weather was glorious at both places and each course sported tees, greens, and fairways. Though the round at Pebble took well over five hours – for many, this is the trip of a lifetime and visitors want to savor, and prolong, their experience with innumerable selfies and such – the cloudless 70-degree day was fabulous. Despite the sluggish groups ahead of us, playing the fabled 18th hole in the dark was still thrilling. After the round we headed to Clint Eastwood’s Mission Ranch in Carmel for steaks on its propane-heated deck.

The next morning, we ventured to Del Monte Golf Course in Monterey. Built-in 1897, the historic layout at the base of Jack’s Peak is also a joy. No frills or gimmickry, just what-you-see-is-what-you-get – or, more likely, where-you-hit-it-is-what-you-deserve – golf. After a four-hour round at Del Monte, we drove to San Jose and flew home.

A couple of days later I was back on the golf course, again with the Cybergolf team, this time for a pro-am at another place with a rich heritage, Seattle Golf Club. With roots dating back to the late 1800s and three sites for its courses over the past century, venerable Seattle GC is one of the West Coast’s oldest and most enduring golf institutions.

The current course, built-in 1906 on a promontory above Puget Sound at the city’s northwest corner, was crafted by early-day architect John Ball and Bob Johnstone, one of the Pacific Northwest’s first golf pros. Arnold Palmer extensively renovated the layout in the mid-1990s, adding shimmering ponds and refurbishing 15 holes in all. The result is an eminently walkable track boasting considerable hole-after-hole variety, with stately, towering Douglas firs, cedars (a species actually in abundance in our neck of the woods), and ornamental trees creating claustrophobic lines of play.

To recap: My first round of golf that March in 2008 completed my Antiguan triumvirate at Jolly Harbour on a warm day with a wind-whipped, frothing Caribbean Sea in the background.  Next up, Pebble Beach and Del Monte, where I got more sunburned than my two weeks in Antigua. Finally, back home for a competitive round at exclusive Seattle Golf Club, where the temp was 40 degrees colder than the previous two places, but the greens were still fast and firm.

Who says golfers aren’t adaptable? And, despite traveling 5,000 miles, suffering an aching back from airplane coach seats and accruing a lot of bogeys, not a bad way to spend a month.