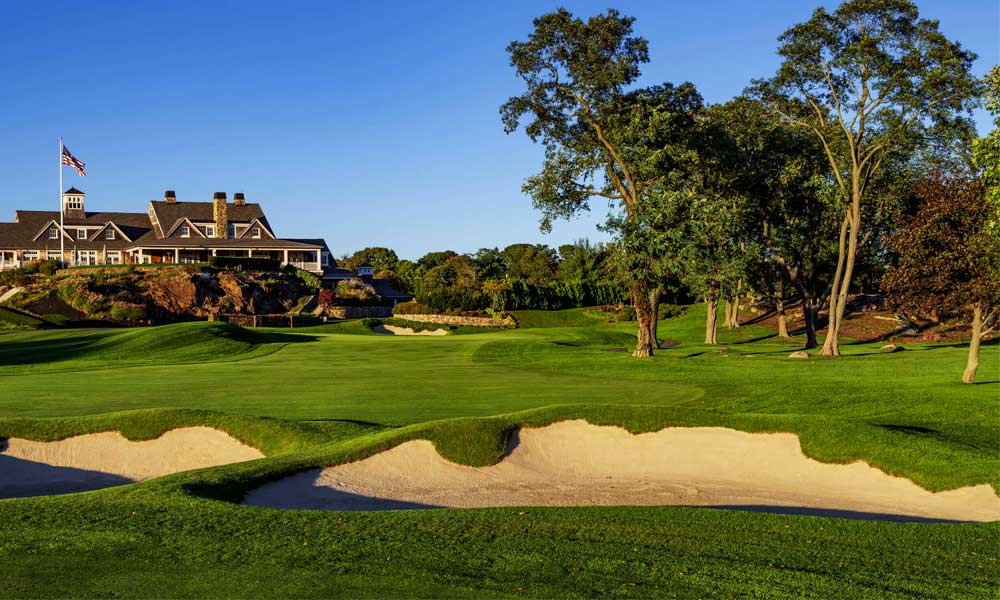 “I was thrilled to be here,” Hasak remembered. “I’d just finished four years at Hampden (now known as Great Horse in western Massachusetts), a relatively new course, and Tedesco gave me the chance to work at a club with a special history and property.

“Still, I was only looking at a four or five-year stint, since that was how I was looking at my career path at the time.”

Hasak was succeeding Paul Miller, a rising star in the superintendent business who was moving on to Nashawtuc CC in Concord, site of the PGA Tour’s annual Champions Senior Tour tournament at the time. Miller had taken the Tedesco course condition to a new level of excellence spanning 20 years. Hasak knew he had a tough act to follow.

“I was not necessarily looking to stay just four or five years and then move on, like at Hamden,” he clarified. “I simply didn’t know when I would find the job I’d want to stick with for the long term.”

But it did not take long for Hasak, a Fairfield, Conn. native, to realize Tedesco was all the career path he needed for what has now evolved into a 32-year assignment – and counting.”

No one is happier that Hasak has stayed on at Tedesco all these years than current president Luke Tsokanis.

“Peter has played a vital role in the preservation and improvement of our golf course,” says Tsokanis. “His respect for the golf course is especially evident today as we manage the challenges of satisfying the playing expectations of our membership, with the environmental demands faced by all clubs. Peter’s approach in proactively communicating with the membership has served to educate all of us and facilitated our ability to adopt changes that contribute to the betterment of our facilities.”

“Once I got into the routine,” Hasak added, “and fully realized what a unique place Tedesco would be for me to work long term, everything seemed to fall into place; everything clicked. I fell in love with the property quickly.”

Now, 32 years into the job, Hasak stands as the third longest serving course superintendent among the region’s “Fab Five” classic courses of Tedesco, Salem, Myopia, Essex and Kernwood. Only Eugene “Skip” Wogan at Essex (45 years) and soon-retiring Kip Tyler of Salem (38 years) have served their clubs for lengthier terms.

“It’s been a great experience,” Hasak says of his Tedesco years. “An understanding membership, two major projects that brought exceptional results, a new clubhouse, hosting major tournaments of all kinds for the members and outside golf organizations, dealing with fine people to work with and work for. I’ve been most fortunate.”

Only a few years into his Tedesco tenure, Hasak worked with noted architect Stephen Kay on a six-year restoration initiative that focused on bunkers and tees as well as the creation of a long-sought practice range they located behind No. 6 green. Nearly 20 years later, shortly before the tear-down and new-build of the iconic clubhouse, the club hired Pennsylvanian Ron Forse as its “architect of record.” Forse has done major projects over the last 25 years for a large number of five-star clubs in the country, including two such jobs for Salem – a complete restoration of its bunkers and a few years ago a two-pronged assignment — restoration of its Donald Ross greens, returning them to their original 1926 size and shape and the installation of a new drainage system for the greens. Both projects were completed in time to host the 2017 U.S. Senior Open.

Forse drew raves for his work at Tedesco in restoring all 78 bunkers, creating a new practice putting green adjacent to the pro shop and in rebuilding Nos. 1 and 3 tees. The club has also in recent years undergone a modest, but effective, tree removal program.

All activity has taken place under the watchful eyes of Hasak.

“The course has a new shine to it after getting all this attention,” says Hasak, 62. “The property really grows on you. The first time you play it, I’ve been told by many, the course grabs you in all the positive ways.”

Hasak caddied at fashionable CC of Fairfield starting when he was 12, joined the grounds crew at 16 and was quickly hooked on the game and the profession of golf course management.

He attended UMass/Amherst’s Stockbridge School for turf management, spent a brief internship at Brooklawn CC and Aspetuck Valley, then after graduating from Stockbridge, he became superintendent at the nine-hole Amherst Golf Club for two years. He worked at nearby Hickory Ridge golf course for two more years before moving to Hampden.

“All these jobs have helped me grow as a person and a professional leading to my ultimate experience at Tedesco,” says Hasak. “Everything has worked for me just as I had hoped here. I’ve gotten wonderful support from the membership and the Board. I appreciate the level of trust they’ve always had in me. I’ve tried to maintain a high level of communication. This relationship has made it so that I come to work every morning with a smile on my face.”

Tedesco is best known for its outstanding playing conditions, especially on the greens, which rank as the best – and fastest – on the North Shore along with Myopia’s. “I work with 14 original greens and four rebuilt (Nos. 9, 11, 12, 17). The surfaces are for the most part flat. Bottom line: I make them the way the members want them.”

Congratulations to Salem’s Michael McLaughlin on qualifying for the Massachusetts Amateur at Cummaquid with a 72, the last qualifying score. He’ll be at The Country Club for the main event on July 15-19. Also to Joe Mahoney, Jr., and Thomson’s Tom Finocchio after they won the 93rd Salem CC Fourball, beating Gary Neals and Thomson’s Dominic Petruzzelli, a regular playing partner of Finocchio’s at their home club, in the title match. Mahoney can now say that the fourth time is the charm. He had lost three prior times in the final, one of those with Finocchio.

Rob Oppenheim missed the cut at last week’s Korn Ferry (former Web.com) Tour when he scored 143, four off the cut line. A vivid reminder of why he and others battle for years on the Korn Ferry and PGA Tours seeking to break through is what happened last week at the Travelers Championship outside Hartford. Chez Reavie, third the prior week at the U.S. Open, won the Travelers and $1.3 million, his FIRST PGA Tour wins in 11 years and 250 events.

We mourn the passing of Ossie Keiver, Jr., and Walter Robb.

Reading The Greens is a weekly golf on North Shore golf by Gary Larrabee, a former Salem News sportswriter from 1971-1995. He has covered golf locally and beyond for the last 50 years.