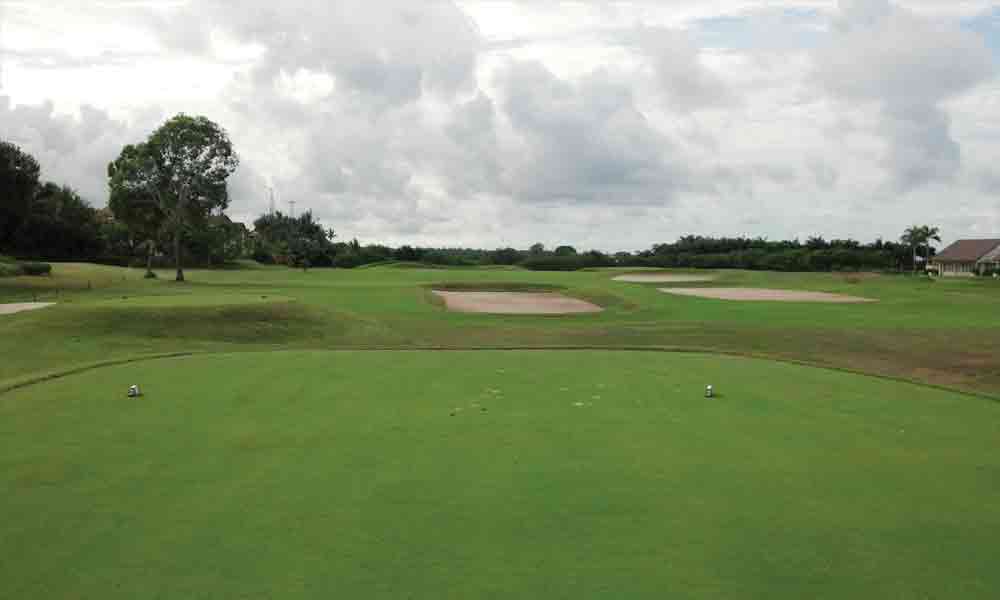 While doing due diligence for my first trip to the Dominican Republic I was told by someone whose opinion I respect that, “Casa de Campo might be the greatest resort in the world.” Even though I trusted this person implicitly, that seemed like hyperbole, so I filed it in the back of my mind with a fair dose of skepticism. After all, it’s a big world out there, with a lot of golf resorts.

Four days later, sitting high on a hill overlooking the Altos de Chavon, with a breathtaking cliff-side golf course in the background, a gorgeous, athletic, bedroom-eyed young brunette in the foreground, and a billion stars blazing overhead, I realized my friend may have understated the case. It is a big world out there – and Casa de Campo sits right atop it.
Casa de Campo is Pete Dye’s place; to date, he’s designed all 90 holes at the complex (63 public, 27 private) with another 18 planned. Playing the courses at the resort in the order in which they were designed, a golfer can see the progression of Dye’s architectural design strategies over time, from 1969 to the present day. Indeed, the resort essentially doubles as a museum of Dye’s architectural career; not just a bucket list golf trip, but required research for every budding golf designer.

Of course everyone in golf knows Casa because of Teeth of the Dog, one of Pete’s indisputable masterpieces and the genesis of many of Dye’s holes found at major championship venues like Whistling Straits and Kiawah Island. It’s been number one on almost all rankings lists for the Caribbean and American off-shore destinations since the day it opened. But Teeth of the Dog was only the beginning. Dye followed Teeth with the Links course in 1974, a private club, La Romana, in 1986, and Dye Fore in 2003. Recently, Dye added nine new holes at both Dye Fore (the “Lakes,” but colloquially known as “Five” to Dye and his friends) and La Romana, (simply called the “New Nine). But it’s Dye Fore that has mesmerized and enchanted the golf intelligentsia since its opening and has everyone asking “Is Dye Fore even better than Teeth of the Dog? Is it the best in the Caribbean?” 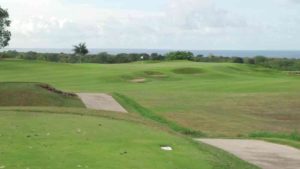 High atop the brownish-blue river with the seemingly impenetrable tropical jungle reaching all across the horizon, a boat lazily chugs its way along, following the curve of the 10th fairway of Dye Fore, which clings perilously to the cliff-top some 225 feet above. It was here that the memorable nighttime battle scenes from Francis Ford Coppola’s Apocalypse Now were filmed. Even the most jaded and well-traveled golfer can’t help but be in awe of the sheer power and majesty of the setting, some of the most primal terra incognita ever chosen for golf anywhere.

The golf course looks – but more importantly plays – like it was 100 years old. Indeed, upon close examination, you’d be convinced it was designed by Seth Raynor, which was exactly what Pete would hope you would think.

“Seth Raynor is my favorite designer,” Dye’s said countless times, and nowhere does it show more than at Dye Fore, which is doubly astonishing considering Dye built Dye Fore in 2003, during his move towards a more hypermodern look to his courses. Colleton River, Purdue, Whistling Straits, and Barefoot Landing, were all behind him. Suddenly, seemingly out of nowhere, comes this masterful blast of unapologetically classic, Golden Age architecture. Enormous geometric bunkering, frenetic movement in the fairways and greens, brilliant strategic angles and options, the ground game in play on every shot: for everyone who laments that Pete Dye never designed a U.K. or Irish seaside links, his greatest and most authentic looking links is right here at Casa de Campo.

The landforms and features at Dye Fore are gargantuan, absolutely enormous in scale. The fairways can be as wide as 120 yards across, (useful in a crosswind!), the bunkers can be up to 100 yards long, (like the great courses of Macdonald and Raynor), and greens are frequently larger than 6,500 square feet. It feels so big when you’re out there, that I was astounded when I heard it was built on only 190 acres, until it hit me that it’s all playable – there’s almost no rough to speak of. There’s scarcely any rough at the entire resort actually, another thing Casa De Campo does amazingly well, because no rough. Plus, no rough brings out the wondrous fairway undulations.

Moreover there is great horizontal sweep to the fairways as they curve around the bunkers, hillocks, river, and oceanside. That means you have to factor in the ground game in two ways: first, you can play low running shots, and second, you have to consider what the ball is going to do after it lands. With tilted fairways, you must account for how much your ball will run out. Happily, we no longer dismiss such architectural features as unfair or anachronistic. After all, the ground movement is the soul of golf. 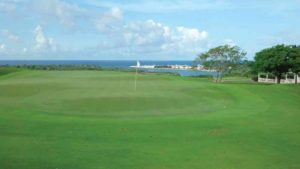 Dye Fore shatters all expectations because it takes all of the golf industry’s preconditioned views and canned summations of what they think Dye is all about and turns them on their head. There are no island greens, no railroad ties, no enormous man-made ponds, and no pyramid-shaped mounds. Dye Fore shows everyone that they were wrong all along as to what Pete Dye was all about architecturally. One of the reasons why it’s taken so long to achieve the same magical glow as Teeth of the Dog (besides its remote location) is that it’s the kind, of course, that confused the critics. It wasn’t what they were expecting. Suddenly they couldn’t fit Pete Dye into the convenient little sound bytes they’d parroted for years. But make no mistake, Dye Fore is every bit as good as Teeth of the Dog, and many who play it actually prefer it to its more well-known brother.
“It’s the best course here,” asserted golfer Mary Block. “I’ve been coming here for 25 years, and I’ve seen the resort get stronger ad stronger every year. Dye Fore is even better than Teeth, which is saying something because Teeth is one of the greatest in the world…so Dye Fore must be too!”

With a scope and grandeur as deep and broad as the Caribbean, Dye shows you that he’s limitless and boundless. And achieved all this sketching the golf holes in the sand with a stick, but that’s ultimately what’s so laudable about it – he accomplished this in exactly the same hardscrabble way the Golden Age designers built their masterpieces.

“I just go out there and design the best holes the land has.” “I just like building golf courses,” said Dye, when I interviewed after that trip. “This is what’s good for golf: 6,500 yard courses with good green contours, fairway undulations, and interesting architecture, even some quirkiness, along with three to three and a half hour rounds. We need more of that in golf. That’s how to grow the game!” but that’s ultimately what was so laudable about it.

Part 1: Golf in the Land of Beauty (and Sheep)
Ernst Conservation Seeds: Sowing the Seeds, Reaping the Harvest
To Top