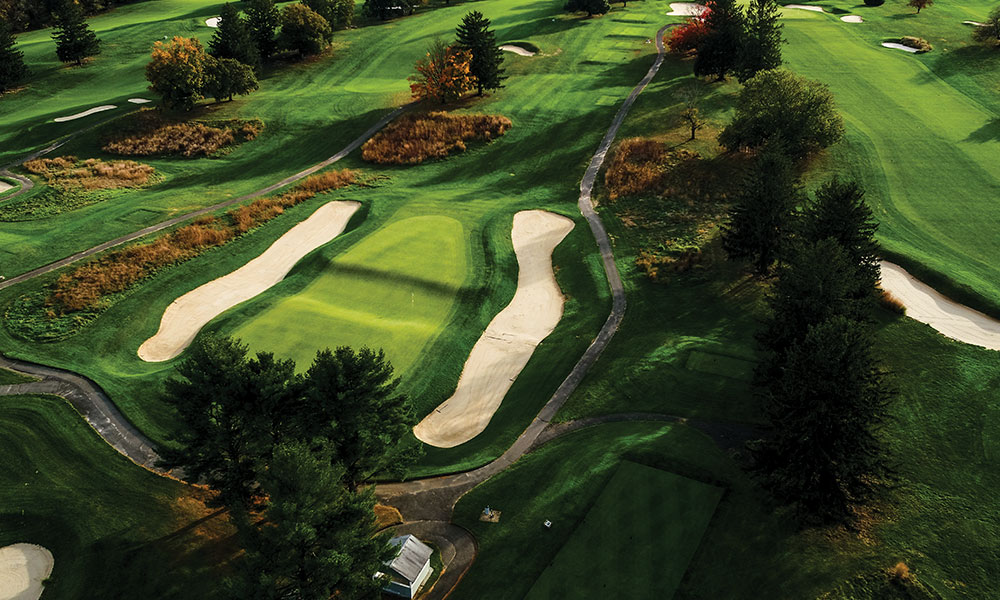 The hottest trend in golf design right now is to recreate the strategies and designs of the greatest and most important Bloodline in American golf course design: Charles Blair Macdonald, Seth Raynor, and Charles “Steamshovel” Banks. Sometimes the architects come right out and build courses indirect tribute to them, such as Old Macdonald at Bandon Dunes by Tom Doak or perhaps Contentment in North Carolina by Lester George, still in the planning and building phase, but expected to open soon. Sometimes private clubs, such as Sleepy Hollow Country Club recreate what Macdonald, Raynor, or Banks might have done to turn their course into a cohesive whole, (as we discussed in this article). But most often we find Golden Age courses simply stewarding their Bloodline masterpiece into the 21st century with a combination of restoration and renovation that keeps the strategies intact, but makes accommodations for the length of the modern golfer.

But what are these template holes? A collection of just over two dozen different strategies meant to test all aspects of a golfer’s talent, including accuracy, distance control, and most important, intelligence. They are holes that the Bloodline would look for on whatever piece of property they were given, and then fit them to the land like a 3-D jigsaw puzzle.

Four years ago we highlighted one of the true greats of the Macdonald-Raynor-Banks catalog, their final masterpiece, Forsgate Country Cub’s Banks Course, by telling the story of their magnificent 17th green. (Click here for that piece) Let’s take a closer look at not only the mighty 17th at the Banks Course, as it’s called, but many of the other classics you’ll see around the country, from the coast of California to the shores of Long Island Sound and everywhere in between.

It’s a nearly infallible way to determine if a course was designed by the Bloodline: a few rare exceptions aside, they designed four par-3s all of the different lengths. They are called, in ascending order of length, Short, Eden, Redan, and Biarritz.

Generally anywhere from 100-150 yards in length, it’s the green contours and surrounds that defend par, not length. Even though the golfer has a short iron or wedge in his hands, it’s a nervy shot. At the 12th at the Banks course, the green is a perfect circle, nearly completely surrounded by sand, and slightly elevated from its surroundings. A thumbprint feature in the green not only divides the green into two smaller sections but makes a gorgeous horseshoe shape. Pinning the perimeter is the more difficult test. Placing the cup within the bowl makes for some fun golf as players may use the contours of the thumbprint to draw the ball back towards the hole, hoping for that elusive ace. Forsgate’s Short, called “Horseshoe,” plays right around the average length for this template.

Responsibility for maintaining such a dramatic feature at one of the country’s most venerable and historically important golf courses falls to Head Golf Course Superintendent Don Asinski, a graduate of the Rutgers University Turfgrass Management Program.

“In my opinion the best quality of cut in maintaining greens, I get from the Jacobsen Eclipse Tri-plex greens mower, using 15 blade reels with front groove rollers,” Asinski confided. The sparkling results speak for themselves: every green – especially the most dramatic – is pristinely and superbly conditioned.

The Eden hole is derived from the 11th hole at the Old Course at St. Andrews. Usually measuring between 150 and 175 in length, the original is guarded in front by three golf course bunkers and guarded behind by the banks of the River Eden. The two bunkers on the left are called “Hill” and “Strath” and the large right bunker is called “Shell,” due to its seashell-like shape.

Knowing full well that Forsgate was the last course he would build in America, Banks made the par-3 holes at Forsgate showstoppers, sometimes much longer than their usual length. The Eden appears at Forsgate’s third hole and is likely not only the hardest par-3 on the golf course, but it’s also far longer than the average, playing usually from 170-190 yards from the member tees. A version of Hill bunker guards the left and bunker behind, called the “Eden Bunker,” emulates the banks of the River Eden, but it is Shell Bunker on the right that poses the greatest threat as its floor sits a whopping 17 feet below the putting surface. The sides of the golf bunker, like all those at Forsgate, are shaved down for tournaments, so mis-hit shots that fail to reach the green won’t hang up in the rough, but roll down the bank back into the bunker and wind up at the player’s feet or worse.

Better still, Banks threw in a modification to make the hole even more difficult, a hog’s back that divides the already shallow green into two smaller targets. There is really no good place to miss. That’s why a par here frequently picks up a stroke on your opponent, maybe even two.

It’s the most copied hole on Earth, and it is also the one most watered-down by golf course architects. The original Redan Hole is found on the 16th at North Berwick in Scotland. Intended to measure anywhere between 170 and 210 yards for most golfers, the Redan’s quintessential elements are

That’s the feature most diluted by modern architects. Without the green running away from the player and the companion kickplate, it’s just another garden variety par-3. Generally, the green is set diagonally and runs from the front right to back left, and calls for a draw, but the reverse is also used by many architects and is referred to as a Reverse Redan, (although some use the term “Nader” – Redan spelled backward).

Forsgate’s seventh hole is a Reverse Redan and a formidable one. Just like the third hole, the golfer has a longer club in their hand, and there is really no good place to miss. Usually playing anywhere from 175-215, the entrance to the green is only seven paces wide. The left of the kickplate is no good due to a deep bunker guarding that side, and the Redan bunker on the right is roughly 18 feet deep. The green runs away from the player quickly, whether it’s on the tee shot, or even just chipping and putting. No less a personage than Ran Morrissett, now rankings editor for Golf Magazine opined that a front pin on seven is, perhaps, the toughest hole location on the entire golf course.

As an aside, public golfers from the New York City and Northern New Jersey area can not only see all of these wonderful par-3 templates at the Knoll Club West Course in Parsippany, New Jersey, but their 18th hole is actually a two-shot Redan, perhaps the only one in existence designed by Macdonald, Raynor or Banks.

The longest of the par-3s is also the grandest in scale. Nearly all great Golden Age golf courses have a par-3 where the driver (or at least a long fairway club) is required off the tee. Derived from its namesake hole in France, Biarritz holes usually exceed 220 yards in length, and some extend as far back as a whopping 275 yards! But the quintessential features of the Biarritz are a large deep swale bisecting the green into two parts. At some courses, the swale appears in front of the actual green – for example, Mid-Ocean Club in Bermuda – but far more common (and fun) are the instances where the swale appears as part of the actual green. Two long bunkers, called the “Tusks” extend the entire length of the green, flanking it. Your irreverent wag of an author sometimes refers to them as “Left Twix” and “Right Twix.”

Forsgate’s Biarritz green is 84 yards deep from stem to stern, and its swale is 25 feet across and just under six feet deep. The club is generous with the member tees, usually offering distances anywhere from 170 yards back to 215, but the tips can extend to an eye-popping 272. There is even another thumbprint in the green, located in the middle of the back section. A pin in the swale provides the most excitement as once again, players can use the contours to filter the ball to the cup.

“When I first started at Forsgate, we had to buy all-wheel-drive mowers to get up the slope of the swale,” Askinski said, smiling as he recalled the memory. “Also when you have greens with so many ridges and undulations, your water management must also be fine-tuned with hand watering so as to ensure a consistent moisture throughout the entire green.”