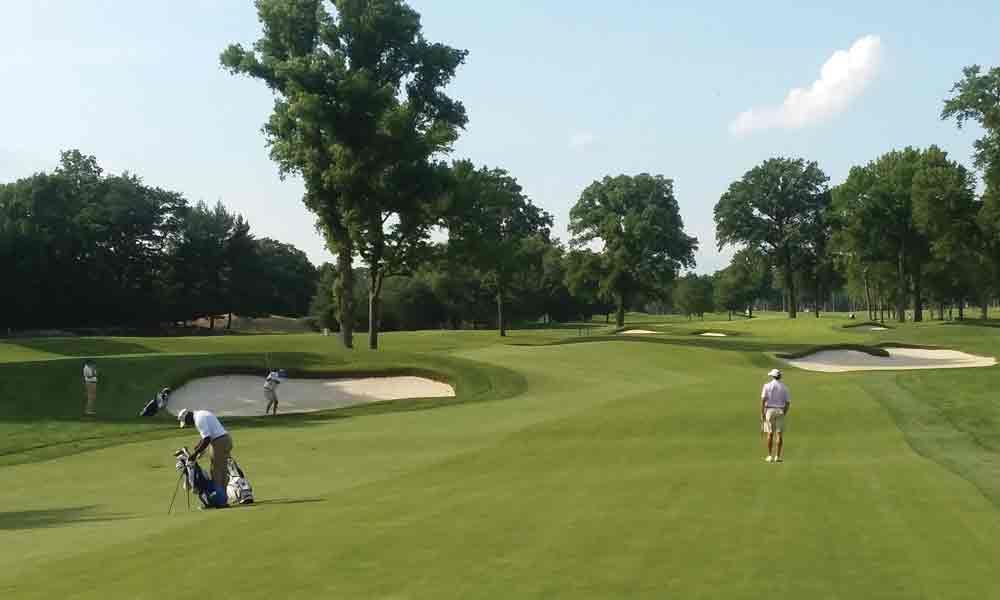 Tucked cozily in a verdant Mamaroneck neighborhood, Winged Foot Golf Club has been called by many the greatest 36-hole golf facility in America.

Those people may seriously understate the case.

The incomparable grandeur of historic majors, over a century of other PGA and USGA championships, and a commitment to promoting excellent amateur events makes Winged Foot’s contributions to American golf all but unparalleled. The West and East Courses sparkle in the early morning sunshine and burn with a ruddy afterglow in the gloaming. It’s a stirring site watching the full moon rise over the Gothic clubhouse or to see a double rainbow flower majestically over its fairways.

Yet the beauty and history hide fearsome peril, for nowhere do victory and disaster sleep so closely cheek and jowl than they do Winged Foot. Your Author once wrote a poem about it: The Ghost of U.S. Opens Past. Part of it went like this:

Of cruel and mighty Winged Foot now to you I sadly sing,
And all the lost and broken men who felt her deadly sting,
Who wander now as shadows in her darkness ever more
To roam her haunted passageways forsaken and forlorn.
But chief among the cursed souls that in that valley dwell,
A phantasm malevolent, most terrible and fell,
The Ghost of U.S. Opens Past is her most deadly shade.
All those it beckons to, are doomed to helplessly obey.
And to the Champions’ Graveyard this Unconquerable King
Our greatest heroes in defeat inexorably brings.

Yes, Winged Foot is the Yankee Stadium of golf, where all the game’s greatest players have come to compete, but it is also the Graveyard of Champions, erecting tombstones for the likes of Jack Nicklaus, Tiger Woods, Ben Hogan, Sam Snead, Arnold Palmer, Tom Watson, Greg Norman and, most recently, Phil Mickelson. Roughly 70 majors combined between them, but none of them ever won a U.S. Open or U.S. Amateur at Winged Foot.

“That’s what is so compelling about Winged Foot,” stated Director of Golf Courses Stephen Rabideau. “The courses never let up, so you can’t either, whether it’s the U.S. Open or the club championship.”

It’s a monumental responsibility that Rabideau shoulders, but he’s proven time and again to be an Atlas among superintendents: stewarding a club with as much history as Winged Foot – much of it Shakespearean-in-magnitude drama – into the 21st century while keeping conditions absolutely perfect for both national level competitions and ordinary member play. To do that, he walks both courses for close to three hours every single morning, carefully observing every blade of grass. Winged Foot, after all, is the golf equivalent of holy ground. The West Course will host its sixth U.S. Open in 2020; only Oakmont and Baltusrol have hosted the tournament more times. Not to be outdone by its more famous sibling, the East Course has hosted the U.S. Women’s Open twice and the U.S. Senior Open. Winged Foot has also hosted the U.S. Amateur twice, with the tournament being contested on both courses.

“The difference between a U.S. Open and member play is simple. It’s the rough…rough and the length of the golf course,” he notes. “For a U.S. Open, the idea is to test the best 154 players in golf for a week, but you can’t play that every day.”

Rabideau is right, of course. Most people can’t muscle out of 4-1/2-to-6 inch rough, nor putt on greens hitting 13 or more on the stimpmeter. You’d have 5-1/2 or even six-hour rounds with those conditions.

“That’s not enjoyable for anyone. Plus the turf can’t sustain those green speeds and that stress perennially. For one week it’s fine – a U.S. Open Championship or an Anderson Memorial Four-ball, for example. But it’s too difficult to keep the speeds at 12-13 all the time,” Rabideau concluded firmly. “11.5-12 is just fine for member play, a little faster for club championships and the Anderson, and faster still for the Open.”

Interestingly, Rabideau and his crackerjack grounds crew maintain the same mowing heights all the time for greens, tees, and fairways. Conditions between events are simply a matter of an extra roll or two. The Anderson Memorial Four-ball, for example, is treated as a prelude to the U.S. Open. The Anderson was the de facto National Four-ball long before there was a USGA Four-ball, and it’s still one of the premiere amateur events in the world. 156 two-man teams travel from the greatest clubs in the world for two days of stroke play over both the East and West courses in hope of making the 16-team championship match play bracket. The match play portion of the tournament rotates yearly between the West and East courses.

“It’s held in June the weekend before the U.S. Open, so for years it’s been our barometer for the Open. We try to emulate Open conditions for the Anderson,” Rabideau confided.

They succeeded beyond all expectations in that score. The entire golf design world is in awe of not only the club’s conditioning, but also Rabideau and team’s precision in bringing the club’s new master plan to life.

“We recently underwent a restoration project on all 36 holes under Gil Hanse, and we turned this Cadillac into a Ferrari,” Rabideau quipped.

Keeping true to architect A.W. Tillinghasts’s original look and strategic intent, they rebuilt every bunker, green, and tee to their full size and scale, moving the bunkers downrange somewhat to adapt to modern equipment.

“We then rebuilt the greens: we took them apart and then put them back to the exact same contours. We laser scanned them, stripped off the tops, put them on a tarp, then shelled out the greens using a surveying instrument called the total robotic station. Then we put the greenback exactly the way it was, using a vertical offset of 16” to shell the green out to make the floor 16” lower,” Rabideau explained. “We did the drainage to USGA guidelines, installed sub air, then built it back up with gravel layer, added mix, and then did the strike off to get the green exact. That was quite labor-intensive. It took a 5-6 man crew 30 hours. We did every foot of every green exactly accurate – .005 of surveying foot was our margin of error.”

They also updated the entire drainage system – over 40 miles of pipe – and the work paid dividends immediately. Several times during play this spring a storm out of the pages of the Last Judgment rolled across the Westchester skyline, streaming a drenching downpour on the course. Each time, golfers were back out playing a half-hour after the siren sounded “All clear.”

“They did an awesome job on a monumental project,” said one member, who spoke on condition of anonymity. “Both courses are always in top shape…absolutely phenomenal.”

It quite a feel-good story actually – Rabideau fell into golf by accident.

“I needed a job!” he recalled, laughing. “I dropped out of Westfield State College and didn’t know what I wanted to do, so I worked at a nine-hole course in Petersham, Mass. We had three guys on staff. That was my entrée to the game, and that’s how I found out you could go to school for turfgrass maintenance.”
After studying turfgrass at UMass Stockbridge School of Agriculture and plant and soil sciences at UMass, Rabideau interned at fabled Farm Neck, the Martha’s Vineyard public course often frequented by presidents. Pretty chichi!

Next came a stint at Seawane, a Devereux Emmet club in the Five Towns area of greater New York City, where he met Stephen Kay, New York City-born and bred golf course architect.

“Steve was terrific there, and then he went on to his first head superintendent job at one of my original designs, Hamlet Golf and Country Club,” Kay recalled fondly, praising Rabideau’s knowledge of Golden Age golf design and his superb talent as a player.

Now Rabideau is stewarding history. Every day at Winged Foot is both Christmas and Halloween, it just depends what side of the outcome you were on. Someone’s memories will be joyful – a golf life event! They won at Winged Foot! – and someone’s memory will be dismal and somber. Another tombstone erected in the Graveyard of Champions. Oh well: with Nicklaus, Woods, and Hogan for company, at least they won’t be lonely. After all, no matter the tournament, Winged Foot always wins. Steve and his team make sure of that.

“It’s all about managing expectations,” he surmised simply. “We are a busy place, and with the passion of these members and how much they love the club, the game, and the history, it deserves to be protected and preserved.”